Fate doesn't always know what's meant to be, especially when matters of time step in, as seen throughout this compelling time travel romance that will keep you guessing until the very end.  Keep reading to get a tempting taste of The Time Traveling Matchmaker by Janie Emaus, along with the author's thoughts on the appeal of these kinds of romances, then learn even more about this book by visiting the other sites hosting this tour.  In honor of this first installment in The Time Traveling Matchmakers series make sure to fill out the form below for the chance to win a $50 bookstore GC too!
Words Of Wisdom From Ms. Emaus Regarding Why Readers Are Drawn To Time Travel Romances Along With Her Favorites....
The element of traveling through time is a universal theme. Who among us has not wished to travel back to our youth and walk through a different door into the future? To get a glimpse of how Bobby would have given us a better life than Howard. Or wished we could travel back in time and help an ancestor survive an illness, or prevent a tragedy from occurring? And of course, when it comes to romance, the possibilities are limitless. Time travel romance feeds our imagination like no other genre can.
My fascination with time travel started with A Wrinkle in Time. After reading that book, I was hooked. One of my all-time favorite books is The Time Traveler’s Wife. I was in awe of how Audrey Niffenegger made such a complicated plot work. I also enjoyed Oona Out of Order by Margarita Montimore, The Dream Daughter by Diane Chamberlain. And of course, 11/22/63 by Stephen King. 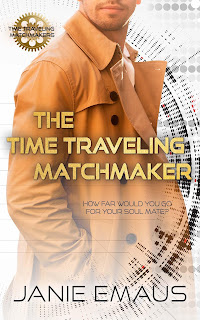 In The Time Traveling Matchmaker, love takes on a new meaning when soul mates are brought together through time and space.
Like every goal-oriented twenty-something, Jessica Singleton, an aspiring filmmaker, is obsessed with finding her future as quickly as possible. What she doesn't know is that the future is obsessed with finding her, too. Renn Porter, an agent with Time Traveling Matchmaker's Inc, blasts back in time - and into her life - in order to transport Jessica to the soul mate who has paid for this service...in the future. But things turn dangerous when it's revealed that Renn has been sent after his own soul mate.Caught between two times, Jessica and Renn must struggle to stay alive. Falling in love is the biggest risk either of them has ever taken - because, as they are destined to learn, the very existence of Time Traveling Matchmakers, Inc. rests in Jessica's hands.
EXCERPT:
Ever was a word that didn’t do well alone. It goes much better with happily and after. The way my life used to be. The way I thought it never would be again after David, and then along came Renn. And the world opened up, even better than before.
His lips. His touch. His eyes. His voice. There wasn’t room in my mind for thoughts of anything else.
It didn’t matter that he claimed he came from the future. Maybe he did. So many things in this world defy logic. Especially love.
Please, God, bring him back to me.
My stomach growled. I opened the fridge again and picked up the healthiest looking apple, one without any bruises.
The apple tasted sour. I spit the skin into my hand and tossed the whole thing in the trash. The fabric in my pocket grew warm.
“Jessica.”
I spun around. Renn leaned against the wall, his trench coat open to expose a silky blue shirt. His lemony scent drifted into the room.
“It’s you,” I said, stating the obvious and feeling foolish for doing so.
His smile filled me with lightness.
“It’s me,” he said, as if he’d just returned from the store. In fact, he held a bag of donuts.
Donuts! He vanishes out of the bathroom and materializes out of thin air the next day with donuts?
A second later, the bag fell to the ground, and I was in his arms, kissing him. Putting the ever back into my life.
BUY LINKS:  AMAZON  |  BN  |  BOOKSHOP

AUTHOR INFO:
Janie Emaus believes when the world is falling apart, we’re just one laugh away from putting it together again. The Time Traveling Matchmaker is her debut adult novel. She is also the author of the blended holiday picture books, Latkes for Santa Claus, and the forthcoming Matzo Balls & Easter Eggs. Her essays, stories and articles have been published in numerous magazines, anthologies, and websites. In 2016 she won an honorary mention in the Erma Bombeck Writing competition. To learn more about Janie visit her HERE.
FACEBOOK  |  TWITTER  |  MEDIUM  |  INSTAGRAM
**********GIVEAWAY**********
a Rafflecopter giveaway
at August 05, 2022