Book Excerpt Reveal for Never Look Back by A. L. Jackson (GIVEAWAYS)….. 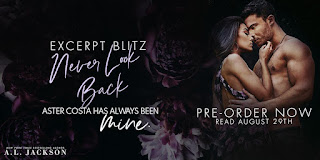 It's a love/hate connection between two people carrying lots of emotional baggage from the past in this sensual, second chance romance.  Keep reading to get a tempting glimpse of Never Look Back by A. L. Jackson, then start counting down the days until this third installment in the Redemption Hills series hits bookshelves on August 29th.  To make the wait a bit less painful be sure to enter the great giveaways below! 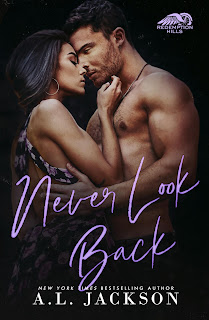 From NYT and USA Today bestselling author A.L. Jackson comes an enemies-to-lovers, close-proximity, second-chance romance...
Logan Lawson won me in a bet.The second I saw him sitting at the illegal card table, I knew I was in trouble.Years ago, he sealed my fate and condemned me to a life I didn’t want to lead.Yet he’s filled with untamed fury and thirsting for vengeance against the husband I hate.Aster Costa is everything I never should have wanted.The second she showed with her pompous, prick of a husband, I should have gotten up and walked. But there’s no looking away from the woman who wrecked me.Worse, I can’t stop myself from plotting to get her back.I want nothing more than to be free of my husband.I’m afraid Logan Lawson is the only one who can make that happen.He might hate me for our past, but now it’s me on my knees begging for help.Finding each other in the middle of it wasn’t supposed to be part of the bargain.But once Logan touches me, I’m gone. A torch is rekindled. A fire is lit.Aster Costa has always been mine.And this time, no matter the cost, I won’t give her back... 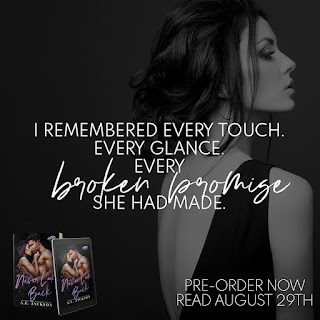 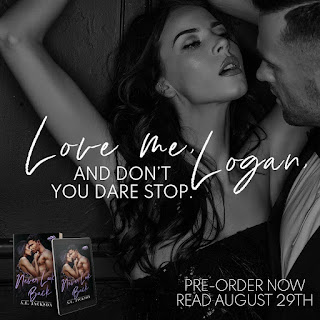 ***VOTE FOR THIS BOOK TO BE THE MOST ANTICIPATED RELEASE OF THE MONTH ON GOODREADS here.***

AUTHOR INFO:
A.L. Jackson is the New York Times & USA Today Bestselling author of contemporary romance. She writes emotional, sexy, heart-filled stories about boys who usually like to be a little bit bad.
Her bestselling series include THE REGRET SERIES, CLOSER TO YOU, BLEEDING STARS, FIGHT FOR ME, CONFESSIONS OF THE HEART, FALLING STARS and REDEMPTION HILLS novels. Watch out for her upcoming stand-alone, NEVER LOOK BACK, releasing August 29th!
If she’s not writing, you can find her hanging out by the pool with her family, sipping cocktails with her friends, or of course with her nose buried in a book.
Be sure not to miss new releases and sales from A.L. Jackson - Sign up to receive her newsletter HERE or text “aljackson” to 33222 to receive short but sweet updates on all the important news.
FACEBOOK  |  READER GROUP  |  AMAZON AUTHOR PAGE  |  BOOKBUB  |  TWITTER  |  INSTAGRAM  |  TIK TOK
**********GIVEAWAYS********** 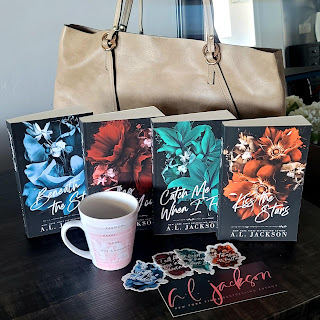 VISIT here FOR THE CHANCE TO WIN A SIGNED SET OF THE ALTERNATE COVERS TO THE FALLING STARS SERIES ALONG WITH OTHER AWESOME GOODIES!  OPEN TO US ENTRANTS ONLY.  ENDS ON 8/29! 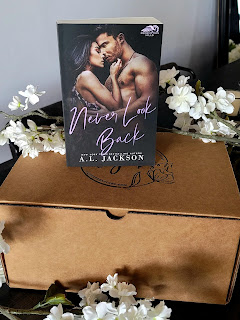 ***WANT A SIGNED PAPERBACK OR A NEVER LOOK BACK RELEASE BOX?  THE BOX INCLUDES A SIGNED BOOK, PREMIUM MERCHANDISE, AND OTHER AWESOME GOODIES!  THE BOX IS PACKED WITH THE CUTEST MERCH AND IT'S ALL SO PERFECT THAT I'M JEALOUS OF THOSE WHO GET ONE OF THESE LIMITED QUANTITY BOXES.  VISIT here TO ORDER WHILE SUPPLIES LAST.***
at August 18, 2022