Fans of MC romances have much to celebrate with the release of River’s Guilt by Monique Orgeron, a book set within the world of the Crescent Kings MC.  Keep reading to get a tempting taste of this story of loss and starting over as past loves make their way back to one another.  You'll also get my impressions of this tale which will have you wanting to add it to your bookshelf too! 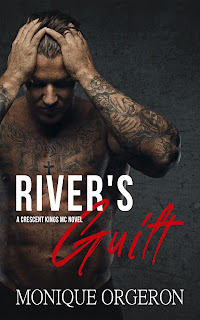 River
I was driven by a singular goal — to feel freedom whip across my face while ruling the Kings with my best friend.Things changed when he got himself killed.He ruined everything by flying off the handle, reaching too far, too fast, without a care for what his death would do to those left behind.For years I’ve been the one taking on his responsibilities, protecting his wife and son, feeling the strain of my lost freedom.Yes, things changed, but some things stayed the same.I still owe him, and I still battle with the guilt and shame of loving another man’s woman. My best friend’s wife.ReginaIn all my years with the Crescent Kings, no one, not one freaking man, has enticed me more than my late husband. No one...but his best friend, River.One is dead, and the other wouldn’t touch me if his life depended on it. He looks at me like I’m a seductress bringing forth his damnation.There are moments, though, when I catch his gaze and see something I haven’t seen in years. I see his own unfulfilled desire.Touch me, I beg silently and wait with bated breath for the day he will finally let go of his guilt. 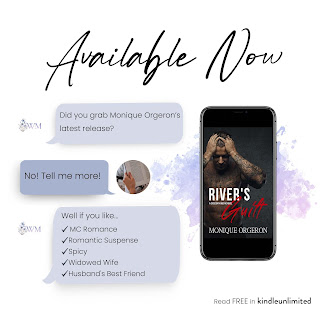 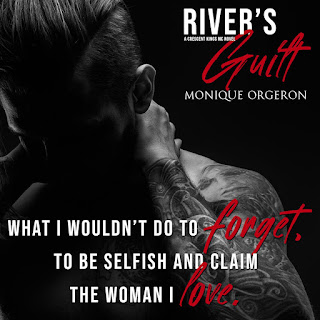 MY IMPRESSIONS OF THIS BOOK:
From the first page to the last this was a book that will pull readers into the world of the Crescent Kings MC wholeheartedly.  It's an emotional journey of grief, starting over, and redefining who you are after a major loss.  This book will pull at every heartstring while taking you on the ride of a lifetime as the death of one man leaves his wife and best friend navigating new feelings, a heartbreaking push/pull that sometimes frustrates while causing a few tears along the way.  The grittiness of the MC lifestyle is also on display as roles have shifted there too.  Throughout the story the author showed the MC lifestyle in a realistic way, showing the support of the brotherhood as well as the action and suspense of surviving in the gritty world of MCs.
Regina has mourned her husband for years, but is ready to finally move on.  It's not easy to do that though when everything around you reminds you of him.  The Club he once ran is a support to her and her son, but it also sometimes feels as if it's smothering her.  After years of devoting her life to the Club she finally wants to make herself a priority, be the woman she used to be.  The reigniting of her attraction to River is part of that remaking of herself, but his devotion to her late husband has him keeping his distance.  Regina's a determined woman though, a strong and gutsy woman who knows what she wants and goes after it with eyes wide open.  She's a wonderful heroine, someone you can see yourself friends with, and I was rooting for her every step of the way.
River's the typical biker, a bit dark and occasionally morally ambiguous.  The Club, the brotherhood, is everything to him and he would never do anything to jeopardize his place as VP.  Years ago he and Regina were in love, but the moment the Club Prez decided he wanted her River stepped away which left him watching over Regina from afar and makes it difficult for him to do anything differently now.  His actions back then, and his stubbornness now, had me wanting to slap him repeatedly.  He clearly wanted Regina but stood in the way of his own happiness, hurting her along the way throughout their rocky road to HEA.  He's definitely not a White Knight in this story, he's definitely full of greys, but I still found myself drawn to him.  He's weighed down by his guilt, trapped by his commitment to his dead Prez (and friend), and his inner conflict was palpable.  He and Regina were meant to be though and through many twists and turns, a few tears, and a lot of angst, they finally get their hard-fought HEA.
This was an emotionally engaging read, realistic in its depiction of Club life and loss.  The main couple has a lot of baggage to work through but the journey they undertook kept me glued to the pages through steamy and heartbreaking moments.  The secondary characters were equally as captivating and I'm particularly looking forward to Regina's son Griff taking center stage one day.  This is my first time reading Ms. Orgeron but it definitely won't be my last as the world she crafted here is an unforgettable one and has me wanting to see more of it.
My rating for this is a B+
*I got this book from the author for review in exchange for my honest opinion. 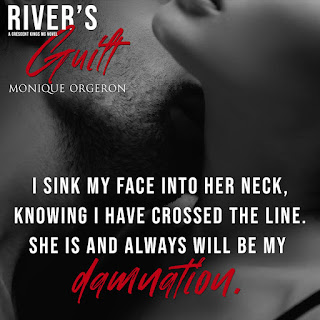 AUTHOR INFO:
Hi everyone and thank you for checking out my WEBSITE. Let me tell you a little something about myself. I am very proud to be from the great state of Louisiana. Laissez Les Bons Temps Rouler! I have been married to my wonderful husband since 1991 and together we have two beautiful daughters.
After being a stay-at-home mom for almost 23 years, I turned my love of reading into a passion for writing. I am constantly telling people, I have the best job in the world because I write about love and passion. I give you and myself something to fantasize about. What can possibly be better?
If you have not read my stories yet, I write steamy contemporary/suspense romance. I've been published since November of 2017. With my first book Art of Seduction. I promise to always try my hardest to take you on a roller coaster ride of emotions. My books will make you cry, laugh at times, and make you yell, "Oh shit, I didn't see that coming!" or they will make you scream, "What the hell!" I will sometimes even get you to want to throw your Kindle out the window but by the end of them. You will love me and the books, at least that's the goal!
at August 20, 2022