One night of sensual revenge leads to unexpected long-term change for two people betrayed by love in the past in this contemporary romance that will keep readers glued to the pages.  Keep reading to get a tempting taste of Just One Kiss by Carly Phillips, along with my impressions of it, then add this sixth installment in The Kingston Family series to your bookshelf! 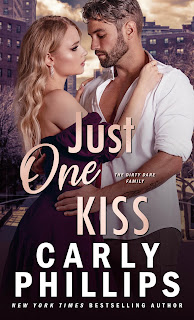 It was just supposed to be one fun night of revenge sex.It turned into a second. Then a third.
Now Mother Nature is having the last word—with a secret baby surprise!Jade Dare has done everything in her power to overcome her mother’s unstable influence. Changed her name. Became a success. Vowed never to risk passing on the potential for inherited pain. What has it gotten her? One fiancé who wanted her for money. A second who cheated on her with his brother’s wife.Now she's sworn off men. Or at least off serious relationships. But when the chance to indulge in a little revenge sex with a man she’s secretly fantasized about arrives, she jumps in. Only to land heart-first into a case of the feels she can’t bring herself to trust.Knox Sinclair always suspected he liked his brother’s fiancé a little too much, that’s why he kept his hands to himself. But with all ties broken and Jade all too willing, a one-night stand with a side of payback sounds like a damned good idea.Except one night isn’t nearly enough.. But while Knox is busy convincing Jade they have a chance at forever, the past is planning one last parting shot. 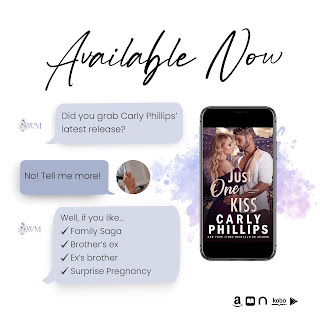 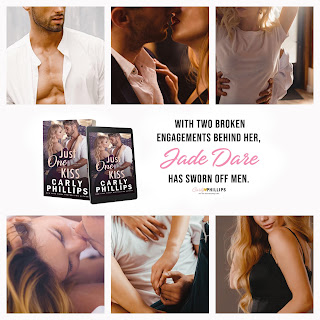 MY IMPRESSIONS OF THIS BOOK:
Carly Phillips's Dare series has been a reliably entertaining collection of books for years and this latest release shows itself to be a worthy addition to the family.  Bringing back familiar characters who were previously put through the wringer, it's wonderful to see them finally get the HEA they deserve in a steamy tale that touches on a few heavy issues along the way.
Jade Dare has been unlucky in love with two broken engagements in her past, one due to finding out he just wanted her money and one due to cheating on her with his brother's wife.  That most recent betrayal has turned her off men completely and has her devoting herself to her career as an event planner.  She can't leave her past behind her completely though when her ex's brother re-enters her life as she's planning his sister's wedding.  Jade might not want a man in her life forever, but she's more than happy to spend one night with the sexy Knox.  One night soon becomes more though, especially when she ends up pregnant.  From that moment on life changes irrevocably for Jade as she deals with fears over what her mother's illness means for her child, along with a man determined to make the three of them a family.  Through it all Jade's a likable heroine who's had a difficult life due to her mother's mental illness and men who never wanted her for herself.  She’s the kind of heroine you can relate to while cheering her on to embrace the love so blatantly being offered to her by Knox.
Knox Sinclair always felt an attraction to Jade, from the moment they first met there was a spark, but he knew he had to keep his distance.  While helping his sister plan her wedding though he's brought back into Jade's life...and this time he has no plans on leaving.  Jumping at the chance to have one night with her has him making the most of it, making her want him as much as he wants her, which ultimately leads to a life-changing event.  Knox might've been shocked by his impending fatherhood at first, but he quickly went all in, determined to make Jade his forever in a heartfelt journey to HEA.
This was a couple worth rooting for!  They were both unlucky in love, with more to them than meets the eye, and together readers were able to see what was below the surface of what they showed the world.  Knox was immensely appealing, sweet and sexy, as well as determined.  Jade had a tough exterior but below the surface were fears over what her mother's mental illness meant for her, and ultimately her child's, futures.  These fears were understandable and addressed by the author in a respectful way that had me wanting Knox to just hug Jade's worries away.  From the first page to the last this was a satisfying story that will tick many of the boxes for readers.  Here's to many more Dare romances in the future!
My rating for this is a B+
*I got this book from the author for review in exchange for my honest opinion. 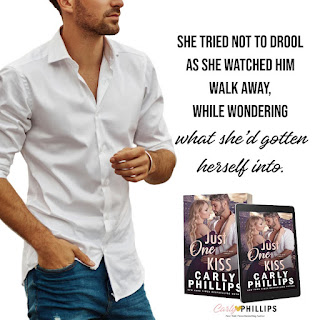 AUTHOR INFO:
NY Times, Wall Street Journal, and USA Today Bestseller, Carly Phillips gives her readers Alphalicious heroes to swoon for and romance to set your heart on fire. She married her college sweetheart and lives in Purchase, NY along with her three crazy dogs: two wheaten terriers and a mutant Havanese, who are featured on her Facebook and Instagram. The author of 50 romance novels, she has raised two incredible daughters who put up with having a mom as a full time writer. Carly’s book, The Bachelor, was chosen by Kelly Ripa as a romance club pick and was the first romance on a nationally televised book club. Carly loves social media and interacting with her readers. Want to keep up with Carly? Sign up for her newsletter and receive TWO FREE books HERE.
BOOKBUB AUTHOR PAGE  |  AMAZON AUTHOR PAGE  |  INSTAGRAM  |  FACEBOOK  |  TWITTER  |  WEBSITE  |  GOODREADS AUTHOR PAGE
at August 16, 2022