Review for Darklands: A Vampire's Tale by Donna Burgess

In preparation for tomorrow's visit by the amazing author, Donna Burgess, I was lucky enough to obtain a copy of her new book for review.  I hope my review gives you an idea of what Donna's writing is all about and that you return tomorrow for my interview with Donna where you learn about her on a personal level. 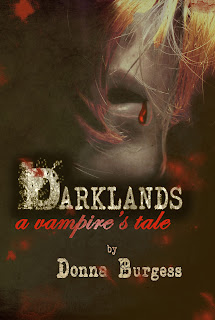 The vampires in Donna Burgess' new book Darklands: A Vampire's Tale are no Edward Cullen.  They're not reciting poetry or showing off their sparkles.  They're dark and gritty and get their food the old fashioned way...directly from the vein.

Devin McCree has been a vampire for a very long time and has had much love and loss during that time.  From the moment he sees Susan Archer he decides he doesn't want to be alone any longer, but a romantic interlude goes awry and lands Devin the label of murderer.  He continues watching her through the years and one night comes crashing back into her life and changes it forever.  Susan's forever changed by her time with Devin too, her brother died the night they first met and the blame her parents place on her has caused her to close her emotions off.  She's also noticed other subtle changes, like her being stronger than others on the police force and not showing any physical signs of aging.  Once Devin reenters her life he informs her of what she is and teaches her to embrace her new life.  What Devin doesn't tell her is that a vampire hunter with vengeance on his mind has been following him for years bent on making his life miserable, and she's the latest pawn in the decades long game they've been playing.  Not only is Susan now at risk, but so too is the human doctor who loves her and tries to follow her into her new life.  As Devin and the vampire hunter Kasper continue their battle, no one is safe and much blood will be spilled before one of them is named victor.

Donna's story is intense with strong characters and a richly drawn background story.  She pulls no punches in showing how vampires really are, their animal side and feelings of superiority aren't glossed over.  They're creatures just trying to survive and make sense of who they are once they've transformed.

Susan makes a great heroine since she doesn't wait to be saved.  Her own strength, both inside and out, gets her through the traumatic events that happen to her.  She doesn't back down from a fight and embraces her new life wholeheartedly.  Even though life has made her an extremely serious-minded person, she still shows flashes of humor especially when first discovering her new abilities.

Devin is a very conflicted character.  His feelings regarding his vampirism change often and he goes from hating himself to loving what he's become.  He's a sad character that's lost loved ones as well as hurt loved ones and degraded himself to stay alive.  He's not a confrontational character like Susan is, and that's where I have issues with him.  No matter how much harm comes to those he cares about at the hands of Kasper, he won't fight back.  He'd rather run than have a showdown with Kasper.  I'm not sure I understand his reasons for not going after Kasper, but as this series progresses I hope we'll dig deeper into his psyche to learn why.

Along with characters to root for, a good story must have characters that you loathe.  Kasper Jacobsen is just such a character and does some very despicable things.  Even though he's a vampire himself he goes after other vampires with a single-minded obsession and uses very bloodthirsty methods to end their existence.  He and Devin have a complicated history that has tainted both of them.  They seem to have a symbiotic relationship that adds an element of danger to the storyline.

This was an engrossing story from beginning to end.  The bloodletting is intense as is the sex and it draws you in deeply to the storyline and doesn't let go until the final page, which ends on a cliffhanger.  I highly recommend this to those looking for an exciting read with intense action and intriguing characters.  Be prepared for the ending, which leaves you clamoring for more and I encourage Ms. Burgess to write faster since I'm dying to find out who survived.

*I received this book from the author via Bewitching Book Tours for review and as part of her book tour.
at February 01, 2011

***Win 5 sets of books in honor of Enjoy the View by Sarah Morgenthaler here. Ends 2/6.