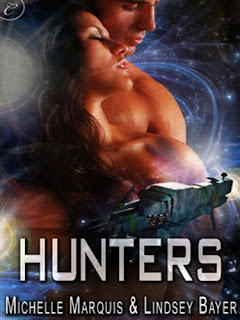 This is a sexy and rip roarin' fun sci-fi story about rival bounty hunters forced to work together to catch a deadly predator.  Along the way they learn new things about each other and soon find that the thing they've been missing in their lives has been in front of them all along.

Harmony Knox is the galaxy's best bounty hunter, with the exception of one alien who got away who saw to it that she ended up in prison for the last year.  After being released her first task is to hunt down Prime, the alien who ruined her perfect record.  Before she can do that though, she needs to get her ship back.  To do that she has to rely on fellow bounty hunter Bart Tanner.  As a woman who's used to doing things on her own, Bart is a serious irritant to her way of doing things.  She soon finds out how useful he can be though as he saves her from assassins hired by Prime while keeping her entertained with his sexual prowess.  It soon becomes apparent how good they are together and when tragedy strikes will Harmony put aside momentary revenge for something extraordinary and long-term.

I really enjoyed this book!  Exciting action sequences flow nicely into steamy romantic interludes.  The sex scenes employ a bit of humor as well as some sweat inducing moment.  Their connection starts in the bedroom but soon moves to the outside world where they become an unstoppable team.

Harmony is a strong female character who likes to do things her own way.  She's a Kirillian, who by nature are known for their intellectual abilities, with a family who don't express their emotions.  She was easily bored by her staid life and purposely chose a career the exact opposite to what she was expected to do.  She's always felt a hole in her life and it's so romantic watching Tanner work his way into her heart  When it matters most she casts aside her past and shows strong human emotion to choose love over reputation.  She decides the future is more important than the past.

Bart Tanner is a character I swooned over the minute he came on the scene.  Tattooed and full of emotional scars due to being imprisoned by the Kirillians years ago and forced to fight in the cage to stay alive, Tanner at first despises Harmony and plans to hurt her emotionally as payback.  I ached for all that Tanner went through at the hands of the Kirillians and could understand why he wanted payback and I applaud that he quickly threw away his plan for vengeance the minute he realized how he felt about Harmony.   Other books would have drawn that out to create tension and I'm thrilled that wasn't the case here.  Tanner is sexy and funny and has no problem admitting his feelings.  He's the perfect hero and he was a big reason as to why I loved this book.

I can't say enough good things about this book.  Great action, great romance, and a fun couple with hardly any annoying melodrama along the way.  Definitely take a chance on this book, it will leave a smile on your face.