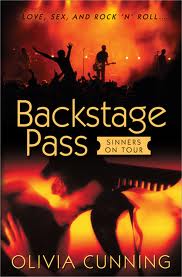 It's been months since Brian Sinclair, lead guitarist for the famous rock band, Sinners, composed anything. Unable to write the music that once flowed so naturally, Brian is lost without his musical mojo. But when sexy psychology professor Myrna Evans comes on tour to study groupie mentality, Brian may have found the spark he needs to reignite his musical genius. When lust turns to love, will Brian be able to convince Myrna that what they have is more than just a fling, and that now that he's found his heart's muse, he doesn't want to live without her?


This is the first in a series of books focusing on the sexy men who make up the hard rockin' band Sinners.  I'm a bit late to the party but now that I've been introduced to Brian Sinclair, Sedric Lionheart, Jace Seymour, Eric Sticks, and Trey Mills I can now proclaim myself a groupie.
Backstage Pass begins by introducing us to human sexuality professor Myrna Evans who meets the band in a bar at a convention with sparks immediately flying between her and lead guitarist Brian.  Her ex-husband didn't like her exuberance in bed, but Brian and her are a perfect match.  Their lovemaking is combustible and, for Brian's writer's block, their lovemaking leads them to create beautiful music together.  When Brian uses Myrna's body as his music sheet, not only is it hot but shows his connection to her as his musical muse.  While it might seem that they got together quickly, one can't ignore the heat between them.  They clicked the moment their eyes met and I found their relationship to be very believable.
The boys in the band have an intriguing relationship with one another.  They're like brothers most times in their little squabbles with other moments of real anger mostly focused on Sed (featured in the next book in this series) and his constant sleeping around, even with his bandmates' girlfriends.  Trey's relationship with Brian is also different than amongst the others in that Trey loves him and is a bit jealous of Myrna getting to be with Brian.  Luckily Myrna's mothering tendencies win the boys over and they soon start picturing her tucking them into bed instead of climbing into bed with them.
Unlike Myrna who's afraid to show her emotions, Brian wears his heart on his sleeve and tends to easily get his heart broken.  He admits his feelings about Myrna early on and while it seems presumptuous at first it's also very cute.  His parents are too caught up in their own fame to praise him for his achievements and its sad to see him feel like a second fiddle around those who should be proud of him.  Seeing Myrna stick up for him cements her connection to Brian for everyone and made me like her even more.
Myrna's more leery when it comes to emotions because of her ex-husband's smothering of her true wild nature.  Having him become a dangerous stalker was a part of the storyline that I didn't enjoy and found to be tacked on and stereotypical and purely used as a plot device to reunite Brian and Myrna.
The sexual interludes in this story are hot and nicely spaced throughout the story to keep things exciting.  Brian's a sweet and sexy character with a lot of pressure on him and it's hard watching his struggles.  Myrna hides behind her true feelings but when it comes to Brian she definitely puts herself out there to be supportive of him.  The rest of the band members each have a unique personality with a touch of mysteriousness that has me excited for future installments of this series.
So if you haven't yet entered the world of these rock gods there's still plenty of time to discover what all the excitement is about.  Next up in the Sinners on Tour series is bad boy Sedric Lionheart and his story is even steamier than this.
My rating for this is an A.
at October 02, 2011