Before we get to Lisa's great guest post and the two giveaways associated with her visit I want to thank Goddess Fish Promotions for letting me be a part of this tour.  And thanks too to Lisa who can't be here in person because of being called out of town unexpectedly but gave me a great guest post before leaving.  So enjoy learning about Lisa's new book and make sure to enter the giveaways before you leave.

MILITARY HEROES AND WHY WE LOVE THEM
You mean besides ogling  covers of buff guys with dog tags over bulging pecs holding sexy black guns?
Just kidding.
We all love alpha heroes, but you have to look at what that really means. In nature, the alpha of the pack has no agenda other than dominance. In humans, that drive to dominance must be linked to something else, otherwise you run into that territory of women who run screaming from an alpha male, because the dominance is the kind that hurts.
My men, the heroes in my books, don’t want to dominate others, per se. They belong to the tribe of men (and women) who have superior skills and are natural leaders and place those skills and abilities at the service of their community.
An animal alpha male, a wolf or a dog, seeks dominance for its own sake. They have a drive, embedded in their DNA, to prevail. Mostly these are strong, young specimens who win battles on their way up the ladder. There are plenty of human alpha males like that. You see them in corporate offices and banks all the time. As a matter of fact, there are some who say that the entire banking crisis was brought about by roomfuls of alpha males, cut off from any softening effects, doubling down on their bets to be big man on the corporate floor. Legend has it that a team of psychologists were testing traders for testosterone during the crazy final days of wild gambling/banking and found testosterone levels to the skies.
That’s not my alpha male at all.
When I decided to write military heroes, I knew I needed to do research, since I hadn’t grown up in a military family. So I read. Books about the modern military but most of all, memoirs. And man, is that fascinating reading. The US has undoubtedly the most intelligent educated military ever in the history of the world. The books I read were hair-raising, inspiring, often grimly funny. These guys are the tip of the spear, the sharp end of the stick. Call it what you will—basically their lives are on the line every day.
So—alphas. The thing about military heroes is that you know that they haven’t dedicated their talents to making money or impressing the easily impressed. No, they have chosen the hard path of duty and service. A woman knows that these are not fly-by-night men, easily distracted from their vows. These are hard men who have chosen to do hard things and blow me down if that isn’t more attractive than the fancy suit and Gucci shoes of the corporate types.
Plus, of course, they can kill a man with their pinkie. Or at least the special ops guys can. The others will just shoot you if you mess with them. That’s pretty attractive too.
I read something interesting in the newspapers on September 11, commemorating the tenth anniversary of that awful day. Among the many stories the New York Times printed, they recounted the story of a Morgan Stanley stockbroker who decided he couldn’t stay in an office, he had to serve. Morgan Stanley gave their blessing and said he’d have a job when he came back. He became a Marine and a helicopter pilot and flew combat missions for eight years in Iraq. And sure enough, Morgan Stanley kept his job.
He said he wasn’t freaking at the falling markets. Bad markets couldn’t make him freak. He’d been to war, nothing would ever scare him again.
My kind of guy.
I hope you enjoy my Navy SEAL Max Wright, an incredibly righteous dude, wounded and no longer in the service, but still able to fight for his lady.
FATAL HEAT comes out October 4, by Avon Impulse. 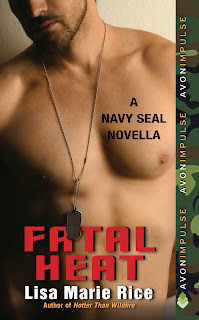 Former Navy SEAL Max Wright is out of the SEAL Teams forever after being almost killed by an Afghani RPG. He retreats to his former XO's beach house to lick his wounds. He wants to snarl at the world but finds it hard to snarl at his new neighbor, his XO's beautiful goddaughter, Paige Waring, who also comes with a ridiculously likable, totally undisciplined dog.

As a plant geneticist, Paige has always been focused on her work, but when she and her dog run into Max, she recognizes the lonely, shattered man behind the rugged exterior. To her mind, sexiness always comes with a white lab coat, not with acres of tanned muscle and a tough mind-set.

When Paige's work becomes the target of criminals and she’s abducted, Max springs into action. Though still terribly wounded, this tough as nails SEAL goes on his last mission—stopping at nothing to save the woman he loves. 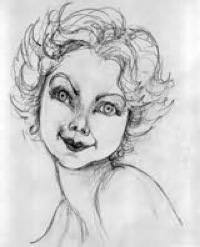 AUTHOR BIO:
Lisa Marie Rice is eternally 30 years old and will never age. She is tall and willowy and beautiful. Men drop at her feet like ripe pears. She has won every major book prize in the world. She is a black belt with advanced degrees in archaeology, nuclear physics, and Tibetan literature. She is a concert pianist. Did I mention her Nobel Prize? Of course, Lisa Marie Rice is a virtual woman and exists only at the keyboard when writing erotic romance. She disappears when the monitor winks off.
That’s my story and I’m sticking to it.
Now isn’t that an interesting bio to have? Isn’t that a thousand times better than saying that I’m a middle-aged, er…woman, no longer in the very, very first flush of youth, who basically sits in front of a computer screen all day in her pajamas?
I am so lucky to be Lisa Marie Rice! There is no literary genre anywhere remotely as exciting and thrilling as erotic romantic suspense. It has absolutely everything: red-hot passion, danger, adventure, heart-stopping love. I cannot begin to tell you how much I enjoy sitting down to the keyboard and bleeding…er, writing my heart out, falling in love with my men over and over and over again.
Well, why not? My men are brave and smart and built. And boy do they love their women! Their women are much more interesting than new weaponry, sports cars, and even plasma TVs in their eyes, and the fascination will last their entire lifetimes, I promise. It’s sex, of course, but also a whole lot more. My heroes genuinely like and admire their women, though in the beginning this is sometimes obscured by blinding lust. Once that first sharp edge of desire is over and they settle down a little—and that will take several years and a kid or two—they’re so bonded with their women that they couldn’t live without them.
And it is so much fun “being” my heroines while writing about them. You may have noticed that most, if not all, of my heroines are artsy in some way, just like me. It just sort of comes out that way. There’s not much calculation when creating my characters: They literally become alive for me and when my character says—I’m a singer or a designer or I love books—well, that’s that.
It’s fabulous sitting here in my not-perfect body and becoming the beautiful young woman that that ornery alpha male is glomming on to. Of course, my heroines are also in dire peril, which is not so much fun. And which is why I’m the writer and not the heroine (give or take a few years and a few pounds).
One true fact: Looking out of my study across my wonderful terrace I see a bright blue line which is the Ionian Sea. And if I had a powerful enough telescope I could see the Greek temple where Pythagoras taught.
http://www.lisamariericebooks.com/
http://www.lisamariericebooks.com/blog/
http://twitter.com/#!/Lisa_Marie_Rice
GIVEAWAY:
There are actually TWO things being given away by Lisa.  The first is strictly related to my site where Lisa is giving away one of her backlist titles in print (her choice) to one person in the US/CAN commenting on this post and is chosen randomly at the end of the tour.  The second giveaway is for a $25 Amazon.com gift certificate and is open to EVERYONE.  At the end of the tour one commenter from all the tour stops will be randomly chosen to receive the gift card.  So the more tour stops you make a comment on, the greater your chances of winning.  A list of other tour stops for Fatal Heat can be found here.  So just comment ONCE and you'll be in the running for two great prizes!
-Please make sure to leave your email with your comment to make it easier to contact the winner.
-Both giveaways end at 11:59 pm on 10/7.
Good luck to everyone!
at October 04, 2011