Review for Working Out the Kinks by Kiki Howell 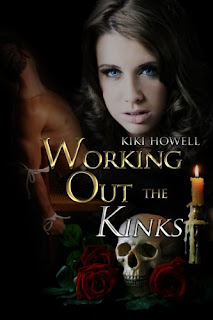 Former lovers Meredith and David have been torn apart by his family and their judgements.  After realizing how much he's lost when Meredith left, David is back and trying to make amends in this short story that doesn't scrimp on the heat.

Adding to an already intriguing premise is Meredith's being a practicing Wiccan.  With David's political aspirations, it is this fact that ends their relationship.  To get her back he's immersed himself in the world of magick, buying books and studying spells all to prove that he accepts her wholeheartedly.  Aspects of certain rituals show up during their lovemaking and add to the intensity of the moment and show proof of their newfound connection.

As I said, this is an intriguing storyline that caught my attention from the start.  The Wiccan aspects felt a bit overdone to me though and David's wholehearted acceptance felt a bit unbelievable.  I know he's doing it to prove a point to her, but he seemed to throw away a lifetime of beliefs in favor of the Wiccan religion rather quickly after it being such an issue between them.  I also didn't feel fully invested in their relationship.  They definitely have a strong sexual connection, but I don't feel there's a deep romance between them and I think my feelings mostly come from the fact that the foundation of their relationship is unseen.

These small issues didn't affect my overall enjoyment of the story though.  The storyline's creative and the sexual interludes are imaginative.  All-in-all, reading this short story was an entertaining way to spend the afternoon and I recommend it to others looking for a little afternoon delight.

My rating for this is a B

*I received this from the author in exchange for my honest opinion.