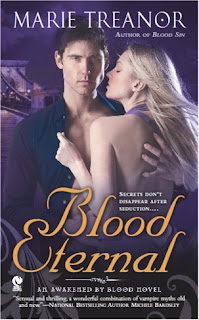 Despite the growing passion that unites them, all is not well between Elizabeth and Saloman. She refuses to follow him as he builds his influence among the human population and consolidates his rule over the vampire world. A shocking revolt is just the latest crisis that's call him away.

But under Saloman's regime, vampires have become less concerned with secrecy. And after he joins forces with vampire hunters, Elizabeth begins to understand the inevitable collision of the two worlds. She could be a conduit between humanity and the undead-is she can manage to play both sides and stay alive....
*************************
This is another intriguing installment in the Awakened by Blood series and with it being the final release there's a lot going on to reach the conclusion.  The storyline is full of political issues amongst the vampires, a new and very dangerous vampire being unleashed, and the recurring battle between hunters and vampires.  As if all these battles weren't enough, there's the continuing relationship between Elizabeth Silk and her vampire lover Salomon which is still going through some rough times.

With so much going on and with the evolving romance, this is a series that should definitely be read in order.  This isn't a stand-alone book, at least in my opinion.  Things that happened in previous books have an influence on what happens in this one and this previous knowledge will make for a better reading experience.  There were times I felt a bit overwhelmed by the different storylines and felt that there was a rush to reach the end.  The author was very ambitious in what she had planned and the overwhelming storyline reflected that.
The relationship between Elizabeth and Salomon is still going through some hard times.  Elizabeth very much loves Salomon and feels guilty for being with a vampire against the hunter's beliefs.  Salomon has always been a bit distant but does show more emotion for her in this book.  There were times I got exasperated by Salomon's outdated words and actions in relation to his feelings for Elizabeth but there's still something about him that draws you to him.  I could understand Elizabeth's attraction even while pulling my hair out over his antiquated attitude.
Between the action and romance I found this to be a satisfying story and an entertaining series as a whole.  It's said to be the last, but I see a few things that could easily be expanded upon to allow a return to this world.  With its unique characters and intriguing vampire politics this is a story that those who enjoy the paranormal will be drawn to.
My rating for this is a B.
*I received a copy of this book from the author in exchange for my honest opinion.
at October 19, 2011