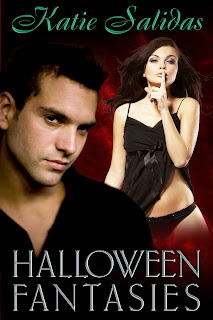 Touted as the sexiest party of the year, the annual Halloween Fantasy Ball is the one place a girl can let loose and succumb to her wildest fantasies.

Disguised as a sexy vampire huntress, Sasha captures the attention of Dante, a real life creature of the night. For Sasha, meeting bona fide vampire is enough to fulfill one of her life long fantasies. She’s ready to go home a happy woman.

But Dante has other plans. It is after all, a night of fantasies, and he has a few of his own to share.


**************************
Katie Salidas has written a short story long on sexy vampires and steamy interludes.  Sasha is the lucky girl fascinated by vampires who gets her chance to be up close and personal with one for an unforgettable night.  She's an average girl who's very likable and is someone you'd hang out with in real life.  Her interactions with her friend are full of realistic girl-talk and immerse you in the party atmosphere surrounding them.
Dante is one sexy vampire and it's easy to see why Sasha falls for him so quickly.  He's not exactly suave though.  He's relied on his vampiric abilities for so long that he finds acting charming difficult.  I enjoyed his attempts at being charming which endeared him to me.  He's not the only vampire at the party though, he has a twin brother Trevor who doesn't have to work at being charming...he just is.  Talk about double the pleasure!
Which leads me to the sexual interludes between Sasha and Dante.  They are hot together, with great chemistry.  When Trevor comes on the scene, things get even hotter.  This is erotica with a capital E!
This story was over before I knew it and I was sad when the final page was turned.  I enjoyed these characters and would love to see more of them...particularly Trevor.  Katie has written an enjoyably hot story with likable characters, so while the kids are off trick-or-treating give yourself a treat and read this steamy story full of vampy goodness.
My rating for this is an A.
*This book was given to me by the author in exchange for my honest opinion.
at October 29, 2011