No Guts, No Glory With Chuck:The Complete Fourth Season On DVD

With the new season of Chuck getting ready to return to the airwaves, now's the time for fans to rewatch last season so they're ready for the final season of this fun spy series.  New viewers can also get in on what they've been missing by watching Season 4 before Chuck's final episodes air.  Chuck is a unique show with spies willing to do what needs to be done no matter the cost.

In the fourth season finale for example, Sarah has been shot by the “Norseman” device and only has twelve hours left to live. Chuck turns his back on the CIA and despite all warnings sprints throughout the episode to find the antidote to save his fiance Sarah.  I can understand why he did what he did.  Despite knowing better, I'm the kind of person who will help anyone who asks.  It's too ingrained in me by my parents to help others.  Most times things work out fine and I feel good about helping, but other times I end up feeling taken advantage of.  It won't change my first instinct to help when asked though.

Have you ever been in a situation that despite all odds and warnings you decided to make a run for it?  How did it end up working out? 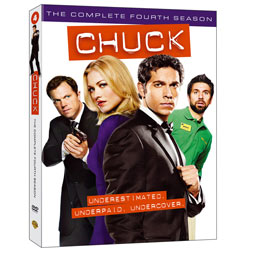 *I have been hired by Warner Bros. WBWord division to promote Chuck: The Complete Fourth Season on DVD.
at October 14, 2011