Review for Sapphire by Jeffe Kennedy 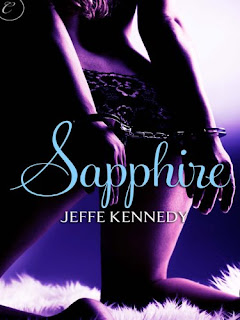 A successful executive, M. Taylor Hamilton is on track with her ten-year plan. Too bad her personal life consists of hitting the gym and grocery shopping. Enter the seductive Adam Kirliss. They may have a working relationship, but everything changes at an office party when he handcuffs her to the rail of a yacht.

Taylor writes off the adventure as too much champagne, but when Adam challenges her to a date, she agrees to meet up with him. And follow his rules. They share a night of exquisite intimacy, brimming with both pain and pleasure. But afterward, fearful of losing her heart, Taylor pulls back emotionally.

Adam is determined to prove that she longs for the loss of control he can give her—and the passionate release it provides. How can he make her see that he wants her, and not just her body?

The character of Taylor sees emotion as a weakness.  A tough childhood has led to her putting up barriers to protect her heart.  This has led to two different sides to herself...M and Taylor.  M is from her childhood and stands for her feminine side of Molly.  It's this side that Adam is trying to reach.  It did become a bit odd for Adam to keep swapping her names but the reason behind it made sense even though it was distracting at times.

This book is long on intensity but is a bit short on character development.  I would've liked to have had more background on the characters and interactions with others to better understand who they were.  I enjoyed the intensity of the sexual interludes though and that kept me intrigued until the end.  Even though this book didn't fully work for me on every level, I still found this an intriguing read and want to read more from this author.

My rating for this is a C+
*This book was given to me by the author in exchange for my honest opinion.
at November 03, 2011