Book Tour for Four of Hearts by Roz Lee 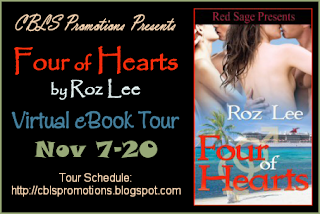 There's a sexy new installment to the Lothario series featuring a ship full of more eroticism than The Love Boat.  Courtesy of CBLS Promotions, I bring you author Roz Lee in an interview with me discussing lots of things including her new book Four of Hearts....

TSP:  First off, thanks for being here and taking time out of your busy schedule to chat with me.
RL:  Thanks for inviting me over to chat! I brought the tea and cookies, so pour yourself a cup and have a seat! I tend to be long-winded sometimes, so stop me if I get carried away. <grin>

TSP:  How did you get where you are today with your writing career?  And if things hadn't gone so well, what other career would you have chosen?

RL:  Well, golly, gee. How did I get here? Hard work. Lots of hours typing away, telling story after story and taking classes to improve my craft. I know everyone thinks they could write a book, and they probably could, but the trick is to write a good book. LOL I have to admit, my first book stunk, but I finished it. That was the first hurdle, getting to ‘The End.” Once I knew I could finish a book, I began to concentrate on finishing a well crafted book. I’m still learning, as is every other author I know.So, what would I be doing if I wasn’t writing? I’d be a burlesque dancer. No, not really! I had you going there for a second though, didn’t I? *wink*
I honestly don’t know. I do know I wouldn’t be sitting around waiting for life to happen to me. I’m sure I would find something else to do, like nose around in my daughters lives, or something worthwhile like that.

TSP:  What can you tell us about your newest release, Four of Hearts?

RL:  I knew I would write this book, the fourth in my Lothario series, before I finished the first book, The Lust Boat. I didn’t know who the couples would be until I finished the second book, Show Me the Ropes. Then it all came together. The story I wanted to tell would require some special characters, and who better than two couples my readers already knew and loved? Then it was a matter of timing. I didn’t want my characters to jump into a new relationship too soon, and I didn’t think my readers would believe it if they did, so I decided to let them simmer while I wrote the third book, Love Me Twice.Four of Hearts is not your usual romance. I’ve broken some of the unwritten rules of romance, like beginning the story with two very happily married couples, and throwing them into a situation they hadn’t anticipated. Their love is tested and stretched to the breaking point, but the bonds of their friendship and marriage vows are strong enough to survive.
TSP:  Is the Lothario Series (of which this book is a part of) going to continue from here, and if so, where do you see it going?

RL:  There are plenty more stories to be told aboard the Lothario. Book five, Under the Covers is on my editor’s desk as we speak, and I have a pretty good idea for the sixth book. I’ve even toyed with the idea of another series based on the island resort Richard and Ryan are building on one of their private islands. I’ve done some research into a theme for the resort, and hope to write the first book in that series in the near future.

TSP:  Do you have to write any differently when writing a menage story?

RL:  Yes, I do. It’s difficult to tell a story involving three or four people from just one or two points of view. I think it’s essential for the reader to know what each character is thinking and feeling. Sometimes I can convey that through someone else’s point of view, but the best way is to get inside a character’s head and let the reader see the scene through the character’s eyes. That involves a lot of decision making on my part. I have to evaluate each scene to decide how best to show the reader what they need to understand from that scene. Sometimes that means showing it from multiple points of view, sometimes one will do.Then, of course, are all those extra body parts! Figuring out where they all are, and writing the scene so it doesn’t sound like foreign language instructions for assembling a chest of drawers is a real challenge. That’s a lot of information for a simple question. I sure hope that makes sense!

TSP:  What's coming up for you with your future releases or WIPs that you can share with us?

TSP:  How has the digital revolution affected your career and how you market yourself?

RL:  My books are eBooks only, and I love it! I truly believe eBooks are the future of the publishing industry, and I’m thrilled to be part of the new era. Marketing eBooks is as new as the books themselves, and I’m constantly trying to keep up with all the new ways to get the word out about my books. Mostly, I like venues where I can interact with readers, like this one. I like to get to know my favorite authors, and I think other people like to do that too, so I’m active on several readers’ loops and of course, Facebook. You can also find me on Twitter, but I find it awfully hard to limit myself to 140 characters at a time! I’m still trying to figure out how best to reach my readers through Goodreads and Shelfari, but be patient with me. I’ll eventually get the hang of it! I think I do pretty good for someone who’s first computer was an abacus. (An exaggeration, but not much of one!)

RL:  Number one is my family. Having lived in Southern California for many years, where anytime you leave your home, due to earthquakes and wildfires, you may find yourself with only the clothes on your back, you learn just what you can and can’t live without. So, family is at the top of my list. Everything else is just stuff and can be replaced.On a lighter note…chocolate. I’ve long had an understanding with chocolate. We get along just fine! 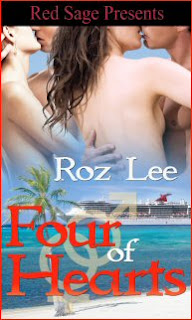 by Roz Lee
BLURB:
Marriage hasn’t tamed Candace Callahan’s sexual curiosity, something her husband Ryan is grateful for, but when she asks him to tie her up for her anniversary present, he knows he’s going to need the help of their friends, Richard Wolfe and his wife, Fallon.
Dr. Fallon Enright is the resident sex therapist aboard the Lothario - the cruise ship co-owned by her husband and Ryan Callahan. When Ryan asks to participate in one of their couple’s rope bondage classes, Richard isn’t sure it’s a good idea, but Fallon assures him all will be well.
What begins as innocent curiosity, blossoms into a polyamorous relationship none of them could have expected, but they are powerless to ignore. When the tabloids expose their new lifestyle, the foursome must choose between the love they feel for each other, or accepting society’s moral constraints.EXCERPT:

Ryan froze with his lips against the pulse in Candace’s neck. His erection surged with new vigor against her stomach. Why couldn’t his wife ask for something easy for their anniversary? Something like diamonds, a villa in France, hell, even an expedition to the North Pole. The image in his brain coalesced, and he knew he would give her whatever she wanted.
“You want me to tie you up?” he asked as soon as he found his voice.
“Don’t even try to tell me it doesn’t excite you.” Candace wiggled her soft mound against his cock. “I felt that.”
He had no intention of denying his interest. Only a fool would, and Ryan Callahan was no fool. He continued his exploration of his wife’s creamy soft skin, all the while forming and reforming the new image in his head.
His lips left her neck, slipped to her shoulder where he tasted every inch of skin, before angling lower toward the perfect swell of her breasts. His hands held hers pinned flat on either side of her head. He’d tied her hands once, when he’d spirited her away from the Lothario and onto the Vixen, but that had been role-playing more than anything else. He was pretty sure she had something more in mind. He hoped to God she did.
Her request shouldn’t have been a surprise. She’d spent a lot of time lately talking to his best friend’s wife. Rope bondage was Fallon’s new research topic, and a passion shared with her husband Richard. Ryan inched his way lower, and teased one nipple to a marble hard peak with his tongue, before taking it in his mouth. Candace drew in a sharp breath and arched her back, encouraging him to suck harder. He obliged his wife.
His wife. The moniker still sent a thrill through his body every time he thought, or said the word. Candace Callahan. His wife. God, what a wondrous thing that was. For nearly a year, she’d been his constant companion, his lover, his…everything. Before he met Candace, he’d been lost and alone, searching for something he couldn’t name. Now it had a name. Love.
“Well?” Candace prodded on a gasp as Ryan switched breasts, sucking the poor, neglected one in his mouth without preamble.
Surely, she knew the answer. He couldn’t deny her anything. Still, he made her wait for his reply. It wasn’t as if he hadn’t given it any thought himself. There wasn’t much he hadn’t imagined doing with Candace.
He released her hands and slid lower until he lay pillowed between her thighs. He brushed his thumbs over the neatly trimmed auburn triangle that drew him like a compass needle to magnetic north. The scent of her arousal filled his nostrils and fueled a primal need. He swept his tongue through her juices. She ground her swollen flesh against his face, and he knew she’d forgotten everything but this. He dedicated himself to keeping the status quo for the foreseeable future. 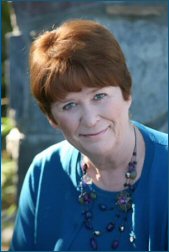 ABOUT THE AUTHOR:
Roz Lee has been married to her best friend, and high school sweetheart, for over three decades. These days she splits her time between their home in rural New Jersey, and Southern California, where her husband works. Even though she’s lived on both coasts, her heart lies in between, in Texas. A Texan by birth, she can trace her family back to the Republic of Texas. With roots that deep, she says, “You can’t ever really leave.”
Roz and her husband have two grown daughters they couldn’t be more proud of, and are currently raising an eleven-year-old Labrador Retriever, Betty Boop, who isn’t aware of her canine heritage.