There's a sexy and suspenseful new book out there and courtesy of Bewitching Book Tours and Trish McCallan I'm going to share with you all this book's greatness.  You'll also get to know how great it is yourself since I have a digital copy of this book to give away to some lucky commenter.  So read the entire post to find out how to win. 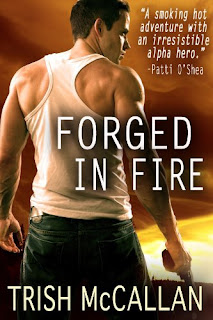 Forged in FireBy Trish McCallanGenre: paranormal romantic suspenseBeth Brown doesn’t believe in premonitions until she dreams a sexy stranger is gunned down during the brutal hijacking of a commercial airliner. When events in her dream start coming true, she heads to the flight’s departure gate. To her shock, she recognizes the man she’d watched die the night before. Lieutenant Commander Zane Winters comes from a bloodline of elite warriors with psychic abilities. When Zane and two of his platoon buddies arrive at Sea-Tac Airport, he has a vision of his teammates’ corpses. Then she arrives—a leggy blonde who sets off a different kind of alarm. As Beth teams up with Zane, they discover the hijacking is the first step in a secret cartel’s deadly global agenda and that key personnel within the FBI are compromised. To survive the forces mobilizing against them, Beth will need to open herself to a psychic connection with the sexy SEAL who claims to be her soul mate. Available at Amazon here.Available at B&N here.Available at Smashwords here.
EXCERPT: CHAPTER ONELieutenant Commander Zane Winters shifted uneasily against the grungy white wall across from gate C18’s ticket counter. He felt naked without his Glock. Exposed. An itchy, irritating prickle of vulnerability tightened his skin and cramped his muscles. Which was fucking ridiculous. They were on leave, for Christ’s sake, booked on a civilian flight. Yeah, he and Cosky and Rawls had to check their weapons with their luggage, but so what? They weren’t going wheels-up, facing deployment to some godforsaken foreign jungle or burning swath of sand.