Review for When Tony Met Adam by Suzanne Brockmann 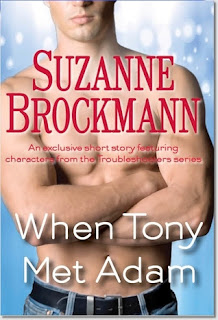 An exclusive short story featuring characters from the Troubleshooters series

Tony Vlachic, a ruggedly handsome Navy SEAL, has kept his sexuality a secret for years under the threat of “Don’t Ask, Don’t Tell.” That is, until he meets Adam Wyndham, a charismatic yet troubled film star. Tony knows that by approaching Adam in front of his teammates he’s jeopardizing his military career. And Adam, nursing a broken heart, has no interest in a relationship. Still, neither man can deny their instant attraction.

Tony didn’t become a SEAL by accepting rejection, and his pursuit of Adam leads to one unforgettable night. But the next morning, Tony is ordered to ship out to Afghanistan, and he’s forced to leave Adam with too much left unsaid. As Tony enters a dangerous war zone, Adam, back in Los Angeles, struggles with the demons of his past, while dealing with the very real possibility that Tony could be killed in action. Half a world apart, both men must face their feelings for each other—and decide if what they’ve found is worth risking everything in the name of love.

********************************
This is a short story from the world of Suzanne Brockmann's popular Troubleshooter's Incorporated series and fits in seamlessly amongst the rest of the full-length novels.  This story goes further in-depth into the life of one of the oft-mentioned Seal Team Sixteen teammates and a character who's been rather despicable until now.
Tony Vlachic has been a rather quiet character.  In this story he shows a much more outgoing side, he's charming and sexy and completely irresistible.  He takes charge and shows Adam what true love can be like.  Adam doesn't stand a chance when confronted by the tidal force that is Tony V.
Adam Wyndham has spent most of this series being a drunk, compulsive cheater, sabotaging his most recent exes love lives.  I was pleased to see a different side to him here.  He knows he has issues and wants to get past them to have the kind of loving relationship those around him have.  He showed some very deep emotions in this story and demonstrated that he has a heart and I was happy he finally found a HEA.
I also enjoyed seeing other characters from the series in this story and was particularly surprised by one character, who's notoriously judgemental, be the one to get Tony and Adam together.  I liked seeing this more mature side to Dan and it reminded me of why I like his character even when he's being a jerk.  The other teammates lived up to what I expected of them and it was like revisiting family.


This release also dealt with the recently repealed "Don't Ask, Don't Tell" policy and its affect on those soldiers who have always bravely done their duty.  The issue is handled in a dignified, straight-forward way with no melodrama.  Some of Tony's teammates talk about DADT, but it's done in a mature, non-judgemental way that felt very natural.
I enjoyed this short story immensely and felt that it flowed beautifully.  The emotions were intense with a believable sexual interlude.  At no time did I feel cheated by the shortness of the book.  The storyline felt fully fleshed out with strong character development.  I give kudos to Ms. Brockmann for a sensitively well-written story with a nice bit of romance.
My rating for this is an A+
at November 06, 2011