Review for Treasure Me by Christine Nolfi 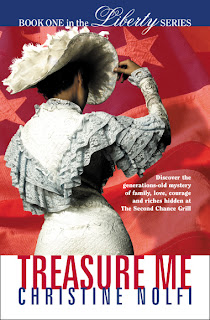 Petty thief Birdie Kaminsky has arrived in Liberty, Ohio to steal a treasure hidden since the Civil War. She’s in possession of a charming clue passed down in her family for generations: Liberty safeguards the cherished heart.

The beautiful thief wants to go straight. She secretly admires the clue’s author, freedwoman Justice Postell, who rose above the horrors of slavery to build a new life in Ohio. According to family lore, Justice left South Carolina at the dawn of the Civil War. Heavy with child, she carried untold riches on her journey north. As Birdie searches for the treasure, she begins to believe a questionable part of the story: a tale of love between Justice and Lucas Postell, the French plantation owner who was Birdie’s ancestor.

If the stories are true, Justice bore a child with Lucas. Some of those black relatives might still live in town. Birdie can’t help but wonder if she’s found one—Liberty’s feisty matriarch, Theodora Hendricks, who packs a pistol and heartwarming stories about Justice. Birdie doesn’t know that an investigative reporter who has arrived in town will trip her up—as will her conscience when she begins to wonder if it’s possible to start a new life with stolen riches. Yet with each new clue she unearths, Birdie begins to discover a family history more precious than gems, a tradition of love richer than she could imagine.


********************
I wasn't sure what to expect when I received this book for review, but what I got was a very emotional story with a well developed romantic relationship between two characters trying to find redemption.  Throw in a small town full of colorful characters and an intriguing mystery surrounding lost treasure and you have a very satisfying page turner.
Birdie is a very likable heroine who's had a difficult past.  With parents who were thieves and brought her up in that life, Birdie would finally like to stop stealing and make something of herself even though the path to going straight is a difficult one for her.  Enter the townsfolk of Liberty, Ohio who make her feel like family which she's always longed for.  Through them, she's finally given a real reason to put her past in the past.
Hugh is a good match for her with his own baggage.  He's desperate for a good story to restore his career and Birdie could be just the ticket.  But he's been betrayed by love before.  So as he and Birdie become closer he's forced into choosing between career and love and like any good hero you can assume which he picks.  Their relationship is one slow burn which I liked.  I really bought into them as a couple because of the time taken for them to get to know each other.  They brought out the best in each other and gave a reason to be better people.
The citizens of Liberty are a wonderful group of secondary characters.  Each one is unique and reminiscent of your own family members.  They gave Birdie a home and it was heartwarming seeing them care so much about her.  The mystery, with its entertaining backstory, added an extra dimension to the overall story and kept me guessing all along and waiting breathlessly for the next clue.
This was a satisfying story from beginning to end with characters that really stood out.  With just the right hint of romance and mystery this is one book I greatly recommend and a world I look forward to visiting again with a much hoped for sequel.
My rating for this is a B+
*I received this book from the author in exchange for my honest opinion.
at November 27, 2011