Readers looking for an angsty romance of young love, coming out, and issues of domestic abuse will find themselves drawn to this m/m story.  Keep reading to get a tempting taste of Holding On by Sarah Hadley Brook, along with my impressions of it, then add it to your bookshelf.  In honor of this angsty teen romance make sure to fill out the form below for the chance to win an eBook of choice from Ms. Brook’s backlist too! 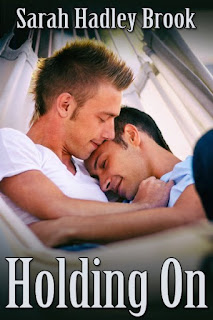 Eighteen-year-old Aaron Pickard is dealing with a lot: he’s falling for his straight best friend, his mother has ended up in the hospital after a violent assault by his father, and he’s trying to decide when to come out. Tack on the stress of an upcoming prom and graduation, a part-time job, and the possibility he could lose his best friend, and he’s an emotional wreck.
Aaron’s best friend Jeff Leaton provides a soft place for him to fall when his life is thrown into chaos, literally holding him each night as they fall asleep. As Jeff helps Aaron navigate through the mess that has become his new normal, Aaron’s feelings for Jeff intensify.
Aaron’s pretty sure it’s all going to end badly, but he’s holding on to hope.

Young love is just one of the emotionally intense topics in this angsty romance between two high school seniors whose final year sees their lives being put through the wringer.  It’s a tale full of tears, laughs, as well as charm that kept me riveted to all the highs and lows these young men go through on their journey to happily-for-now.

Aaron Pickard’s always felt a bit different from the other boys.  He never felt the same way about girls when he was young, never understood the attraction to boobs that his friends talked about.  The day he had his first kiss with a kissin’ cousin is the day he knew he was gay.  With a physically abusive father hurling slurs at him and fears about coming out, he decided to keep that realization to himself though.  He kept that realization buried deep until the day he met the gangly new boy in school, the day he realized how complicated sexuality can become as his new friend soon comes to mean so much more to him.  It’s a rocky road to romance though, a journey full of misunderstandings and melodrama that sometimes frustrated me yet kept me fully invested all the same.  For the most part Aaron’s a likable character.  He’s a bit weepy at times, quick to jump to conclusions, but with all the life-altering events befalling him he’s able to rise above it all and become stronger because of it.

Jeff Leaton vividly remembers the day he met Aaron.  They’ve been best friends ever since, something he never sees changing, even as his feelings for him are becoming romantic.  The night tragedy strikes Aaron’s family though is the moment he can no longer deny his burgeoning feelings and becomes Aaron’s support system and protector.  Jeff’s a mature character for his age, a solid support to Aaron, and is always there when he needs him most.  Aaron’s always in his thoughts and he puts him first in a romance that charmed me just as his actions endeared him to me too.

On a whole this was a satisfying m/m read with a romance that was sweet and sensual, teeming with sexual tension.  When they finally took their relationship to the next level it led to scenes full of wonderment as well as inexperience that felt realistic.  These feelings were vividly depicted and kept me fully immersed in the narrative and rooting for these two appealing young men.  Their new-found romance was nicely balanced with their unwavering friendship as they withstood intense highs and lows in a story that was a bit rough around the edges but still kept me fully invested in this drama-filled world of two high schoolers discovering just who they are.

Sarah Hadley Brook lives smack-dab in the middle of the Heartland and is the mother of two wonderful young men, as well as two cats. During the day, she works in the nonprofit world, but reserves evenings for her hobby-turned-passion of writing, letting the characters she conjures in her mind take the lead and show her where the story will go. When not working or writing, she can be found reading, working on dollhouses, trying her hand at new recipes, or watching old movies and musicals. In her ideal world, Christmas would come at least twice a year, Rock Hudson and Doris Day would have costarred in more than three movies, and chocolate would be a daily necessity. She dreams of traveling to Scotland some day and visiting the places her ancestors lived. Sarah believes in “Happily Ever After” and strives to ensure her characters find their own happiness in love and life.