Another collection of stories from the 1001 Dark Nights series hit bookshelves and it’s reason to celebrate!  It’s a heartbreaking tale of opposites attracting in this MC-fueled novella full of eroticism and suspense.  Keep reading to get a tempting taste of Ride Dirty by Laura Kaye, along with my impressions of it, then add this next installment in the Raven Riders series to your bookshelf! 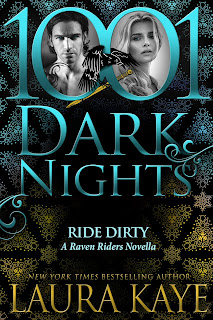 Caine McKannon is all about rules. As the Raven Riders Sergeant-at-Arms, he prizes loyalty to his brothers and protection of his club. As a man, he takes pleasure wherever he can get it but allows no one close—because distance is the only way to ensure people can’t hurt you. And he’s had enough pain for a lifetime.
But then he rescues a beautiful woman from an attack.
Kids and school are kindergarten teacher Emma Kerry’s whole life, so she’s stunned to realize she has an enemy—and even more surprised to find a protector in the intimidating man who saved her. Tall, dark, and tattooed, Caine is unlike any man Emma’s ever known, and she’s as uncertain of him as she is attracted. As the danger escalates, Caine is in her house more and more – until one night of passion lands him in her bed.
But breaking the rules comes at a price, forcing Caine to fight dirty to earn a chance at love.

With every new thing he shared, Caine felt like a thin filament stretched between them, anchoring them together. The connection between them was growing, strengthening. He could feel it like he’d never felt anything before.
He was getting attached. To that feeling. To Emma herself.
It was what he’d always wanted. It was the thing he feared the most.
But right now, he had it. He had her. And he wanted her...
“Stand up, Emma.” The questions in her gaze quickly shifted to understanding, and she rose above him. His hands went to her waistband and quickly bared her. Caine pulled her until she stood with her feet on either side of him where he sat leaning against the front of the couch. “I want my mouth on you again.”
The moan that spilled out of her at the first swipe of his tongue went right to his cock. He unzipped his jeans and shoved them down his thighs. Then he held her open with his thumbs so that her clit was right where he wanted it to be. He sucked and flicked and nipped until she was thrusting against his face. He groaned his approval. Her hips became more frantic. “Caine,” she cried hoarsely, her knees going out such that she nearly collapsed into his lap, still shaking.
He took advantage and kissed her, wanting some part of him inside of her while her orgasm wrung every second of pleasure out of her.
“Jesus, your mouth should be illegal,” she said, chuffing out a breathless laugh.
“You say the nicest things,” he said, the playful words probably masking just how much he lapped up her praise. “Will you take me in you?”
She didn’t hesitate—she shifted to her knees. They both shucked their shirts. He pulled his last condom from his wallet and rolled it on.
She impaled herself on him, inch by soul-stealing inch. “You fill me up so good,” she said.
The echo of his earlier thought stretched a new filament of connection between them. “Ride me, Emma. Show me how you like it.” 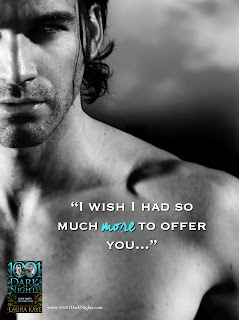 Caine McKannon has been on the periphery of this series since it started, a quiet yet commanding presence that intrigued me.  With this novella he finally takes center stage in a story that pulls at the heartstrings.  Caine’s always had difficulties getting close to others due to a horrific childhood that had him doing many unspeakable deeds in order to survive after leaving the horrors of foster care behind.  He’s full of guilt over what he’s done and for what he couldn’t stop from happening and it makes for a heartbreaking past being revealed.  His painful past not only left it’s mark mentally, but physically as well by the numerous scars and burns left on his body that had me reaching for the tissues as he revealed them to Emma.  The early parts of this story had Caine holding back, not wanting to dirty up the near-perfect Emma, but as his walls came down he became more personable.  Being with Emma unburdened him and allowed a more carefree side to emerge that endeared him to me.  His story brought tears to my eyes, but his ending had me cheering for this unforgettable read.

Emma Kerry’s the proverbial good girl.  She’s a kindergarten teacher with a sunny and caring disposition who’s just what Caine needs and deserves.  As her favorite holiday comes closer, Emma finds herself in the center of increasingly dangerous events.  The first event seemed random, but it soon becomes clear that someone’s out to hurt her.  Lucky for her, Caine’s in the right place at the right time and becomes her hero in more ways than one.  From the moment she sees him she’s intrigued and sets out to discover the man hiding under layers of guilt and pain.  Her unconditional acceptance of all that he is saves him, while his strength and protectiveness saves her when her stalker is revealed and it makes for one heckuva epic romance.  Emma’s an immensely likable heroine, open and honest.  She listens without judgment and shows him the goodness he can’t see in scenes that are sweet and sentimental.  She’s no shrinking violet and has a level head on her shoulders that has her standing up for herself when it matters most.  She’s the quintessential heroine who had me cheering for her heartfelt words and deeds as she triumphantly stood by her man.

They say that good things come in small packages and that’s very true as this novella has lots to say as it leaves a large emotional impact.  Caine’s a tragic character because of his painful past, but is a hero too for all that he overcame and for his need to protect.  Emma’s a good match because of her strong will and unwavering belief in Caine’s goodness.  They’re a dynamic duo with a sweet and sexy connection that brought a tear to my eye.  Balanced with that are scorching interludes that were bdsm-lite but still had me blushing for their intensity.  Along with this intense romance came an exciting bit of mystery as readers were left guessing about who was out to get Emma.  While the villain was obvious to me, the reveal was set up in an exhilarating way that had my pulse pounding.  On a whole this quick read added up to an unforgettable snack that I gluttoned myself on and I recommend it highly to readers looking for a tale that perfectly balances romance and danger. 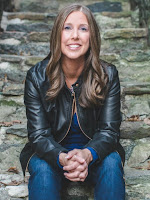