Opposites attract in this small town romance that sees past secrets coming to light along with past hurts when the town good girl falls for the town’s bad boy.  Keep reading to get a tempting taste of Hurts To Love You by Alisha Rai, along with my impressions of it.  In honor of this third installment in the Forbidden Hearts series make sure to fill out the form below for the chance to win a print copy of the first book in this series too! 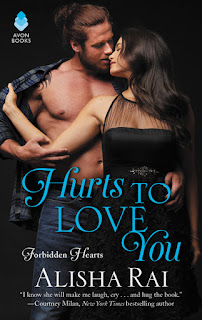 Being bad never felt so good, in the third novel in Alisha Rai’s sexy Forbidden Hearts series!
Well-behaved women don’t lust after men who love to misbehave.
Heiress Evangeline Chandler knows how to keep a secret . . . like her life-long crush on the tattooed hottie who just happens to be her big brother’s friend. She’s a Chandler, after all, and Chandlers don’t hook up with the help. Then again, they also don’t disobey their fathers and quit their respectable jobs, so good-girl rules may no longer apply.
Gabriel Hunter hides the pain of his past behind a smile, but he can’t hide his sudden attraction to his friend’s sheltered little sister. Eve is far too sweet to accept anything less than forever and there’s no chance of a future between the son of a housekeeper and the town’s resident princess.
When a wedding party forces Eve and Gabe into tight quarters, keeping their hands off each other will be as hard as keeping their clothes on. The need that draws them together is stronger than the forces that should shove them apart . . . but their sparks may not survive the explosion when long-buried secrets are finally unearthed.

“No one knows.”
His tone was bleak, the words tripping over each other.
“No one will,” she whispered, though that wasn’t her place to promise. “I’ll keep it a secret.” His laugh was a harsh bark. “What am I supposed to do? Just trust you?”
“Yes.” The adrenaline in her blood spiked, and she leaned in closer, driven to comfort and consume him. “I’m very good at secrets.”
He shook his head. “You don’t—“
She had no idea what he was going to say, because she settled her lips over his. It was a ridiculous urge, born of panic and desperation and a deep-seated drive to calm him. Their lips fit together perfectly, and she moved them over his, tasting the faint hint of mint in his mouth.
Finally. Finally. Now she knew what kissing would feel like.
Like perfection.
He froze for a second, but then a growl came from deep in his chest. He tightened his hold on her, crushed her close, and kissed her back. 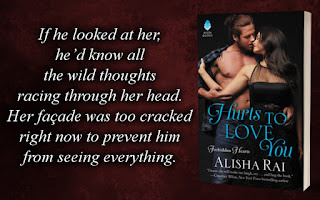 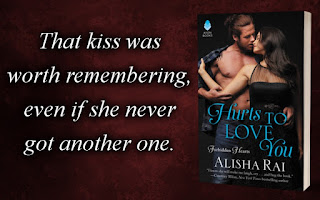 The family drama permeating the Forbidden Nights series comes to an end as family and friends come together at a wedding that has secrets from the past being revealed along with long-hidden feelings.  For a young woman trying to break free of her oppressive upbringing, to the older man dealing with his own secretive past, it’s an especially emotional time that takes readers on a rollercoaster ride.

Eve Chandler grew up with wealth, but behind the pristine facade was a young girl emotionally abused by a father who taught her that appearances are everything and that everything has a monetary value.  It made for a childhood full of self-doubts, loneliness, and a closing off of her emotions that affects her still today.  Courtesy of an overprotective brother she’s still struggling to break out of the shell her father encased her in and as the story progressed we saw a woman gaining strength and becoming more self-assured.  With her empowerment came an increasing sensuality to her feelings for Gabe.  What started out as a girlish crush grew to womanly needs that she was finally willing to go after wholeheartedly.  Eve was immensely likable and her evolution through this story was a highlight.  The actions of her father were truly reprehensible and seeing her finally overcome his abuse had me cheering. She’s a sweet heroine, caring, and not at all the proverbial rich bitch as she valued that small circle of people who she felt safe letting in and did all she could to make them happy.  She’s a memorable heroine who’s finally living life to the fullest which made her hard-fought HEA all the richer.

Gabe Hunter was always the boy looking in from the outside as the son of the housekeeper who got to ride the coattails of his mother’s rich employers. Despite hobnobbing with the rich he still knows his place in the world and is still resentful of it.  Carrying the life-altering secret that he does, along with the soul-crushing death of his best friend, has also made him closed off and leery of making connections for fear that the truth will come out.  Spending time with rich girl Eve is creating all sorts of chaos in his head, making him drink more and be more careless, but the attraction is starting to wear him down.  Being in close quarters, and with her growing inner strength, it’s a battle to keep her at arm’s length that he’s failing at.  Lots of push and pull on his part leads to lots of frustration for readers, as does the secret he carries which never felt that monumental to me.  When everything is finally revealed, pieces must be picked back up and feelings must be embraced in order to reach the somewhat rushed but satisfying conclusion.  Gabe’s a sexy and artistic player who’s hiding behind his own facade.  Wanting something and getting it are two very different things and Gabe’s constant pushing away of happiness frustrated me.  The emotional tug of war between him and Eve drives this story though and throughout their journey Eve grew while Gabe stagnated.  While I liked him, I never felt like I knew him completely.  He never fully opened up and because of that his HEA with Eve was slightly dimmed though still satisfying for all the empowerment it brought her.

Not having read the previous books in this series did make all the familial connections confusing, made it a bit harder to immerse myself in this final story. Despite that there was the bright spot of Eve who grew emotionally by leaps and bounds throughout this book.  She started off timid and full of self-doubts, scared to grab on to life for fear of being judged.  With each turn of the page though she practically jumped off the page in her drive to start living and her actions had me cheering.  Gabe wasn’t quite as endearing but his interactions with Eve did bring a smile to my face as she grew to give as good as she got around him.  Their connection also made for a sensual romance that was slowly built up to.  Surrounding this relatable main couple was a large cast of secondary characters whose stories were told earlier but are updated here.  For myself, who hasn’t read their HEAs, the glimpses of them here have me longing to go back to see where all the family drama began.  Readers who enjoy small town romances with a bit of familial secrets will find this a compelling series-ender that will have you reaching for the book that started it all while buckling up for the rocky ride ahead.

Alisha Rai pens award-winning sexy contemporary romances and is the first author to have an indie-published book appear on The Washington Post's annual Best Books list. She spends most of her time dreaming up sexy heroes and heroines, traveling, and tweeting.