Book Review for Take Me Down by Tara Wyatt & Harper St. George 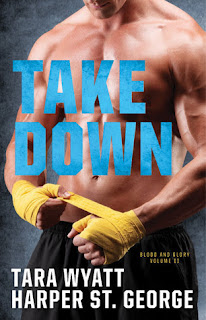 The second novel in the sizzling Bloody and Glory series—perfect for fans of Katy Evans’s REAL series and Sidney Halston’s Worth the Fight series—reveals that fighting for your heart is sometimes the only way to beat the demons in your soul.
MMA champion Gabriel “The Sandman” Maddox prefers to live his life quietly and intensely. He plays by the rules, respects the sport, and trains harder than any other fighter. It’s this unwavering focus that helps him block out the pain from a devastating loss in his past. He spends his days slaying his monsters in the octagon, and his evenings numbing himself with sexual conquests. With his painful baggage, he’s not looking for anything beyond his no-strings-attached lifestyle.
But journalist Megan Sinclair won’t leave him alone. She’s intensely drawn to Gabe from the moment she meets him, and wants to know more about the secretive man who both intrigues her and makes her heart race. As she gets to know the quiet, brooding fighter, she realizes that giving in to their intense chemistry could mend her scars. Will these two be able to heal each other, or will ghosts from the past keep them apart?

After the compelling glimpses readers got of Gabe “The Sandman” Maddox in the first installment in the Blood and Glory series, he’s back in all his quiet and commanding glory in a gut-wrenching tale that brought a few tears to my eyes.  He’s not the only one dealing with a painful past though as a female reporter, and friend of the heroine from the previous book, is still trying to overcome the scars her fight against cancer left her with both inside and out.  Together they’ll find a bit of healing, along with lots of scorching encounters, in a journey to HEA that pulled at my heartstrings before reaching its surprising conclusion.

Gabe Maddox is the elder statesman of the MMA, secure in his place in the League and making a comfortable living.  He doesn’t want to make any waves as his career is coming to an end, but personal and professional entanglements soon have him waging a battle more important than his upcoming match in the ring against Leandro Oliveira.  He’s always been focused in and out of the ring, regimented in how he lives and trains, like a man possessed.  The moment he meets Megan though his stoic veneer starts to crack.  The demons of his past, the ones he thought he put into submission, soon come boiling to the surface as she starts making him feel things he’s not felt for a very long time.  In a relationship that started out as no-strings, it’s not long before their relationship becomes more personal and has him making some life-altering decisions.  Gabe’s a delicious hero, sexy and controlling when we first see him.  It’s clear though that he’s hiding things, hurting from a past that he refuses to talk about, which leaves readers wanting to know more.  His past is a heartbreaking one of loss and guilt that he’s still punishing himself for by denying himself the happiness that Megan brings into his life.  Though his pushing her away is frustrating it’s understandable and his love and loyalty to his loved ones endeared him to me all the more.  It had me wanting to hug him as well as hit him over the unnecessary guilt he’s been carrying and rooting for him to finally forgive himself.

Megan Sinclair’s life is finally starting to get back to normal after a romantic break-up and a battle against cancer.  It’s a battle that’s left her bruised, both inside and out, as her body carries scars while her sex drive and self-esteem are at an all-time low.  The moment she meets Gabe though every part of her seems to roar back to life and when he offers her a no-strings affair she jumps at the chance to start living again.  As their casual relationship turns more personal, and as Megan pushes Gabe for more, readers will find themselves caught up in all the emotional highs and lows as Gabe fights his past for a future with her.  Megan is a strong-willed heroine, kindhearted and a good support to those she calls friend, a woman who’s overcome a painful past and still sees the good in life.  She’s also very inquisitive and doesn’t back down easily which makes her relationship with Gabe all the more compelling as he’s thoroughly tempting and full of secrets.  Her cancer battle had me admiring her all the more too as it’s dealt with head-on throughout this story and depicts both the physical and mental aspects of all she’s overcome.  While it brought her low it never broke her completely and it ultimately gave her the strength to settle for nothing less than Gabe’s love.  Being with Gabe was a healing balm to them both in a relationship that was scorching yet sweet and heartbreaking at times.

This story pulled me in from the very start with its appealing main couple and cast of equally entertaining secondary characters.  Megan and Gabe’s connection is combustible from the moment they locked eyes and from there their interactions were teeming with sexual tension.  Their relationship may have started out as them just scratching an itch but it wasn’t long before their hearts and minds became involved.  Their interactions started out erotically-charged with a bit of BDSM involved but they slowly became a bit sweeter and more heartwarming and showed Gabe in a more personable light.  Fighting is all he cared about at the start but by the end he made the grandest gesture of all to show Megan how much he came to care for her.  It was an act that was bold and left me cheering both him and the authors for doing the unexpected.  The world of MMA was again vividly depicted, both in and out of the ring, and highlighted a group of sexy and colorful fighters I’m longing to learn more about.  Bad boy Oliveira is next up to take center stage and with the compelling groundwork laid here his story promises to be one of decadent delights.  On a whole this was yet another stellar story in a series that I hope to see more of as there’s plenty of fodder for the future.  The authors gave us lots of heart and soul with Megan and Gabe’s HEA, as well as lots of sweaty interludes, in a tale that had me cheering and shedding a few tears along the way. 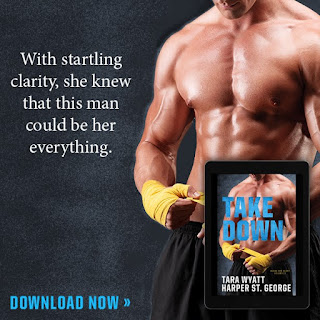 *I got this book for free from the XOXO After Dark website for review in exchange for my honest opinion.
at March 04, 2018