Readers take one last ride with the Satan’s Knights in this tale of young love, second chances, and revenge that kept me on the edge of my seat from the first page to the last.  Keep reading to get a tempting taste of Loner by Janine Infante Bosco, along with my impressions of it, then learn even more about this book by visiting the other sites hosting this tour.  In honor of this fourth installment in the Nomad series make sure to fill out the form below for the chance to win a signed print copy of this book, a signed poster, and an Amazon GC too! 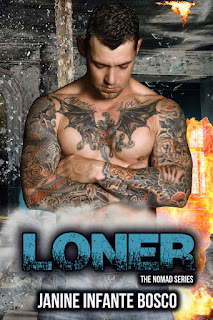 Linc
A man who can’t visualize his future will always revert to his past.
To where he came from and all the ways he failed.
The murder and mayhem that changed his life and darkened his soul.
The legacy of who he is will burn through his veins and ominously guide him to hell.
A place where he pays not only for his sins but the sins of his father as well.
A hustler by nature, a loner by choice, I am the spawn of Satan.
I am Lincoln Brandt and I am the son of Cain.
Kelly
Reckless and rebellious, I’ve spent most of my life running away from one mistake only to chase another.
At the end of my rope with nowhere left to turn, I’m about to make the biggest one of all.
Face to face with the bastard who broke me, I lay it all on the line for him.
My heart and my life.
Heaven is overrated and the ride to Hell doesn’t have to be lonely.
The stakes are high.
The risk great.
It’s do or die.
Together we’ll ride.
Forever we’ll burn. 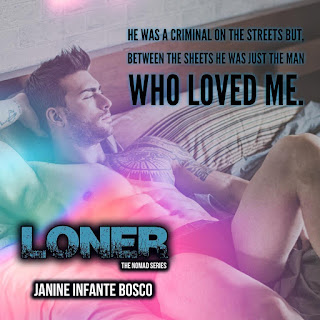 When it comes to MC-fueled romances nobody does it better than Ms. Bosco with her depiction of the Satan’s Knights!  It’s an intense world she’s crafted based on love and loyalty that keeps you on the edge of your seat as characters, who’ve come to feel like family, struggle to get their HEAs.  With this final installment in the Nomad series there’s a sense of finality but there’s also a subtle promise of more to come as one or two strings were left hanging.

Lincoln Brandt’s childhood was one of pain and loss as the unacknowledged son of MC royalty.  His legacy was one of blood, criminality, and drugs that his mother tried to keep him from but that ultimately sucked him in and took the life of the first woman he ever loved.  Guilt has been his constant companion ever since, and in an attempt to keep a new love safe, he ran away and landed in the middle of a deadly war.  Now in a wheelchair, the result of a bomb sent to their clubhouse, he’s trying to walk again while overcoming the bitterness of what’s befallen him.  A chance to get revenge on the man who’s orchestrated all of the bad things that have happened to the Satan’s Knights is the impetus to his recovery...as is the unexpected arrival of the woman whose love had him running from the HEA he so desperately wanted with her.  Linc’s life has been a constant battle, a war within himself over his guilt and his belief that he’ll bring nothing but pain to those he cares for.  A battle too from those who know his true identity and want him to pay for his birth father’s crimes.  The battles have left him bitter and alone, with his only moments of true happiness courtesy of his first young love and the more mature and meaningful love of Kelly.  Linc’s a compelling hero who’s made many mistakes, spilled lots of blood, but I’m still drawn to him and rooting for the one woman who can ease his pain.  His disability is vividly depicted, the physical and emotional pain of it pulls you in and makes his frustrations relatable.  There’s not a quick fix to his recovery, and even by the end he’s still struggling, which I applaud Ms. Bosco for as it made for more realistic storytelling.  On a whole Lincoln’s a hero who’s rough around the edges but whose heart shines bright as fate finally had him grabbing on to Kelly with both hands as he and his Brothers rode to her rescue.

Kelly Scotto’s life is one teeming with loneliness and her desperate desire for attention.  From an early age it’s clear that her mother is incapable of love and that the only person who cares about her is her Uncle Wolf, a member of the Satan’s Knights.  It’s not long though before her friendship with a younger Linc turns to romance as they’re both lonely souls who find solace and support in each other’s arms.  Putting her heart on the line left her bitter and lost once again when he left amidst heartbreaking words and it still has her angry when she sees him recovering at Wolf’s house.  She’s leery of opening her heart again but Linc’s too much of a temptation.  Using every arsenal in his sensual playbook brings feelings from the past back and has her longing to get the HEA they once planned for in a sweet and sexy reunion.  Kelly’s a strong-willed woman, bold with her words and deeds, and she’s a formidable match for Lincoln.  As a young girl she starved for attention and went out of her way to get it.  It made for fiery teen years and it’s now left her a woman who won’t back down.  She’s fearless about everything except when it comes to matters of the heart which at first has her hesitant to take a chance on Lincoln, but with their lives on the line she embraces what he’s offering wholeheartedly in a triumph of the heart.

This was an intense story from the very first page to the last as readers get taken on an unforgettable roller coaster ride.  Told in dual POVs, and showing us where this dynamic duo came from to where they are now, it made for a compelling read that fully invested me in their heartbreaking lives.  It’s a more personal story this time around with most of the action taking place in the very last chapters.  Before that it’s a story full of heart and soul, full of tragedy and joy, and it required a few tissues to get through.  It’s ultimately a story about family though and it’s one last stand for the Satan’s Knights against a villain who’s orchestrated many vile acts throughout the series.  Their final confrontation with Yankovich was a mostly satisfying one, but in some ways it wasn’t near enough for all the heinous acts he’s committed.  By the turn of the final page I was left cheering for the sexy and supportive men of the Satan’s Knights yet ready for more from the talented Ms. Bosco.

PREVIOUS BOOKS IN THE NOMAD SERIES... 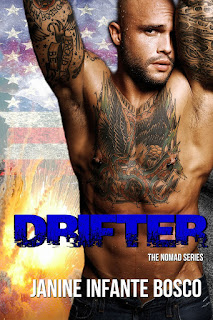 DRIFTER (Book #1)
"Stryker”
I’m a drifter.
A man born to ride through this world alone.
There used to be a time when I thought I was the rescuing type. I enlisted in the Marines and made it my duty—I was going to save lives.
I was going to be a true American hero.
But God had another plan.
Or maybe Satan did.
For everything I touch finds mortality.
I’m no hero.
I’m nothing.
I’m a veteran biker, a former nomad who survived war only to live in hell.
Now I ride with the Satan’s Knights of Brooklyn and I’m drifting into a different kind of chaos.
The kind that revolves around a pretty girl with intoxicating green eyes.
A girl who has the power to turn me inside out.
A girl who doesn’t need anyone to rescue her because she’s her own savior.
Until she’s not.
But a man plagued by war and the devil inside him can never be her hero.
Gina Spinelli
Strong. Independent. Fierce.
They are the three things I strived to be.
But sometimes being successful can be lonely.
Sometimes a girl just wants to be a girl and have someone take care of her.
Maybe even love her.
Sometimes the strong become vulnerable.
Or worse, the victor becomes the victim.
Sometimes we lose control or in my case it’s stripped from you.
Defeated. Broken. Haunted.
They are the three things I have become.
In my darkest hour I admit defeat.
In my darkest hour I need one person.
I need him.
Stryker. 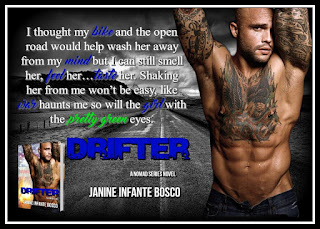 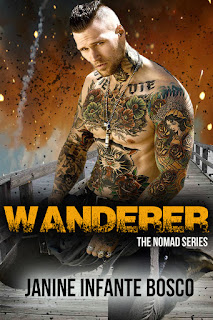 WANDERER (Book #2)
Cobra
I’ve lived two lives.
One full of innocence and one full of sin.
I mourned the perfect life I was born into and made it my duty to chase the phantom who stole it from me.
Revenge, mayhem and loss are all I know.
I am the lone man—I am the wanderer.
The former nomad—now, Satan’s deadliest soldier.
The two worlds were never supposed to collide. Innocence and sin aren’t made to coexist yet somehow my past bleeds into the present and I find myself facing my biggest regret…I find myself face to face with her—the girl who got away.
The girl I let go.
The woman I’ll ruin if I stay.
Celeste
Our young love was marred by violence.
Our guilt destroyed us, fate tempted us but, it was he who broke us.
They say time heals all, but all time did was dull the ache of his abandonment.
Now, dressed in leather, covered in ink the boy I mourned is now a man—a man tormented by his demons.
In another life we were everything to one another.
In this life we’re strangers. 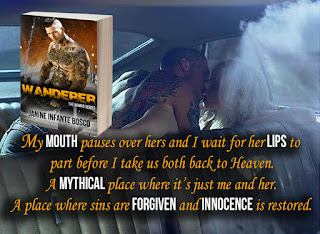 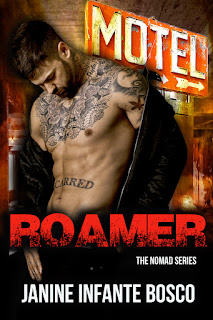 ROAMER (Book #3)
Deuce:
The first moment I stared into Ally’s tortured blue eyes, my subconscious knew I’d never escape her. She called to the darkest part of my soul and made it impossible to ignore the strange pull I felt towards her.
Some things are just meant to be.
As long as we were both breathing, my heart would do time with hers. Like the famous outlaw lovers, Bonnie and Clyde, Ally and I committed the perfect crime. I claimed her heart, and she stole mine.
I only meant to save her.
To heal her.
Now, my past threatens to ruin her.
Wanted dead or alive, I’ve got her by my side and together we’ll ride.
Ally:
I thought the world forgot me.
That I had died at fourteen.
But, I never knew life until I knew him.
Rescued and healed, I found love in the face of an outlaw.
Whether he fails or flies, I’ll ride until I die.
I’m his Bonnie and he’s my Clyde.
A love as strong as ours will never die. 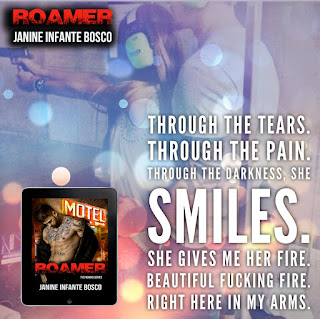