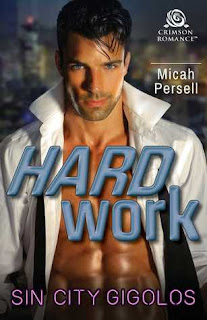 Meet the gigolos of Sin City: three fun-loving studs who are deadly serious about pleasuring their clients and protecting their hearts.
Victoria Hastings is poised at the edge of the promotion that will change her life and put her at the top at Precision Media Services. All she needs is to snag one more premier advertising client, and her successful future is in the bag. The only person who stands in her way is Georgiana Masterson, the top agent at an opposing firm.
Kipling “My Last Name Is the Only Thing Not for Sale” loves his job as a gigolo, but he also understands that this good run on fortune can’t last forever. He’s raising serious cash to start his own business—he’s not sure exactly what that will be, but it won’t conform with the Madison Avenue-style track his parents would appreciate.
When a business deal between them turns to more pleasure than either could have imagined, Victoria and Kip find themselves caught between living for now and positioning for the future—a future one of them will have to sacrifice to give love a chance.

Readers will find themselves charmed by this sexy older woman/younger man romance full of heart and soul.  From its immensely appealing hero who wears his heart on his sleeve to a heroine who’s not perfect, this story kept me turning the pages in breathless anticipation.  By the time I reached The End I couldn’t wipe the smile off my face and was ready to start it all over again.

Victoria Hastings is a woman devoted to work.  After the death of her husband, and the traumatic events surrounding the last few months of their marriage, she’s weighed down by guilt and leery of becoming involved with anyone.  The loneliness has been eating at her though, needs she’s had since being married, that she no longer can ignore.  Seeing a sexy guy across a bar has her emboldened but discovering he’s a gigolo ends things before they start...until her caring and outspoken sister-in-law intervenes to hire him for a night with Victoria.  It’s an eye-opening night for both of them and she’s not near ready for things to end as it was a night of freedom for her, a night to be with someone strong who met all of her desires.  Not wanting to jeopardize the morality clause of a much sought-after business contract though has them agreeing to only 18 days of decadent delights which slowly takes a more romantic turn.  Through their time together Victoria comes to count on Kip’s support, his pride in her work, and before long they start looking more like a couple as hearts and minds intertwined with scorching interludes.  A misunderstanding on Victoria’s part though had her saying hurtful words that made me want to slug her, but when it mattered most she proved herself worthy of Kip’s love and support.  Victoria’s a bit uptight when we first meet her, seemingly content being celibate but her loneliness soon becomes apparent.  Her guilt over her husband’s death was understandable at first, but her long-term celibacy is pure self-punishment and I was happy to see her sister-in-law pushing her to get over it.  Kip being younger was also an issue for her at first but thankfully wasn’t something she dwelled on as so many other romances do.  On a whole Victoria was a strong-willed woman, who didn’t always think before she spoke, but who finally realized what was truly important in life.  Afraid to start over, to live instead of existing, she finally grabbed on to the love and support Kip was offering in a HEA that was well worth the emotional ups and downs it took to get there.

Kip Masterson’s a lost soul at the start of this story, a lost soul who hides his unhappiness behind a suave and sensual persona.  He has an unhappy home life courtesy of a bitter and domineering mother who cares only about appearances.  She uses her wealth to belittle her husband and it clouds Kip’s views on love and marriage.  Becoming a gigolo was partly an act of rebellion, but it also represents freedom from his mother’s domination.  He seems to enjoy his career choice but aspires to be more as he has plans to start a business of his own.  He’s become complacent though and fears taking that final step to starting a business.  The moment he meets Victoria is when everything changes.  He’s drawn to her and throughout their relationship the playboy facade fades away and readers discover a sweet and caring young man who can see a future with her in it.  Their time together was a chance for him to find himself as Victoria had complete faith in his ability and intelligence.  While his mother constantly tore him down, Victoria built him up.  Kip became the quintessential book boyfriend for me as his feelings for her had him wearing his heart on his sleeve.  He did many sweet and subtle deeds that charmed me and endeared him to me wholeheartedly.  His sweetness is balanced with his inherent sensuality that made for numerous scorching encounters between him and Victoria that took on a more emotional turn as the story progressed.  From the first page to the last I was fully invested in Kip and was rooting for his HEA every step of the way.

This was a delightful romance that put a modern twist on the Pretty Woman theme.  Kip’s a young man enjoying the carefree life of a gigolo who finds himself unexpectedly drawn to the older woman who helps him find himself while helping her move on from her painful past.  They find emotional support in each other and become a dynamic duo for their combustible connection that scorched up the pages.  While Kip was near-perfect in his words and deeds it was Victoria who frustrated me at times.  She lashed out a time or two in anger and it was hurtful to Kip, who was nothing but wonderful to her.  While she did make amends it still marred my overall view of her to where I think Kip should’ve made her grovel more for his forgiveness.  The stars of this story are clearly Kip and Victoria, with their flirty banter and crackling connection, and the ups and downs they experienced kept me captivated.  Alongside this appealing couple is the bold and colorful Cassidy who pushes Victoria to make amends and re-enter the land of the living.  As Victoria’s sister-in-law she was there for the heartache and has her own that she’s dealing with and that colors her own views of romance.  That doesn’t stop her from playing cheerleader in her attempts to get Kip and Victoria together and I’d love to see more of this exuberant character.  Readers looking for a bit of afternoon delight will get all that and more in this sexy and charming series starter that will leave you with a smile on your face!

*I got this book from Xpresso Book Tours for review in exchange for my honest opinion.
at March 21, 2018