The theme of friends-to-lovers is a favorite of mine and is the driving force in this sweet and sexy tale of friends fighting the truth and their pasts.  Keep reading to get a tempting taste of Scoring Off the Field by Naima Simone, along with my impressions of this romance set in the sports world, and discover even more about it by visiting the other sites hosting this tour.  In honor of this second installment in the WAGS series make sure to fill out the form below for the chance to win a print copy of this book and a $10 Amazon GC too! 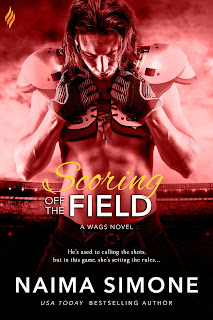 Tennyson Clark is getting a life. First step: quitting her job as assistant to Dominic Anderson, star quarterback for the Washington Warriors, her best friend … and the man she’s been secretly in love with for years. But since the gorgeous, if overprotective playboy has only ever seen her as his BFF, she’s finally ready to relinquish her tattered fantasy and move on. Enter steps two and three: new job and new man.
Football is Dominic's life, and with his contract soon up for renewal, all his focus needs to be on the game. But Tennyson—dependable, logical Tennyson— is making that next to impossible with her mysterious new job and her sudden interest in online dating. He doesn’t do relationships. But the thought of another man touching her sexier-than-hell curves has him suddenly wanting more from his best friend.
Indulging in hot, dirty, what’s-my-name sex with no strings and lots of benefits is simple, uncomplicated…until it’s not.

“What the hell are you talking about now?” Dom barked. “Paying for your college tuition, getting you a job and apartment—I did all that because we’re family, not to control or manage you.”
“We are not family,” Tennyson replied, voice sharp. And those four words jabbed him in the chest, expelling all the air from his lungs. “I’m not the broken little girl from the foster home who you took under your wing anymore. No matter how much you still think I am.”
“Goddamn it,” he growled, getting up in her space. Anger shoved at him, ate at him. The hell he wanted her to be that eleven year-old with the wounded eyes and heart. It’d been his life’s mission to make her forget what betrayal, pain, and hunger felt like. And here she stood, accusing him of… “If you think I want that for you, then you don’t know me at all, Tennyson.”
“No, you don’t want me to be her, but you see me as that girl. You’re still trying to be my hero, my protector, my big brother. I don’t need to be protected, and I damn sure don’t want you as my brother. My life has revolved around yours for the last fourteen years. I’m tired of it,” she stormed. “You don’t respect me as an adult capable of making her own decisions—“
“Could you please stop for a minute?”
She complied, blinking up at him, probably shocked at his asking her to be quiet or the “please”—maybe both.
Anger licked at him, burning him in its flames. Anger, frustration…hurt. They all propelled him forward. Before he could question himself—reason with himself—he was moving, pinning her to the wall, thrusting his fingers through her thick, nearly black curls. Pressing his chest to hers, grinding his cock into the soft give of her stomach. She didn’t utter a word, just stared up at him, shock darkening her eyes, parting her lush lips.
“We’re not family? You don’t want me to protect you?” He hurled her words back at her, tightening his grip on her hair, pulling her head back just a little farther. Her lashes fluttered, and her breath caught, the soft gasp of air brushing his mouth. Oh hell. She liked that. Eyes narrowing on the flush that lightly colored her cheekbones, he tugged on her hair again, a little firmer than the last time. Once more, she gave another of those almost imperceptible pants, a small, hungrysound accompanying it. Her fingers curled into his shirt, her nails barely scraping his chest through the material. But he felt the light scratch all the way in his dick as if she’d drawn them down his already throbbing erection.
Fuck.
“Dom,” she whispered, her lashes lifting. Confusion shadowed her eyes. But so did arousal. And it was the heat there that had him pressing closer until she raised on her toes, another of those whimpers escaping her. Hell, he could make dragging that sound from her another career.
What are you doing? the rational side of his brain scolded. But he barely paid it any heed. The primal side of his psyche had taken hold. And screw it, he let it take over.
“Let me show you what I do to women who aren’t family,” he rasped. 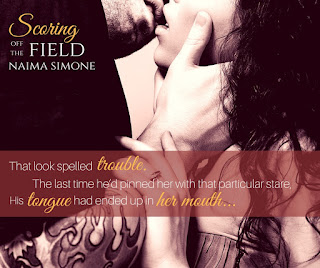 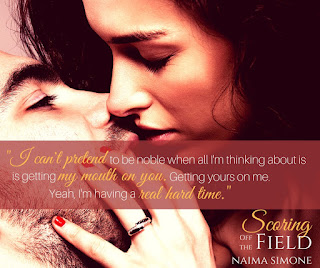 From the moment I started reading this book there was a sense of familiarity to the storyline, a sense of getting exactly what I wanted and needed.  Though things went as I expected, with no surprising twists and turns, it still made for a very satisfying read.  It was a heartwarming read, sweet and sexy, that despite not breaking any new ground kept me fully immersed in its charming narrative.

As youngsters, Tennyson Clark and Dominic Anderson met in the world of foster care, both dealing with loss and clinging to each other for support.  While Dom went on to get adopted by his football coach he never forgot about Tenny as she became the driving force in his journey to football success.  He took care of her financially, protected her from emotional hurts, and gave her a job as his PA. He entwined her completely into his life and can’t imagine her not being there. That’s why her decision to get a new job, applying out of state too, throws him for a loop.  They’ve always been close, he knows her just as well as he knows himself and he feels betrayed by her decision.  With their time together coming to an end he starts seeing her in a whole new light though that has their friendship turning romantic.  Always the playboy, he thought he could keep their relationship carefree but he quickly starts falling for his friend.  But as his feelings become more romantic, his fear over losing someone else he loves has him making his own frustrating decision that changes both of their lives irrevocably.  From the moment I first saw Dom I was enamored.  Yes, he’s popular with the ladies but he always made his intentions clear.  His first love is football and he’ll never do anything to jeopardize his standing as a disastrous relationship early in his career taught him.  He and Tenny are delightful together, sweet and snarky and able to sense what the other thinks and feels without a word...at least until feelings of love enter the picture.  When it does he discovers he’s been completely oblivious to Tenny’s long-simmering love.  As the story progressed Dom showed his deepening feelings through numerous subtle words and deeds, with feelings of jealousy arising too.  By the end he achieved book boyfriend status with a glorious Grand Gesture that warmed my heart and proved his love for Tenny without a doubt.

Tennyson had a tough childhood as the daughter of a woman with a mental disorder who purposely sickened her child for attention.  It left her fearful of hospitals as well as feeling unloved.  The one person to truly care for her after entering the system was Dom and she came to count on him.  He was always there for her, keeping her safe and loved, and he became her family.  He also became the standard by which she judged all other men.  After a drunken confession to him about her feelings though, and after the awkward ending to two of their friends becoming short-term lovers, she was firmly placed in the friend-zone.  Realizing that life is passing her by means getting out from under the heartbreaking protection of Dom to make a life of her own.  But before she leaves she gets a taste of all she ever dreamed of in a sweet and sexy friends-with-benefits relationship that becomes more emotionally intense.  Tenny’s a likable heroine, one who’s strong-willed yet naive when it comes to men.  For too long she kept her heart hidden, but she’s not willing to do so any longer and it shows her in a more mature light as she stands up for what she wants. For him, she was willing to battle old demons and it had me cheering.

From the first page to the last this was a charming read with bits of humor and a few scorching encounters along the way to HEA.  Tenny’s a heroine who’s easy to relate to with a fun and flirty connection to Dom.  Dom’s a very sexy and romantic hero in his own subtle ways that had me drooling over him.  As friends they were funny and supportive, but as a couple they crackled.  Surrounding this combustible couple were an entertaining cast of secondary characters who felt more like family.  I enjoyed Dom and his teammates, Zeph and Ronin, with interactions full of support as well as brotherly banter.  These glimpses have me excited for the future, a future of many more combustible romances set in the football world! 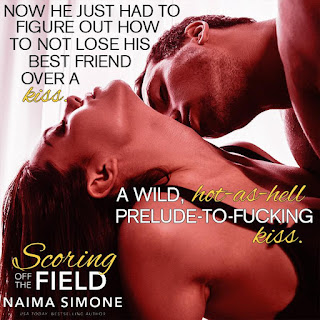 PREVIOUS BOOK IN THE WAGS SERIES: 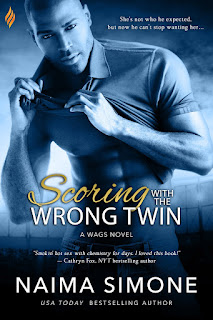 SCORING WITH THE WRONG TWIN (WAGS #1)
Shy, awkward Sophia Cruz has a hard time telling her vivacious identical twin “no.” But when her sister begs her to swap places for a modeling shoot, she caves… again. Then Zephirin Black walks onto the set. The brooding, aloof, and gorgeous tight end for the Washington Warriors. But she can keep it professional… She has to. Because the adorkable Cruz twin has no luck with guys once they compare her to her sister.
After a bad break-up, Zeph hasn’t been big on second chances — and even less with trust. But he finds himself giving please-call-me-by-my-middle-name-Sophia both. The woman he’d dismissed as a spoiled cover model is different from the first time he met her. Quirkier. Funnier. Definitely sexier. What started as one night turns into another... and another… and another....
Still, Sophia can’t go on keeping her secret from him. But telling Zeph the truth will mean losing him for good. 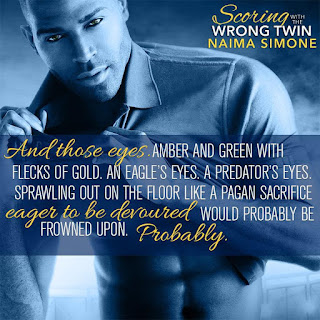 USA Today Bestselling author Naima Simone’s love of romance was first stirred by Johanna Lindsey, Sandra Brown and Linda Howard many years ago. Well not that many. She is only eighteen…ish. Though her first attempt at a romance novel starring Ralph Tresvant from New Edition never saw the light of day, her love of romance, reading and writing has endured. Published since 2009, she spends her days—and nights— writing sizzling romances with a touch of humor and snark.
She is wife to Superman, or his non-Kryptonian, less bullet proof equivalent, and mother to the most awesome kids ever. They all live in perfect, sometimes domestically-challenged bliss in the southern United States.