Fans of rockstar romances will find themselves drawn to this emotionally Intense tale that pulls at the heartstrings as you end up on a roller coaster ride from the first page to the last.  Keep reading to get a tempting glimpse of the gritty Limelight by Alyson Santos, along with my impressions of it, then add this fourth installment in the NSB series to your bookshelf! 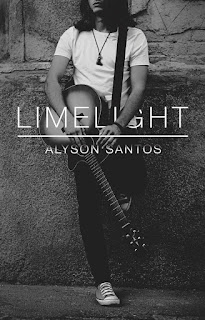 I’m unpredictable.
A genius, an underachiever.
I’m the song, the voice, the passion, the pain.
I am failure.
I do music because it’s what I am, but sometimes that’s not enough.
A slave to my nature, I wait for it to show mercy and drop a gift in my lap.
Because the music chose me.
I’m its victim not its gift.
She destroyed my career.
Ruined my life.
Pushed me from the shadows and exposed my lies.
She’s the fire that destroys lesser men, and now her flames are aimed at me.
She loves to watch me burn, but the part we never saw coming?
Sometimes it takes a fire to ignite a spark
And slay the darkness. 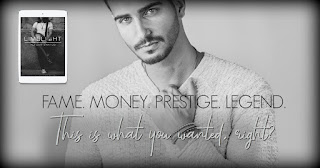 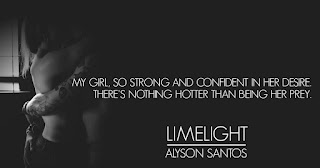 From its opening sentence readers will see that this isn’t your typical rock star romance.  While there’s bits of glitz and glamour, there’s vastly more pain and anger that make this a difficult read at times.  It’s a heartbreaking read that puts readers through the wringer right alongside its main character in a tale of redemption that’s oh so satisfying.  It’s a tale that will leave you in tears while ultimately having you rejoice for all that the hero overcame...just make sure to have plenty of tissues nearby.

Jesse Everett’s star was on the rise, alongside his brother and their band Limelight, until his demons took over and he crashed and burned.  This story details his journey towards redemption and it’s a rocky one where he falters repeatedly but somehow picks himself back up with the support of a loving brother and an unexpected ally.  Jesse’s childhood was one of unspeakable torture, both physically and emotionally, and it’s left its mark both inside and out.  The physical scars are disturbing but it’s the mental ones that fully immersed me in this story and had me aching for him as he often lost himself in the memories.  The images and feelings of worthlessness were palpable and it’s understandable why he’d want to hide from those feelings as they were truly toxic.  Though he and Mila Taylor started out as enemies she quickly becomes his champion.  She’s sees the real man behind the troubled rocker and loves him despite his imperfections.  She gives him the strength to start living instead of just existing in an emotionally draining journey back to the top.

The men of Limelight are a colorful group, exuberant with talent to burn. Jesse’s brother, Parker, is the brains of the group and the one driving them forward after their fall.  His childhood was tragic too but his demons aren’t near as noticeable.  He loves and supports his brother but enables him too by not demanding he seek help.  Derrick and Reece are the fun-loving members of the group and their joy is infectious in every scene they’re in and I look forward to seeing more of them.  Mila’s a strong-willed woman who bursts on the scene in a memorable way and never hesitates in telling it like it is.  She saw something in Jesse that attracted her and though they started out as enemies they slowly became a dynamic duo through flirty banter and heartfelt talks.  Jesse’s clearly the heart and soul of this story and it’s his pain that drives the narrative.  His addictions and depression are vividly depicted as his pain became ours.  Nothing was sugarcoated in a journey that pulled Jesse under while building him back up in a recovery that was never easy.  And just when you think all is well in the world, Ms. Santos pulls the rug out from under you in a truly devastating act that had me applauding her courage while leaving me shell-shocked.  From start to finish readers will find this an epic and powerful story of redemption, one that pulls you in wholeheartedly, and one that has me counting down the days until we can revisit these bandmates that feel more like family.

I’m a writer, musician, and cat lover. I also have an alternative music obsession. Seriously, it’s a real problem.
I write what needs to come out, whether it’s pain, tears, or laughter. I write people and relationships, about the beauty and horror of what we do to ourselves and each other. I write Love. Vengeance. Compassion. Cruelty. Trust. Betrayal. Forgiveness. Darkness, and the incredible way humans destroy and heal each other.
I like to eradicate barriers, refusing to be confined by the laws of physics or limitations of reality. I will befriend a vast population of possibilities and introduce them in ways that might surprise you.