A hedonistic rock star finds himself drawn to the inexperienced sister of a fellow rocker in this  sensual and angsty tale.  Keep reading to get a tempting taste of Forbidden Song by Brooklyn Ann, along with my impressions of it.  You’ll also hear from Ms. Ann talking about why readers like rock star romances then learn even more about this book by visiting the other sites hosting this tour.  In honor of this fifth installment in the Hearts of Metal series make sure to fill out the form below for the chance to win a $15 Boroughs Bucks GC too!

I know a ton of readers love the “bad-boy” image that comes with the territory. Rock is definitely more rebellious than pop or country, especially heavy metal. Some, like me, probably love long-haired men too.
Another aspect of the appeal is that rock stars are artists. Who doesn’t love a creative hero? Especially with a medium that carries so much emotion, as music does.
Some readers also enjoy reading about a rich and famous hero living a glamorous life, but I kind of subvert that trope because unless they’re super-famous and established, most heavy metal artists aren’t that rich. I mean, they’re not poor either, but you can forget about penthouse suites and limo rides. Savvy artists know those perks come out of their royalties, so they will sleep on the tour bus with the crew more often than not, or double up in a hotel room. Megadeth did this even when their album Countdown to Extinction went platinum.
Aside from a preference for realism, I also enjoy writing about situations that aren’t often encountered in other rock star romances.
A big reason that I was drawn to writing rock star romance is that the music industry would be, and is, a difficult world in which to find love, with the constant travels from gig to gig, and the overzealous groupies. Of course, my romantic imagination spun a tale.
And that’s how my Hearts of Metal series was born. My heroines tackle the challenges of a male-dominated world and find love and respect as a result. Some of them are metal musicians themselves, others are women who have a deep passion for the music.
In Forbidden Song, the heroine, Christine Mayne, is the younger sister of a famous rock star. Her brother has tried to keep her shielded from the music industry to protect her, which only makes her more determined to observe and become part of his world. Naturally, she falls for one of her brother’s colleagues, the exact type of rock star she was taught to stay away from.
I hope readers enjoy her tale. 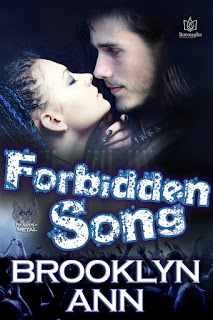 After having one of the worst experiences a young teenager could endure at the hands of cruel musicians, Christine Mayne's rock star brother Quinn tried to lock her away from the world. She had to fight to live her life, go to college, get her master's and enter her PhD program. Now, she's determined to complete her research on group dynamics by touring with Bleeding Vengeance, even it means deceiving her brother and lying to the band's fabulous lead singer, Cliff Tracey.
Cliff Tracey hates being manipulated, lied to and deceived. He'd know, having gone through a string of exes who had done just that. When he thinks he's found a kindred spirit, and a beautiful babe to boot, imagine his surprise - and disappointment - when he learns she played him so she can tour with his band to complete her PhD. When he finds out why, he knows he's in double trouble because Quinn Mayne will kill anyone who touches his sister, and Cliff Tracey has all sorts of plans for Christine Mayne that involves more than either of them ever expected.

Weaving his way through the backstage crowd, pausing to sign autographs along the way, he embarked on his search for the raven-haired beauty.
Luck shone upon him. There she was, off in a corner by the stage left exit. Alone.
She looked up at him and smiled with an intriguing combination of shyness and curiosity. Oh, man. Those green eyes.
He gathered his formidable charm and grinned as he approached. “Hey, are you the new girl Kat and Kin hired?”
She nodded with a slight frown and extended her hand. Fuck. He remembered Kat telling him to quit calling women girls.
“I’m Christine.”
“Cliff Tracey.” He gave her a long, slow smile, and was gratified to see her blush. Good, now he was back on the right track.
His fingers curled around hers. Damn, her skin was soft. No calluses, so she likely wasn’t a musician.
A light laugh tumbled from her lips. “I know. I really enjoyed your performance tonight. Your voice is incredible, and that solo during ‘Sorrow’s Harvest’ gave me chills. In fact, I’d wanted to talk to you.”
“Oh?” He kept his tone light and teasing to hide his excitement. She’d admired his performance. That was usually the first thing chicks said before the flirting began. Maybe he’d mistaken what he’d thought was lack of interest earlier. “About my solo?”
“No, though I’ll admit your talent does blow my mind.” She took a deep breath as if gathering her composure for some big announcement. “Aside from writing for Metalness, I’m working on my doctorate in occupational psychology and could use your help for my dissertation.”
Cliff blinked. “Oh. Uh…I only got as far as my associate’s, so I don’t know how much good I’d be. What’s the topic of your paper?”
“I’m studying the effects of group dynamics within metal bands under high stress conditions.” Her clinical tone was comical even as it was disappointing, what with her seeming lack of response to him.
“You want to study me?” he joked. In return, he could study her.
“The whole band, really,” she replied. “But I figured, since you’re the lead singer, I’d have to ask you. You see, my goal is to be able to travel on the road with a band and document my observations. I was hoping I could tag along, not only for the rest of this Metalfeed tour, but also your regular tour that starts next week.”
Cliff puffed up, happy that for once someone had acknowledged him as the leader of the band instead of Klement. Then: “Did you talk to Kat about it?” Since Christine worked for Kat, maybe the guitarist had suggested it.
Christine nodded. “She said she’d love to have me, but that she doesn’t have the seniority in the band to make that kind of call.”
Well, I’d love to have you, Cliff wanted to say, but he didn’t want to overplay his hand. “Let me think about it….” 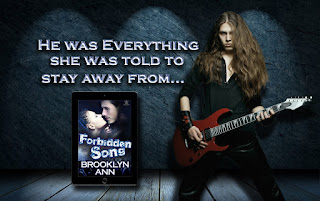 Readers will find themselves part of the band in this sweet and sensual roller coaster ride full of angst and self-realizations as past events fuel the unexpected connection between two very different people.  Though this is the fifth installment in the Hearts of Metal series it stands nicely on its own, reuniting readers with bandmates that feel more like family, while showing us a more vulnerable side to the cocky womanizer Cliff Tracey.

Christine Mayne’s still struggling to get control of her life after a sexual assault in her teens at the hands of another rock band that her brother Quinn still carries immense guilt over.  In his need to keep her safe he’s smothering her as he controls every aspect of her life, both financially and physically.  Tired of feeling like a prisoner she lies her way onto the Bleeding Vengeance tour to work on her PhD, but soon finds herself falling for Cliff and finally getting to experience life in many sweet and erotic encounters.  Christine’s a likable heroine who’s been through a lot in life.  Though it’s admirable that her brother wants to protect her he’s far too overbearing.  He’s controlled so many aspects of her life that she’s left uncertain and teeming with immaturity that was sometimes frustrating and sometimes endearing.  My biggest issue with her related to all the lies she told.  Considering how little control she had in her life I know she felt she had no choice, but standing her ground and speaking her mind in a more thoughtful way would’ve proved her maturity much sooner.  I did enjoy her relationship with Cliff though as it was a carefree connection, not weighed down by her past, that was full of joy and self-empowerment.  Sweet and erotically-charged encounters showed Christine and Cliff to be a dynamic duo that were better people together than apart.

Cliff Tracey’s always seen women as a benefit to being a rock star, a momentary appetizer to be quickly forgotten.  As the son of a rock star he was taught that lesson from an early age, but seeing all his friends start to find their HEAs has him feeling lost and alone.  He sees everyone leaving him for others, and while he wants someone to call his own, he’s scared to put his heart on the line.  The moment he sees Christine he wants to call her his own, even though he knows their relationship will cause problems.  Being with her brings him a sense of happiness and peace, makes him a better man that has him thinking of the future, until all her lies and Quinn’s anger pulls them apart.  Through all their ups and downs Cliff is a delicious hero.  Early on he appears as the quintessential rock god, but being around Christine shows a more personable and thoughtful man.  He’s sexy but also sweet in his gentle wooing of Christine. I felt sympathetic towards him throughout the story and his feelings of loneliness and fear over the changes in his band constantly had me wanting to hug him.  Though he was understandably hurt by Christine’s actions he’s quick to admit his feelings and makes a heartwarming grand gesture to win her back that brought a smile to my face.

The romance between Christine and Cliff is a satisfying one and their hard-fought HEA was a cheer-worthy one.  Readers repeatedly get pulled into the rock star world through the vividly depicted concert scenes that dripped of sweat and sensuality as well as the decadence of the backstage and endlessness boredom of touring.  We get reunited with past couples while getting more insight into future pairings as Ms. Ann beautifully juggles three different rock bands throughout the narrative.  While all these rock stars have become like family there’s a few who stood out...for better and worse.  Quinn’s a caring and loving brother but his actions were over the top and frustrating.  He nicely redeemed himself at the end though and it will remind readers of why they fell for him to begin with.  British drummer Rod fully tempted me here as he too has been feeling left out and unsure of his place.  By the end of the story though I have great hope for his future and am waiting with breathless anticipation for his story to be told.  Fans of rock star romances will want to immerse themselves in the sexy and emotionally intense world these bands inhabit and now is the perfect time to start!

Formerly an auto-mechanic, Brooklyn Ann thrives on writing Romance featuring unconventional heroines and heroes who adore them. After writing historical paranormal romances and urban fantasies, she now explores the chaotic realm of heavy metal music— a difficult world to find love in.
Brooklyn Ann lives in Coeur d’Alene, Idaho with her son, her cat, and a 1980 Datsun 210.