Book Blitz for All Knighter by Em Petrova (GIVEAWAY)

A man notorious for his playboy ways finds himself unable to forget the one woman to have him for more than one night in a scorching romance of secrets and suspense.  Keep reading to get a tempting taste of All Knighter by Em Petrova, then add it to your bookshelf.  In honor of this first installment in the Knight Ops series make sure to fill out the form below for the chance to win a $25 Amazon GC too! 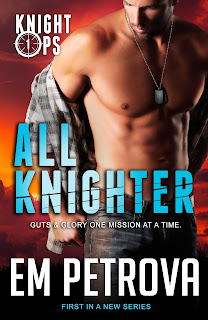 Ben Knight has held a lot of titles—devoted son, big brother to six siblings, captain of the Marine’s Fleet Anti-Terrorism Security Team and his best-known gig of Louisiana playboy. But the ladies are just going to have to understand that his time’s stretched thin when he takes on the leadership of a new special ops force.
With his brothers as sidekicks.
Worst idea ever. But a decision Ben has no control over, and control is his middle name. Actually, it’s Bartholomew but thank God nobody knows that, except one pretty little brown-eyed Cajun girl with access to too much information about the Knight family and an oh-so-sweet sassy mouth. A mouth that he’s never forgotten even though it’s been three months since he’s last had her in his bed, against a wall and over a barstool.
Dahlia was a victim of the notorious Ben Knight’s love-’em-and-leave-’em lifestyle, and it ticks her off that she can’t forget him. Maybe it’s that bad-boy smile or the way he looks like sin poured into low-slung jeans. When he comes sniffing around again, her libido makes her jump into action—and straight into a world of secrets surrounding Ben. Leading her to question whether her heart can withstand a life with a man who might not be alive tomorrow. 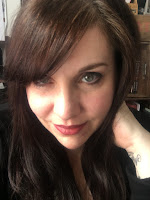 Em Petrova was raised by hippies in the wilds of Pennsylvania but told her parents at the age of four she wanted to be a gypsy when she grew up. She has a soft spot for babies, puppies and 90s Grunge music and believes in Bigfoot and aliens. She started writing at the age of twelve and prides herself on making her characters larger than life and her sex scenes hotter than hot.
She burst into the world of publishing in 2010 after having five beautiful bambinos and figuring they were old enough to get their own snacks while she pounds away at the keys . In her not-so-spare time, she is fur-mommy to a Labradoodle named Daisy Hasselhoff and works as editor with USA Today and New York Times bestselling authors.