Enemies become lovers in this Regency romance between a combustible couple who couldn’t be more opposite.  Keep reading to get a tempting taste of A Match Made in Bed by Cathy Maxwell, then add this crackling historical tale to your bookshelf.  In honor of this second installment in the Spinster Heiresses series make sure to visit the link below for US readers to have the chance to win two print copies of the first book in this series too! 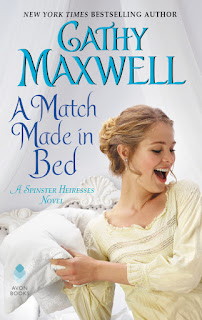 Once upon a time there were three young ladies who, despite their fortunes, had been on the marriage mart a bit too long. They were known as “the Spinster Heiresses”...
Miss Cassandra Holwell is too tall, too bookish, and too smart—but she does have money and a father who wants a grand title for her. Cassandra hasn’t felt a desire to marry until she meets the sinfully handsome Duke of Camberly, who captures her imagination . . . until Soren York, Earl of Dewsberry and her family’s sworn enemy, steps in the way.
The Holwells ruined Soren’s family, and he’s lived on the knife’s edge trying to resurrect their fortunes . . . until he considers marrying the Holwell Heiress. Not only would her dowry give him the funds he needs, he has secretly had an eye on the independent-minded bluestocking since they both first realized the differences between men and women.
She likes to read; he has no patience for books. She knows little of sex; he is a man of the world and willing to school her. Her family destroyed his; his offer of marriage may be her only salvation.
Now Cassandra and Soren must learn to love each other for who they are, not what they are—and the lessons are becoming an exercise in absolute pleasure.
EXCERPT:

He’s here. I know he is,” Cassandra whispered in the ear of her friend Willa, lest she be overheard by either Lady Bainhurst sitting on the settee with them or the very handsome, highly desirable Duke of Camberly. He stood by Lady Bainhurst but Cassandra felt he gave her and Willa most of his attention.
“Who? Dewsberry?” Willa managed around the smile spread across her face for the duke’s benefit. She was far more interested in him than Cassandra’s sudden premonition that Soren York was close at hand.
Willa was as petite as Cassandra was tall and perfectly formed in every way. Her hair was raven black, and the two were dear friends—well, except when it came to their competition to earn the attention of the Duke of Camberly.
They’d even made a flirting game of it, attaching points for different actions of courtship—a point for an introduction, three points for each dance, five points if he called upon them. When a woman had been on the Marriage Mart as long as they had, she needed a bit of competition to sharpen her skills...not that either of them required the edge of a game when it came to Camberly.
He was young and amazingly handsome. He had broad shoulders, a lean jaw, and dark hair that emphasized the jewel blue of his eyes. What woman wouldn’t want to become his duchess?
Cassandra was actually ahead in the game by one point. She’d been wondering how many points being invited to this weekend would earn her when Willa had made her appearance in the reception room. They had not known the other was coming.
And now here was Camberly, ignoring his other guests and spending his time focusing on both of them.
Everyone knew he needed to marry money. She and Willa were the only two marriageable women invited to the dowager’s house party as far as Cassandra could see. Did this mean the duke intended to decide between the two of them? Perhaps even this very week?
The thought made her giddy. She wanted Camberly. He was “the one.” The very embodiment of all her romantic dreams. No other could match him. And she was not going to let Soren York ruin this country party and her one chance for marital happiness with his presence.
Willa proved what a good friend she was by momentarily turning her attention from hanging on to the duke’s every word to murmur, “I don’t see Dewsberry.”
“He’s here,” Cassandra insisted. She sat up straighter so that she could unobtrusively gain a better look around the room.
There had been someone lurking in the hall leading to the dining room. That was when she’d first experienced the suspicion that things weren’t completely right. However, she’d been so distracted with Willa’s presence and what it meant to her chances with the duke, she’d not been interested in concentrating on her inner sense.
Then again, the duke had come from that direction, making an appearance that had surprised everyone in the room by his lack of  fanfare. Still . . . Soren was here.
The tingling of the hairs at the nape of her neck had never failed her, especially since she’d been exercising it more than she wished for the past month. Soren seemed to be everywhere she went in spite of her best efforts to avoid him because she knew what he wanted—marriage.
Dewsberry might be an old and respected title but the earldom was done up. Ruined by generations of poor decisions and unwise gambling. Soren was hunting her because of the money she would inherit upon marriage and because her father’s lands abutted his. He was that obvious. However, she thought herself safe here. Why would Camberly, who also needed a rich wife, invite a competitor?
Unless the duke thought to hand off whichever heiress he didn’t want to Dewsberry?
The walls in the room seemed to close in around her.
She would not marry Dewsberry. She couldn’t. Her father would never  allow  it.  The Yorks were his enemies. They looked down on the Holwells, and neither she nor her father would subject themselves to their high-handed treatment.
But also, Soren had betrayed her. She could recall perfectly the pain of what he’d done to her. It had been close to eleven years ago, and the hurt, the disappointment was still surprisingly raw.
From the other side of the room, her father caught her eye. He was of average height, with bushy eyebrows and hair that had gone gray at a young age. Helen stood at his side as she always did. She had a short nose and a determined chin. Her hair had once been red but had faded to a dull brown. Her father had noticed Cassandra. 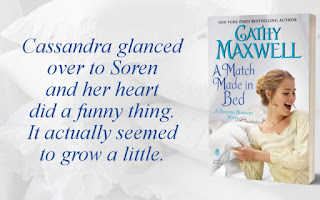 CATHY MAXWELL spends hours in front of her computer pondering the question, “Why do people fall in love?” It remains for her the great mystery of life and the secret to happiness.