Book Tour for Pretending He’s Mine by Mia Sosa (GIVEAWAY)

A fake relationship becomes all too real when a man’s attraction to his best friend’s younger sister leads to naughty thoughts when they’re thrown together after she ends up homeless.  Long-simmering feelings lead to fun and flirty actions, along with issues of self-esteem and familial disappointment, that will keep readers entertained and breathlessly  turning the pages.  Keep reading to get a tempting taste of Pretending He’s Mine by Mia Sosa then add it to your bookshelf.  In honor of this second installment in the Love on Cue series make sure to follow the link below to the entry form for US readers to have the chance to win 1 of 3 print copies of the first book in this series too! 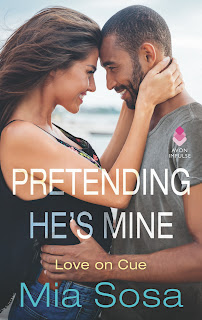 For Hollywood agent Julian Hart, representing his best friend—megastar Carter Williamson—means it’s nearly impossible to keep his personal life and career separate. To make matters worse, Carter’s younger sister has been starring in Julian’s wildest fantasies more often than he’d care to admit. He knows she’s off-limits, but when Ashley shows up on his doorstep, needing a place to crash… suddenly his greatest temptation is sleeping down the hall.
Free-spirited Ashley Williamson doesn’t do commitment. Jobs, apartments, men… why let herself be tied down? But she’s had a crush on her older brother’s best friend for years and she’s committed to making Julian want her, one towel-clad midnight encounter at a time. But just as things start heating up, their steamy flirtation is interrupted by Carter’s east coast wedding. Ashley has no desire to go home and face her reputation as the family disappointment. But living with—dare she say dating?—a successful, sexy film agent could give them something else to talk about.
Julian can’t believe he agreed to fake a relationship with the one woman he can never have. And it’s going to take more than a little willpower to remember it's all pretend. Or is it?

The next morning, my doubts return, and I chuckle at my naïveté. Because why, oh why is the simple act of making breakfast together a challenge, too?
It’s not my fault, really. Several factors are conspiring against me.
The first? Biceps porn. Holy shit, it’s a thing. When he lifts the pan from the stove, his biceps flex like thick rubber bands. If he were to hold himself above me during sex, I’d see them at close range. Up, down, swivel, and repeat.
The second factor? That apron looks fucking glorious on him. The strings are tied snugly around his trim waist, which emphasizes the nearly perfect V formed by his broad chest and shoulders. Damn, it’s hot as hell in here. I fan myself, but it doesn’t help. So when I’m sure he’s not looking, I grab the mister off the counter and spritz my face.
He catches the sound, though, and draws back. “Jesus. Did you just spray yourself with that?”
“Yeah. Why?” I pull on the collar of my T-shirt to let in some air.
He snickers, his eyes gleaming with amusement. “Ashley, that’s olive oil. You need to wipe that off.”
Great. My cheeks are on fire, and now that there’s oil on them, I just might be the first human cooking surface in existence. Swallow me whole, Mother Earth.
Shaking his head at my gaffe, he preps the waffle mix while I use a paper towel to clean myself. I should use a cleanser or something, but I don’t want to miss the biceps porn—or the apron porn for that matter. Besides, olive oil must be good for the skin.
“No blueberries, right?” he asks.
“You remember.”
“Yeah. And I remember you love strawberries, but I’m not putting them in my waffle maker. I’ll toss them on top.”
“Fine with me.”
I squeeze my fists at my sides when I discover there’s more porn. Whisk porn. He’s got a mixing bowl in one hand and a whisk in the other, and he’s beating that waffle mix like he’s its daddy.
He looks up and finds me staring at him. “Everything okay?”
I nod like a human bobblehead. “Mm-hmm.”
He transfers the mix to a measuring cup and pours the batter into the waffle maker. Then he flips it over. Oooh, it’s a double waffle maker. Fancy. Unaware that he’s the new host of my personal cooking show on the Julian Channel, he bends at the waist and wipes the metal plate with a kitchen towel, giving me a DVR-worthy view of his butt. His Nielsen ratings would go into the stratosphere every time he made that move. “Can you wash the strawberries?” he asks.
Sure, no problem. That ass is going to get someone arrested one day.
“Ash?”
Julian’s voice snatches me out of my happy place. “What?”
“The strawberries. Can you wash them?”
I shake my head and push out my lower lip. “Didn’t you hear me? I said, ‘Sure, no problem.’”
He laughs. “In your mind, maybe, but not out loud.”
“Sorry. Watching you cook requires my full attention. You’re so precise, and there are so many steps.” I retrieve the strawberries from the fridge and rinse them in the sink. How do I get these thoughts out of my head? What can I do to stop myself from wanting him? I should probably confiscate his apron. That would be a good place to start.
Beside me, Julian wipes down the counter. When he’s done, he bumps me with his hip and reaches for a clean strawberry, breaching my personal space to get to it. I try to bump him back, but he blocks me with his body, lifts the fruit over his head, and drops everything except the crown into his mouth.
The moment he bites into it, I sway on my feet. When he slides his tongue over his bottom lip to catch the juices, I swoon. Screw you, Julian. Screw you. But not really. What I really mean is, screw me, Julian. screw me. 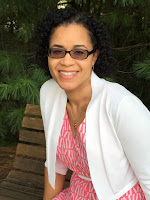 Mia Sosa was born and raised in New York City. She attended the University of Pennsylvania, where she earned her bachelor’s degree in Communications and met her own romance hero (spoiler alert: she married him). Mia once dreamed of being a professional singer, but practical considerations (read: the need to generate income) led her to take the law school admissions test instead.
A graduate of Yale Law School, Mia practiced First Amendment and media law in the nation’s capital for ten years before returning to her creative roots. Now she spends most of her days writing contemporary romances about smart women and the complicated men who love them. Mia lives in Maryland with her husband and two daughters and will forever be on the hunt for the perfect karaoke bar.
WEBSITE  |  FACEBOOK  |  TWITTER  |  GOODREADS AUTHOR PAGE  |  AMAZON AUTHOR PAGE

VISIT THE ENTRY FORM here FOR THE CHANCE TO WIN 1 OF 3 PRINT COPIES OF THE FIRST BOOK IN THE LOVE ON CUE SERIES.  US ENTRANTS ONLY!
at April 14, 2018