Book Spotlight on Play For Keeps by Maggie Wells (GIVEAWAY)

Readers will find themselves drawn to this tale set in the world of college athletics and immerses you in the emotionally chaotic love life of a man who’s unexpectedly compromised and the woman who comes riding to his rescue.  Keep reading to get a tempting taste of Play For Keeps by Maggie Wells, then start counting down the days until this book releases on April 3rd.  In honor of this second installment in the Love Games series make sure to fill out the form below for the chance to win one of five copies of the first book in this series too! 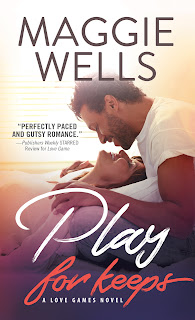 Mixing business and pleasure is a dangerous game...
Tyrell Ransom, the new men’s basketball coach, is ready to whip his team into shape and start winning some games. But when compromising photos of his soon-to-be-ex-wife with one of his players go viral, everything comes crashing down. With reporters thick on the ground, Ty and his team need some serious damage control—now.
When public relations guru Millie Jenkins arrives in her leopard-print cape to save the day, things really heat up... Soon they’re going to have to work double time to keep their white-hot chemistry out of the headlines.

Millie found Ty slumped at a bus stop outside the lawyer’s office, his head back and his eyes fixed on something in the middle distance. Not wanting to startle him, she cleared her throat, then placed her ever-present tote on the bench beside him. “Is this seat taken?”
He smiled as he lifted his head, but his eyes remained dull and lifeless. “Hey.”
She dropped down on the bench, leaving the bag as a barrier in case she was tempted to crawl into his lap and wrap herself around him, though she knew any attempt at comfort could take a turn inappropriate for public consumption if she touched his sun-warmed skin. “So, did they kick you out?”
He tipped his face up to the sun. “I heard all I needed to hear.”
“Care to share with the class?”
He didn’t look at her. “Are you sure you want to get involved?”
The petulant challenge was weak, but she didn’t hold his pique against him. She’d jerked him back and forth on the topic enough to grant him some leeway. Taking a breath, she let it out slowly, then said, “I am already.”
Her assertion captured his full attention. “What if I find out I’m the father?”
She sucked in a sharp breath. The question was blunt enough to shake the pillar of denial she’d been building her hopes on. She forced a wobbly smile. “Well, I guess my answer depends on whether you intend to get back with your baby mama.”
“No.” He answered with such quick conviction, the breath she’d been holding whooshed from her. “But I will be the baby’s father.” He paused. “I mean, if I am the father, I will be a real father to my child. I may be dealing with Mari. At least for the next twenty years or so.”
“Of course you’ll be a father to your child.” Reaching over her bulky bag, she took his hand and laced her fingers though his. “And you’ll be a great one.”
He laughed then. Husky and low. The kind of laugh so laden with disbelief, he couldn’t seem to get any air under it. He closed his eyes, but his grip on her hand tightened. When he looked at her again, his expression was pained. Millie ached to launch herself at him, public spectacles be damned. She wanted to smooth the lines away with her lips and fingers. She’d lock her lips on his and draw the bitterness out of him like snake venom. Which, in a way, it was.
“I dread telling my father. Is that pathetic?” His question pulled her out of her thoughts. He chuckled, but she heard little true happiness in the sound. “Christ, I’m forty-two years old, and I’m scared to tell my dad I might have gotten a girl in trouble.”
“A girl in trouble,” she repeated, his choice of phrasing making her smile. “Yes, you are quite the villain, aren’t you?”
“I’m serious,” he said, scowling at her.
“I know you are.”
Unable to hold back one more second, she reached for him with her free hand. He nestled his cheek into her palm. Dark, curling lashes swept down to shield his eyes, but she didn’t need to see them to know the caress helped.
“I gave up thinking about babies a long time ago. They weren’t in the stars for me. I think maybe because I knew deep down I didn’t want kids.” The confession came out of the blue, but once she started, Millie found herself hard-pressed to stem the flow. “I suppose some people would think that makes me a horrible person. An unnatural woman. But I never felt the…tug or tick or whatever women are supposed to feel. But maybe I just didn’t get that far.” She pressed her hand to her belly. “Not that I don’t like kids. I just never pictured myself having them. I always kind of thought I would make a good aunt. Like Auntie Mame.” She smiled. “I think I’d be really good at the spoiling part. Unfortunately, no siblings, so the aunt thing didn’t work out.”
He returned the smile, his eyes warming. “I bet you would be an awesome auntie.”
“Kate and Danny probably won’t have kids at this point in their lives, but Avery’s younger. She still has time.” The smile widened into a grin as she pictured all the gaudy, glitzy presents she’d heap on her friend’s imaginary children. After all, someone had to contradict the hippie-dippie granola influence in their lives. “And now, maybe you.”
His expression sobered. “Maybe me.” He raised their joined hands to his mouth and brushed feathery kisses across her knuckles. “I don’t want to lose you over this.”
“You won’t,” she whispered.
He raised his gaze to meet hers. “You mean that?”
“Yes.”

By day, Maggie Wells is buried in spreadsheets. At night she pens tales of people tangling up the sheets. The product of a charming rogue and a shameless flirt, you only have to scratch the surface of this mild-mannered married lady to find a naughty streak a mile wide. She has a passion for college football, processed cheese foods, and happy endings. Not necessarily in that order. She lives in Arkansas.