Enemies become lovers in this romance set in the rodeo world that will keep readers hanging on for dear life as opposites attract.  Keep reading to get a tempting taste of Fearless in Texas by Kari Lynn Dell, along with learning about the author’s love of rodeos, then add this new release to your bookshelf.  In honor of this fourth installment in the Texas Rodeo series make sure to fill out the form below for the chance to win 2 bundles of the books in this series too!

What I Love about Rodeo...There are so many things I love about rodeo that I could—and have—filled several books (aka the Texas Rodeo series). A million tiny details like the scent of wood shavings in a horse stall, the indescribable joy of a perfectly thrown loop, or the way a belt and buckle sets off a nice pair of hips. Lately, though, I’ve come to appreciate a facet of rodeo and life on the ranch that I’ve always taken for granted: rodeo makes women stronger.
Unlike other parts of our society, in rodeo and ranching, strength is a highly prized trait in a woman—both physical and mental. From the time we are old enough to be hoisted onto a pony totrot around the arena, we are praised for being ambitious, competitive, aggressive and independent. We are valued as much for what our bodies can accomplish as we are for our appearance. I might’ve started out by catching my husband’s eye, but I captured his heart the first time he saw me sort cows.
The smart, capable, take-no-crap women of the Texas Rodeo books are products of my environment, and none more so than Melanie Brookman of Fearless in Texas. May every reader who ventures into our world steal a page from her book and leave with a little more cowgirl in their blood—and their attitude. 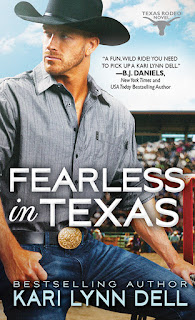 He’d step in front of a bull to save a life
But even he’s no match for a girl this Texas tough
Rodeo bullfighter Wyatt Darrington’s got it all figured out. The perfect car, the perfect job, the perfect looks—the perfect lie. He may be on the fast track to the Hall of Fame, but he knows he’ll always be an outsider to people like Melanie Brookman. Texas-born and bred, with the arena in her blood, Melanie’s come to see Wyatt as her personal enemy, and that suits him just fine—this way, she’ll never realize the truth.
He’s been crazy in love with her for years.
Melanie’s always been a fighter. Fiercely independent and tough as nails, she’s stood up to everything that got in her way—including Wyatt. But now her infamous temper’s got her on the ropes, and there’s nowhere left to run but toward the man she swore she’d never trust…and this time, there’s no denying just how hot he makes her burn.

Wyatt braced a hand on the front door of the Bull Dancer Saloon, blocking Melanie. “You can’t go back in there.”
She looked at his arm as if debating whether she should bite it or snap it in half. “You think you can stop me?”
“Yes.” He jerked a thumb toward the door and quoted the flyspecked sign posted inside. “I am the proprietor, and we reserve the right to refuse service to anyone.”
Hell. That wasn’t what he’d meant to say, but the sparks that were flying off of her were burying themselves under his skin, kindling fires that threatened to reduce all of his good intentions to ashes. Her mouth dropped open, and he braced himself for some truly spectacular swearing. Instead, she snapped it shut, whirled around, and strode away, her shiny red heels clicking angrily on the empty street.
“Melanie…wait! Could we just talk—“
Her answer was a stiff middle finger shot straight in the air. He took a couple of steps in pursuit, but his ankle made it clear that anything above a sedate stroll was a bad idea, not that he was sure what he’d do if he caught her. Attempting to stop her when she was like this would be like tackling a mountain lion, but if she intended to go to one of the other bars, she was headed the wrong direction.
“Where are you going?”
“To the bridge. It’ll have to do, since I assume you’ll follow me and there’s not a cliff handy.”
He’d already taken several more steps, but he stopped. “The rail is too high.”
“Then I’ll knock you over the head with a rock and roll you off the dike.”
She wouldn’t. Would she? “If you’re going to commit assault and attempted murder, you’ll need your keys to make your getaway.”
She stopped dead and spun around. He held up the keys in one hand and the purse in the other.
She swore and started back toward him. “Don’t think I won’t kick you square in the nuts and stomp on your fingers when you fall.”
“Not a doubt in my mind.” He unlocked the door that led up to her apartment, yanked it open, and threw both the keys and the purse to the top of the stairs before she could reach him. Then he stepped back, feet braced, ready to dodge or deflect any blow aimed at his groin. If Melanie had said it, she was seriously considering it.
She went for the door instead, but paused with her hand on the knob. “If I go in after them, you won’t let me out.”
“Nope.” Although it would take all his strength to hold the door shut if she was determined to push it open, and there was the fire escape...
Her hand dropped, and she turned on him. If it were possible for a stare to be literally cutting, his guts would’ve fallen out onto the street. “What…the hell…is your problem?”
“You.” He gestured toward her painted face, her dress, those damn red shoes. “I know what all of that means, but you’re wrong. And if you would just let me explain—“
“Yes!” She threw her hands in the air like a Baptist preacher. “Please, oh wise and knowing male, tell me how I’m supposed to feel. Better yet, explain why it is that you could leave this place with any of those women you’ve never met before and you get high fives, but if I do the same, I’m an embarrassment to your shitty little bar.”
Despite his vow to remain calm, his temper began to stir. “I did not say—“
“You don’t have to. I grew up in the goddamn Bible Belt. I’ve heard it all my life.” The bitterness in her voice ran generations deep. “Well, sorry, but not sorry. I’m done trying to please anyone but myself. I’ll sleep with who I want, when I want, and y’all can just deal with it.”
Not likely. Wyatt’s anger boiled up, shooting past the red line and straight into fury. Yes, her rage was justified, but she did not get to lump him in with bastards like Michael and her former boss. All he’d ever wanted, from damn near the first moment they’d spoken on the phone, was Melanie, but it was as if the entire universe had conspired against him, and he was so damn tired of fighting this bone-deep need...
He took a step toward her. Then another. She didn’t budge, but her eyes flicked toward the apartment door as if reconsidering her choices.
He leaned in close, his breath fanning her cheek, his voice low and lethal even to his own ears. “Is that what you want? Just someone with a pulse you can use up and toss out when you’re done?”
He heard her swallow, but she didn’t flinch. “Why shouldn’t I? Men have been doing it forever.”
“Yes, we have.”
He gathered a fistful of her hair and wound the warm silk around and around his hand until his knuckles were pressed to the nape of her neck. Her breath caught at the electric press of skin against skin, and her eyes went even darker. The line he’d held for so long had been crossed. He was beyond stopping—unless she made him.
“As long as you’re determined to do something you’ll hate yourself for in the morning, it might as well be with me.” And then he kissed her.
And instead of shoving him away, Melanie clenched both hands in his shirt and yanked him closer. 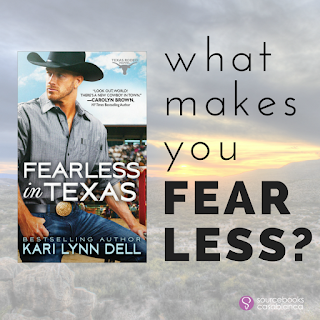