Opposites attract in this romance between an average woman and a sexy Hollywood star under the watchful eye of the paparazzi.  Keep reading to get a tempting taste of One Wild Night by A.L. Jackson and Rebecca Shea, along with my impressions of it, then add it to your bookshelf.  In honor of this first installment in the Hollywood Chronicles series make sure to fill out the form below for the chance to win a $50 Amazon GC too! 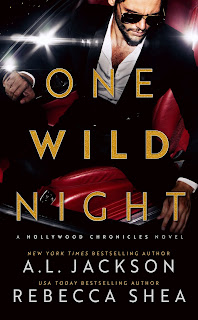 A flirty, sexy contemporary romance from bestselling authors, A.L. Jackson and Rebecca Shea...
Kaylee Rose Burton, kindergarten teacher, has never been a believer in fantasies.
Living in L.A. her entire life, she knows the glitz and glam of Hollywood is just an illusion.
That is until she stumbles head first into the arms of Hollywood’s most eligible bachelor.
It was just another day for Paxton Myles on the red carpet until the blue-eyed beauty literally stumbles at his feet.
A single glimpse in her innocent eyes and he knows he has to have her.
After one night of unbridled passion, Kaylee slips away to live her quite life, but the paparazzi has other ideas.
When Kaylee’s world comes crashing down, can Paxton convince her that their one wild night could turn into forever? 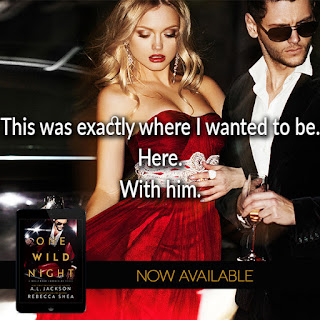 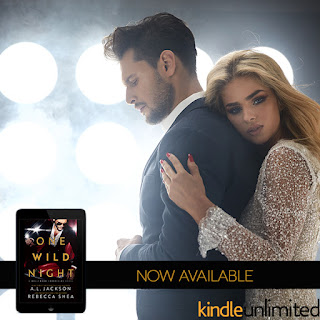 From the moment the first page is turned readers will find themselves charmed by this predictable yet satisfying romance of opposites attracting.  With each turn of the page two worlds collide under the weight and obligations of fame to keep readers rooting for the immensely likable main couple and their swoon-worthy relationship.

Paxton Myles is Hollywood’s hot property, beloved by men and women alike. He’s at the top of his game, a star on screen and off.  His nights too are full of gorgeous women, red carpets, and big paychecks.  He loves the actual job of acting but many of the other trappings of fame are starting to feel like a burden and a chore.  Everything’s starting to feel routine and he longs for something new.  That something new is the kindergarten teacher who lands at his feet out of nowhere.  Their instant attraction is combustible and one wild night is just the beginning for these two as they undertake a bumpy road to HEA.  Pax is a delicious hero with lots of substance beneath his perfect facade.  He’s charming and with each word and deed he showed Kaylee just how much she meant to him and while doing so it made me fall for him even more.

Kaylee Rose Burton is a fish out of water the moment she falls into Paxton’s arms.  She lives in a quaint and mundane world and enjoys quiet nights on the couch.  All that changes though when she meets Pax.  Quiet is no longer part of her vocabulary as she becomes part of his world, a piece of his heart, in a romance that deals with the pitfalls of fame while showing what’s most important when it comes to love.  Kaylee’s a very likable heroine, kindhearted and with no artifice.  She’s down to earth and easy to relate to.  With her, what you see is what you get.  And for Pax, he definitely wants to get more than one wild night with her.

This was a quick read of insta-love that took me on a dreamy journey to HEA.  I grew to quickly like this couple and was rooting for them every step of the way as they dealt with annoying paparazzi, questionable pictures, and a jealous publicist.  The high price of fame was on vivid display with these depictions, but there was an upside too as Pax and Kaylee’s romance had them whisking away for dreamy interludes.  All in all this was a fun and flirty romance that was both sensual and charming.  There’s nothing groundbreaking with this story, but there’s lots of decadent delights courtesy of this dynamic writing duo. 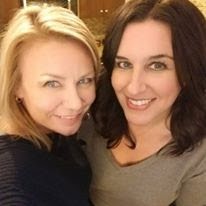 A.L. Jackson and Rebecca Shea are bestselling authors residing in Arizona. After being writing partners for five years, it only made sense that they’d put their minds together to bring their readers something fun, flirty, and sexy.