A young girl whose life has been anything but easy finds herself connected to a young man on the cusp of rockstar fame in this tale that puts readers through the wringer in an epic romance full of unexpected twists and turns.  Keep reading to get a tempting taste of STAR by BB Easton, along with my impressions of this gritty romance, then add it to your bookshelf.  In honor of this third installment in the 44 Chapters series make sure to fill out the form below for the chance to win a $25 GC too! 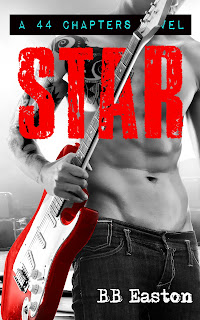 Because BB Easton had so much fun writing her best-selling, award-winning memoir, 44 CHAPTERS ABOUT 4 MEN, she decided to give each of her four men his own steamy stand-alone. STAR is Hans’s book—a real-life rock star romance…with a twist.
In 1999, Brooke “BB” Bradley met her Prince Charming. He was the tall, tattooed, wickedly handsome bass player for the up-and-coming rock band, Phantom Limb. But, more importantly, he was hers. She knew it the moment he flashed her that shy, dimpled smile.
And he knew it too.
Hansel “Hans” Oppenheimer wore his heart on one sleeve and scrawled lyrics about BB on the other. Unlike the assholes of her past, he showered her with tenderness, took her places she’d never been before, and showed her the type of all-consuming love she’d thought only existed in fairy tales.
But, like any good fairy tale, BB’s road to happily ever after was paved with challenges, and right when she least expected it…it forked.
In 1999, Brooke “BB” Bradley met her Prince Charming.
In 2000, she met her soul mate.

“So,” Hans said, bumping my shoulder with his, “Romeo is the most fuckable Leo, huh?”
My heart skipped a beat at hearing the word fuckable come out of his mouth. Then it skipped three more when I realized that he might be a little jealous.
I smirked and rolled my eyes. “Duh. I mean, it’s Romeo. He would literally die for me.”
“So that’s your type? Guys who would die for you?”
“No.” I rolled my eyes. “My type is guys with tattoos who would die for me. I have standards, okay?”
“Okay.” Hans smirked and took a sip of his beer, but his eyes never left mine. “You’re wrong though.”
“About what? My type?”
“No, about Romeo being the most fuckable Leo. You’re wrong.”
He said it again!
I waited for my heart to sputter back to life before taking the bait. “Don’t tell me you’re on Team Jack. Listen, I get it. He was adorable in Titanic, and yeah, I guess, technically, he did die for Rose, but you and I both know that door was big enough for two people.”
Hans’s pouty little mouth split into a two-dimple grin.
Damn.
He was all white teeth and black eyelashes and sweat-spiked black hair, and I had to stifle the urge to lick his skin just to find out how salty it was.
Hans held a hand up, laughing. “Dude. Don’t get me started on that fucking door. No, not Jack. Jim Carroll, from The Basketball Diaries. Hands down, most fuckable Leo.”
I threw my head back and squealed, “Oh my God! I totally forgot about that movie! A drug-addicted future rock star! You would say that! How perfect!”
“What?” Hans asked with a shrug. “You don’t have a thing for musicians?”
Hans’s gaze was too intense. His question too loaded. I broke eye contact and began digging around in my purse, trying to find a cigarette and a better response to his question than, I do now.
I popped a Camel between my teeth and looked back up at him with my cool partially restored.
“Only musicians with tattoos who would die for me,” I joked.
Ooh. Nice save.
Hans smiled as he produced a black lighter from his pocket. When he sparked the flint, a tiny flame appeared between us. I leaned into it, noting the way the flickering light softened Hans’s harsh features. He leaned in as well. His eyes were on my mouth. His tongue darted out to wet his lower lip. Adrenaline shot out to my extremities. Hot smoke filled my lungs. Then, he pulled away.
Tucking the lighter back into his pocket, Hans said, almost to himself, “I can work with that.” 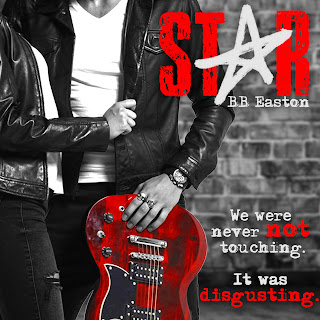 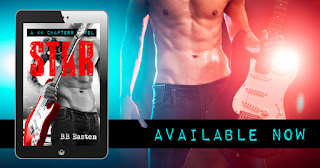 It’s a gritty and realistic read to be found amongst the pages of this epic romance that puts readers through the wringer, right alongside its colorful cast of characters.  From the moment we’re introduced to BB, readers discover an unconventional heroine who doesn’t always make the right decisions but whose imperfections are easy to relate to.  Her journey to HEA is just as unconventional with twists and turns readers won’t see coming but will be immensely satisfied by.  From the first page to the last it becomes a story that will leave you bruised but stronger for having taken the journey with these characters.

BB’s a larger than life young woman whose life has been full of poor choices, desperate attempts to find love, and men who left her bruised but not quite broken.  Still recovering from abusive boyfriends and dealing with an eating disorder she’s still tender while to the world she appears tough.  Music and partying is her salvation and it introduces her to the sexy musician who makes her feel special for the first time.  Theirs is a combustible connection, a connection that made them both feel alive, but also had the power to destroy them for all its intensity.  BB’s a heroine you want to see succeed, she’s smart and loyal, but puts up with far too much for far too long.  She chose men who at first made her feel good, but who ultimately became bad for her.  At the start she seemed like a little girl but by the end she had truly matured and stood up for herself in scenes that had me cheering.  Despite all those moments that left me frustrated by her decisions, I came to admire her as she finally realized what she needed and deserved.

The men in this story are a colorful hodgepodge of good men, bad men, and men who lose themselves along the way.  BB’s early experiences with men are abusive, both physically and emotionally, and at the start she’s still haunted by a stalker.  Her interactions with him are terrifying and twisted and in his presence she’s once again a little girl.  Meeting up-and-coming rock star Hans gives her moments of happiness, gives her a man who cares about her unconditionally and helps her care about herself.  He makes her feel loved and their connection was scorching and life-altering.  Hans started off as a drool-worthy book boyfriend who wore his heart on his sleeve.  He was utterly dreamy until he got caught up in the fame, drugs, and groupies.  Quiet and athletic Ken is yet another man who left an impact on BB.  He gave her the support she felt was missing and was a solid force in her life.  BB’s evolution centered around each of these men and being with each made her stronger.  Each taught her more about herself and by the final page I was left exhausted but proud of the young woman she’d become.

Readers looking for an epic read will want to add this one to their bookshelf. The choices and emotions are powerful and heartfelt and readers will find themselves quickly consumed by this tale.  The rock star world is on vivid display, along with the after affects of abuse and addiction, and it too immerses readers into this story.  By the turn of the final page readers will be left forever altered and comparing this unique romance to all others in a book I highly recommend.

BB Easton lives in the suburbs of Atlanta, Georgia with her long-suffering husband, Ken, and two adorable children. She recently quit her job as a school psychologist to write stories about her punk rock past and deviant sexual history full-time. Ken is suuuper excited about it.