The older woman/younger man theme is a favorite of mine and on crackling display in this romance set during one summer where a divorced woman finds herself being pursued by her younger next door neighbor.  Keep reading to get a tempting taste of Let Me Love You by Jessica Jayne, along with my impressions of it, then learn even more about this charming romance by visiting the other sites hosting this tour.  In honor of this sweet and sensual romance make sure to fill out the form below for the chance to win an e-copy of this book along with a $25 Amazon GC too! 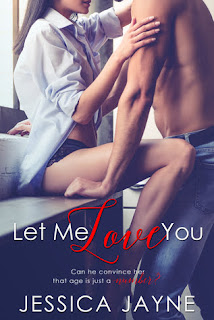 Twenty-three year old Ren Haynes returns home after graduating college with two goals–start his engineering career and claim the heart of his parents’ thirty-one year old divorced neighbor, Stacey Williams.
Stacey is nursing her broken heart and shattered ego. Not only did her ex-husband have an affair, he got the woman pregnant. Picking up the pieces of her life isn’t easy, so when Ren taps into her need to feel desired again, she finds herself in a position she never imagined.
Can Ren help to rebuild her confidence and convince her that age is just a number?

Readers looking for a quick yet immensely satisfying read will get just that with this older woman/younger man romance.  Years of being next door neighbors, years of finding a connection and a level of comfort as friends, has slowly become something more.  While some might frown upon the age difference I found these two a delightful duo whose romance swept me off my feet.

Stacey is still trying to recover from the end of her marriage and her ex starting a family with someone else.  Just when she thought she had her life all planned out she was left blindsided by betrayal and is left full of self-doubt.  Just when she needed an ego boost most her next door neighbor returns home and every perception she had of him gets upended.  Where once stood a young boy now stands a man...a drool-worthy man who wears his heart on his sleeve and who has a plan to finally claim Stacey.  Stacey’s a likable heroine whose self-esteem was bruised by her ex but who is slowly putting herself out there again.  She’s always felt comfortable around Ren, found him easy to talk to, but his being younger always kept her from admitting more.  With his return she can no longer deny his sensuality and charm and though she acknowledges the issues surrounding their age difference she doesn’t let it keep her from what her heart desires for too long in a realization that had me cheering.

While Stacey’s an admirable heroine it’s Ren who’s the highlight of this story and with each word and deed readers will fall in love with him too.  He’s always been attracted to Stacey but it was a teenager’s attraction and based on hormones.  Getting to interact with her on a more personal level the previous summer gave him greater insight into her heart and made his attraction burn brighter.  He’s already played the field and sowed enough wild oats to know that Stacey’s his future.  He just needs to convince her, and his overprotective mother of it, in a romance that warmed my heart while making me blush.  Ren was the quintessential book boyfriend.  He was committed to Stacey from the moment he returned and was willing to do whatever it took to convince her of their perfection.  He told it like it was, poured his heart out to her, and every layer of his heart that was revealed made him even more delicious.  He might have been younger in years, but he was wise in knowing just what Stacey needed and ended up being the perfect match for her.

This was a sweet and sexy read that made for an afternoon of decadent delights.  Stacey and Ren were a combustible couple whose interactions were beautifully balanced between erotically-charged encounters and tender moments.  While issues over their age difference are touched on they’re not dragged out.  The angst over it is quickly dealt with and again shows Ren’s maturity.  From start to finish this story held me captive in its warm embrace and with its HFN I can still picture their dreamy life together and recommend it to all lovers of romance. 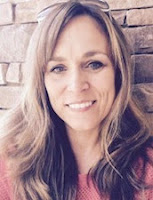 Jessica is a born and raised small town Ohio girl, who moved to the Sunshine State after graduating from college. She graduated from college with a bachelor’s degree in English. What college major could possibly be better than one that makes you read novels and write about them! Now she is thrilled to be able to share all the hot stories floating around in her head!
Jessica loves to travel and travel often! She shares her love of travel with her husband and children. She’s a huge sports fan, especially football. She  the Pittsburgh Steelers and the Ohio State Buckeyes! She’s a wine-making (and wine-tasting) aficionado. She loves all music. And nothing is better than sunset at the beach!
In the journey of life, she also married a wonderful man and had three beautiful (and sometimes crazy) children. Life is always an adventure!