It’s a combustible relationship from the start between a cocky and rugged director and a talented young woman that’s set in the world of television.  There’s more to each of these characters than what readers first see so keep reading to get a tempting taste of Can’t Stand the Heat by Peggy Jaeger, then discover even more about this contemporary romance by visiting the other sites hosting this tour.  In honor of this third installment in the Will Cook for Love series make sure to fill out the form below for the chance to win a $50 bookstore GC too! 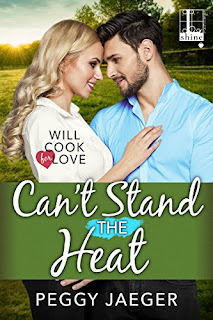 With three successful TV series under her belt, including her cousin Kandy’s, executive producer Stacy Peters is ready to helm her own show. But to make that happen, she has to do her network boss one favor first—spend two months on a ranch in Montana wrangling the notoriously difficult director of Beef Battles. Apparently, he eats producers for breakfast. Yet all Stacy can think when she meets the lean, rugged man is how hungry he makes her...
Dominic Stamp—Nikko to his very few friends—has had enough interference from TV newbies. And when Stacy climbs out of the car in Montana, he’s not convinced she’s even old enough to drive, much less produce his show. But he can’t deny that the long-legged blonde with the stubborn will and the dazzling smile whets his appetite. And as Stacy proves her talent with the crew and the budget alike, Nikko vows to prove to her that love is on the menu for both of them.

When Dan Roth caught her eye and grinned widely behind his costar’s back, Stacy lowered her head and bit down on the inside of her lip. If she hadn’t been looking down she would have noticed Nikko stop. But she hadn’t been looking where she was going and, subsequently, barreled right into him.
She would have ricocheted back and fallen from connecting with the solid wall of his chest as she hit if he hadn’t thrust his hands forward and grabbed her upper arms to prevent it.
Like a blast from a stun gun—quick, sharp and penetrating—she felt the heat of his touch burn through her blouse and sear straight through her skin.
Numbed, she dropped her tablet, her hands incapable of holding onto it. They splayed, open palmed, and sought purchase by grasping his elbows and clutching.
“Steady,” he commanded.
Stacy felt anything but. Words wouldn’t form correctly in her mind. All logical, rational thought had flown the moment the warmth of his hands seeped through the fabric of her blouse. It was as if she’d walked into an oven, the temperature set to broil.
His long fingers squeezed once, twice, then tugged her in closer.
Stacy couldn’t decide which was more intense: the heat in his eyes or the natural warmth radiating from his body.
“I’m—I’m sorry. I didn’t…I wasn’t…I—Sorry.” She tried to pull from his grasp, but he wouldn’t let go.
As earlier when she’d caught him staring at her, she once again felt the mesmerizing pull of his gaze and was powerless to look away.
And for some inexplicable reason found she didn’t want to.
The little shards of amber floating among the cognac color of his irises were lighter and brighter than she remembered. They looked like a wolf’s eyes, and, just like a wolf, their stare was predatory, alpha, and hypnotic.
“Nikko? We’ll all set to start up again,” Todd called from the doorway of the production trailer.
Without looking away from her, he called back, “Be right in.” He still hadn’t let go of her arms.
From deep down, as deep as she could reach, Stacy grappled for calm. She watched him watch her while she took a solid, full breath in, then relaxed it out.
“I’m sorry,” she said when she trusted her voice wouldn’t betray her again. “I wasn’t paying attention to where I was going.”
She shifted back, away from him, but he kept his hands around her.
This close she could read the exhaustion floating in his eyes and his determination to ignore it.
This close she could see the fine, subtle lines fanning out from the corners of his eyes as he narrowed them at her.
This close she could reach out and smooth the corrugations grooving down from his mouth to his rock solid jaw. That she wanted to do just that, to offer him any comfort she could, to soothe the pain he tried so valiantly to keep hidden, stunned her beyond all thought.
Nikko Stamp was not a man who would ever tolerate being comforted or coddled.
Why, then, did she think it was exactly what he needed?

Peggy Jaeger is a contemporary romance writer who writes about strong women, the families who support them, and the men who can’t live without them.
Family and food play huge roles in Peggy’s stories because she believes there is nothing that holds a family structure together like sharing a meal…or two…or ten. Dotted with humor and characters that are as real as they are loving, Peggy brings all topics of daily life into her stories: life, death, sibling rivalry, illness and the desire for everyone to find their own happily ever after. Growing up the only child of divorced parents she longed for sisters, brothers and a family that vowed to stick together no matter what came their way. Through her books, she has created the families she wanted as that lonely child.
Tying into her love of families, her children's book, THE KINDNESS TALES, was illustrated by her artist mother-in-law.
Peggy holds a master's degree in Nursing Administration and first found publication with several articles she authored on Alzheimer's Disease during her time running an Alzheimer's in-patient care unit during the 1990s.
In 2013, she placed first in two categories in the Dixie Kane Memorial Contest: Single Title Contemporary Romance and Short/Long Contemporary Romance.
In 2017 she came in 3rd in the New England Reader's Choice contest for A KISS UNDER THE CHRISTMAS LIGHTS and was a finalist in the 2017 STILETTO contest for the same title.
A lifelong and avid romance reader and writer, she is a member of RWA and her local New Hampshire RWA Chapter.