What happens in Vegas changes everything for a woman running from her Mafia past and the sexy rockstar who makes her his own.  Keep reading to get a tempting taste of Viva Las Vegas by Ember-Raine Winters, then count down the days until this book releases on May 3rd,  In honor of this third installment in the Las Vegas Nights series make sure to fill out the form below for the chance to win e-copies of the books in this series along with a $5 Amazon GC too! 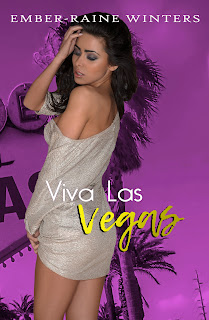 Jessica
Who would have thought that hiding from the mafia would explode over night., but having a sexy rockstar jumping off the stage to save me from a speaker changes everything. Paparazzi, poker games, goons, and being shot. I’m ready to run, except this sexy rockstar wants to marry me. What’s this Mafia Princess to do?
Jake
Who thought jumping off the stage to save a beautiful woman, I would end up losing my head, and it’s not from the concussion. She is sexy as hell playing professional poker, but things take a turn when her father finds her. So, I do what any man would do, I ask a Mafia Princess to marry me.

Ember-Raine Winters lives in sunny California with her two beautiful kids and a wolf. Also known as Apache her pure white Siberian Husky. She loves writing romance and reading just about anything she can get her hands on. And, football! She loves watching football and going to games. It’s one of her favorite ways to unwind. She dislikes the super-hot temperatures in her city and exercise. She hates to exercise but somehow her sister still gets her to do it every day. She also thinks it’s completely awkward talking about herself in third person. Ember loves connecting with readers so don’t be afraid to stalk her and drop her a line on social media.