Book Spotlight on The Only Thing by Marie Harte (Review & GIVEAWAY)

A fake relationship soon becomes so much more in this sexy, fun, and flirty tale where family and friends all have a hand in bringing together two very different people.  Keep reading to get a tempting taste of The Only Thing by Marie Harte, along with my impressions of it, then count down the days until this scorching romance hits bookshelves on May 1st!  In honor of this third installment in the Donnigans series make sure to fill out the form below for the chance to win a prize pack put together by the author too! 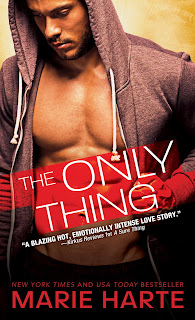 What do you do when a "fake" relationship is so much better than the real thing?
Hope Donnigan is finally getting her life together. She's working a job she likes, has some amazing friends, and is steering clear of Mr. Wrong. Now if only she could get her mother to understand that. Maybe a hot tattoo artist from the other side town is just the ticket to teach her mom a lesson.
J.T. Webster fell for Hope months ago at his sister's wedding. So when she propositions him to be her fake boyfriend to get her mother off her back, he's all in. The only problem is J.T. had no idea their pretend relationship would be better than anything real he's ever had…

Hope couldn’t find it in herself to blink, focused on God’s gift to womankind. Her aunt’s invitation to dinner had come at the perfect time, giving Hope an excuse to avoid her mother’s weekly nagathon. Since her idiot older brothers had hooked up with the loves of their lives, her mother had deemed Hope fair game again. So much for their pleasant détente, where Hope stopped blaming her mother for her many issues and Linda Donnigan stopped getting on Hope for breathing wrong.
Yet Hope hadn’t anticipated seeing J.T. Webster. He hadn’t been at the last two dinners Aunt Sophie had invited her to. “Greg?” she asked, her mind on other things.
Like how incredible J.T. filled out a simple T-shirt and jeans. The man had the prettiest chestnut-brown skin. She could stare at him for hours.
Liam was white, and she knew J.T.’s mom had been black. She also must have been gorgeous, because J.T. had his dad’s height and brawn, as well as the face of an angel who liked to sin. A lot.
She swallowed a sigh and continued to visually eat him up, wondering if the size of his hands and feet could be correlated to the size of other things.
God, get your mind off sex, Hope. His father is here! Aunt Sophie is here! And you’re off men, remember?
“Yeah, Greg,” J.T. said, looking concerned. “Gas Works Park ring a bell?”
Geez, she’d seen Greg and J.T. just last week. “Oh, no. No problems on that front.” To Liam, who studied her a little too intently, she explained, “Ex-boyfriend. A jerk I ran into. No biggie.” She shot J.T. a look, pleased when he kept quiet.
Last weekend, Greg, a guy she hadn’t dated or seen in over four months, had accused her of using her brother to bother him. But Hope hadn’t thought about Greg the Cheater since she’d dumped him, so she knew her brothers couldn’t care less about the guy. When Greg had tried to get a little gropey at the park, she’d taken him down, courtesy of the self-defense classes her brothers taught.
J.T. hadn’t had to do more than watch her take Greg out. She’d been so proud of herself… when she’d been able to tear her imagination from what J.T. would look like naked.
So sad those images replayed themselves over and over again.
“Right.” Liam stared from her to J.T., a question in his eyes.
“So who’s pregnant?” she asked, hoping to shift attention away from herself.
Rena squealed. “Del is! A tiny little bun in her McCauley oven.”
Del looked embarrassed, which was funny, because Del could out swear the mechanics she bossed around on a daily basis and took woman power to the next level. The woman had arms covered in tattoos, funky ash-blonde braids, and icy gray eyes that seemed to look through, and not at, a person.
Hope could see a faint resemblance from brother to sister despite their different skin tones. Both J.T. and Del had the same shape of their eyes and stubborn chins, just like their father. Only someone as obsessed with J.T. would have noticed that, she realized, and felt like a moron for being so enthralled with the man.
Fortunately, Liam and Rena started badgering Del for details, letting Hope off the hook.
Since she hadn’t yet greeted her aunt, Hope started to turn and found J.T. suddenly in her way. “Oh, sorry.”
He put a hand out to stop her from bumping into him. And sweet baby sexy, she felt the touch go from her arm all the way through her body, centering between her legs. Oy.

With her latest release Ms. Harte has brought together the friends and families inhabiting some of her much-beloved series to have them all put in their two cents when it comes to the love lives of Hope Donnigan and J.T. Webster.  What starts out under the guise of a lie soon becomes oh so much more, but with familial intervention and inner fears it’s a somewhat rocky road to HEA.  Add in a bit of unnecessary drama courtesy of a scary secret admirer and readers will be left feeling a bit of whiplash but satisfied by all the action, sexiness, and banter.

Hope Donnigan is unlucky in love.  As the lone daughter in her family she has been surrounded by loving and overprotective brothers and a judgmental mother who have added to her burden in finding true love.  After two particularly awful relationships she’s sworn off men, but her mother’s criticism and meddling has her doing the unthinkable...creating a fake boyfriend (who’s the complete opposite of what her mother wants) in hopes of ending her mother’s matchmaking forever.  As she describes her new “boyfriend” though he starts sounding a lot like the hot tattoo artist she recently met at a family function.  This one lie changes everything for her and unexpectedly gives Hope exactly what she’s always longed for in a rocky and scorching journey to HEA.  Hope’s a likable heroine.  She’s strong-willed, down-to-earth, with a loyal heart. She’s not overly ambitious and isn’t consumed with finding a rich man to marry. She just wants to be happy.  She’s an average gal who told it like it was.  She has no filter when it comes to talking about sex and it often made me chuckle. She ultimately sees herself married with kids, but is tired of being hurt, and is in no rush despite her mother’s machinations. There’s a lot about Hope that’s easy to relate to and it had me rooting for her every step of the way.

J.T. Webster comes from a big family too, an outspoken and loving family.  He’s a bit of a player, but he’s so charming and sexy that women are happy with whatever crumbs he’s willing to give them.  Though there aren’t many women who’ve caught his attention...Hope definitely has him wanting her and happy to play her fake boyfriend. They’re a crackling couple from the very start and J.T.’s more than happy to jump into his role wholeheartedly.  In scenes that were funny yet erotically-charged you could see him growing closer to her against his better judgment as he’s also had heartache in his life courtesy of his dad who’s twice widowed.  It’s made him leery of opening his heart for fear the happiness he feels while being with Hope will be snatched away. When it comes to J.T.’s looks he’s one sexy beast!  He’s big and burly and more than capable of flexing his muscles.  Whereas Hope is blond with a sense of carefree to her, he’s got an aura of darkness and steadiness.  He’s devoted to family and gentle with the kids.  He’s charming with a talent for dirty talk too that made their scenes even hotter.  I fell for him completely and am still drooling over him nightly in my dreams!

Hope and J.T. are a likable and entertaining couple.  Their relationship was easy, minus the unnecessary crazy admirer, sweet and sexy with no angst.  The honesty between them about what they want and who they are made them even more likable and had me rooting for them.  Learning about each other to make their fake relationship more real was erotically-charged and their extended foreplay quickly evolved into so much more. Through their words and deeds it’s clear that they were a couple long before they admitted it to themselves.  Surrounding this dynamic duo was a large cast of characters from previous books who all started to get jumbled after awhile.  I forgot who was who and wished there hadn’t been so much stuffed into this story as it all became a distraction.  Another thing that I never warmed up to was Hope’s mother.  She meant well but her words and judgments were hurtful.  She could tear Hope down with just a few words and I wanted to slug her whenever she came on the scene.  The mystery surrounding Hope’s admirer was also unnecessary.  Hope and J.T. had enough excitement going on just becoming a couple that the danger and suspense this brought was just another distraction. Hope and J.T. were utterly delightful all on their own, with rapid-fire banter full of sexy innuendos, and I became captivated by them in a story where watching them together was satisfaction enough.  All the extras just got in the way of my enjoyment of Hope and J.T!  Throughout this story readers will have a perpetual smile on their face, along with a few blushes, as you soak in their decadently delightful relationship while waiting to see where life takes these families and friends next.

Award-winning author Marie Harte has been writing professionally since 2005. She’s both a NY Times and USA Today bestselling author and has written over 100 books and counting. Marie writes books with heat, humor, and Harte.
She writes independently and for several publishers, to include Sourcebooks and Entangled. Though currently writing contemporary romance, she also writes paranormal and romantic suspense. Basically, everything romance with a touch of spice.
Before turning to writing full-time, she earned a B.A. in English from Pennsylvania State University and spent several years in the United States Marine Corps as a communications officer.
Marie currently lives in Central Oregon with her family. There’s nothing she likes more than finding a good book to read and a great cup of coffee to drink.