Book Spotlight on Forever My Hero by Sharon Sala (GIVEAWAY)

Reader’s heartstrings will be pulled in this emotional and heartwarming romance that brings together two people who’ve experienced loss and who are finally ready to take a chance on love again.  Keep reading to get a tempting taste of Forever My Hero by Sharon Sala, then add this romance of second chances to your bookshelf when it releases on February 26th.  In honor of this seventh installment in the Blessings, Georgia series make sure to fill out the form below for the chance to win a Home Sweet Southern Prize Pack too! 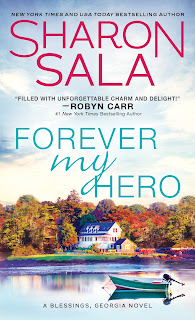 Every storm they’ve weathered…has led them to each other.
Dan Amos lost his wife and son years ago, when they inadvertently got in the way of a death threat meant for him. He’s never had eyes for anyone since, and he doesn’t want to. But fellow Blessings resident Alice Conroy sparks something inside him...
Newly widowed, Alice was disillusioned by marriage and isn’t looking to fall in love anytime soon. Then a tropical storm blazes a path straight for the Georgia coast, and as the town prepares for the worst, Dan opens his heart and his home. The tempest is raging, but Alice and Dan are learning to find shelter…in each other.

***GET A LONGER GLIMPSE OF THE FIRST CHAPTER OF THIS BOOK here.***

SHARON SALA has over one hundred books in print and has published in five different genres. She is an eight-time RITA finalist, five-time Career Achievement winner from RT Book Reviews, and five-time winner of the National Reader’s Choice Award. Writing changed her life, her world, and her fate. She lives in Norman, Oklahoma. Visit her on the web at sharonsala.net.

a Rafflecopter giveaway
at February 23, 2019