A man whose past was taken from him, and a woman who’s missed out on life because of her desperation in finding a cure for her mother, find an intense connection that could lead to her death.  Keep reading to get a tempting taste of Lost and Found by Lexi Blake, along with my impressions of it, then add this second installment in the Masters and Mercenaries: The Forgotten series to your bookshelf! 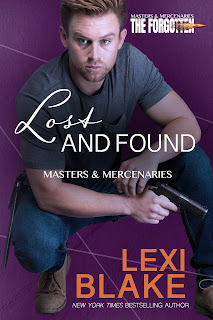 Owen Shaw and his “brothers” lost everything, their entire existence erased. Science had robbed he and all the Lost Boys of their memories and their past, but not their future. Hunted by every intelligence agency in the world, they are focused on two goals: find a cure for what was done to them and ensure that the technology that ruined their lives doesn’t get out into the world. Rebecca Walsh might be the key to achieving both. Owen has been studying her closely, living in her building, and he cannot resolve how such a beautiful, giving woman could have helped design the evil process that destroyed his past.
Dr. Rebecca Walsh has dedicated her life to researching the secrets of the mind. Her atmospheric rise in her field was fueled by the horror of watching her mother’s agonizing journey into madness at the hands of a disease with no cure. She vowed to never rest until she finds it. But obsession takes a heavy toll, and when Owen moves into her building she realizes how much of her life she has missed out on. Owen opens her eyes to a whole new world, filled with joy, laughter, and possibly love.
Owen and Rebecca grow closer, unraveling more about each other and the mysteries surrounding her connection to Hope McDonald. As the sinister forces working against the Lost Boys descend on Toronto, secrets long buried are uncovered that could shatter the bonds holding the Lost Boys together and cost Rebecca her life. 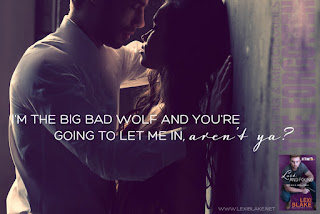 Readers will find themselves once again captivated by this newest entry in The Forgotten series, an off-shoot of Ms. Blake’s engaging Masters & Mercenaries series.  In a tale full of twists and turns, readers will also find their heart’s breaking over all that befell the main couple before they found each other as well as fearing what the ghosts of their pasts will do to their future.  From the first page to the last, this is one heckuva rollercoaster ride that will keep you on the edge of your seat, a witness to a sweet and scorching romance full of danger to their bodies and souls.

Owen Shaw was once a man full of loyalty to his team, a man devoted to his mother and sister, a man who was ultimately given a heartbreaking ultimatum by an insidious doctor bent on taking over the world by turning soldiers into her personal slaves through medical manipulation.  The decision he made ended up being a no-win situation that ended with his family dead and him with amnesia and scars that have left him feeling like a traitor.  Desperate to make amends for sins that aren’t his own, Owen’s doing all he can to help a new team formed out of other men whose lives were similarly stolen to destroy the technology that took their pasts in hopes that no one else will ever be hurt in the future. Owen was once a fun-loving man who jumped into every situation without any hesitation, but he’s now a much paler shadow of the man he used to be as he’s now willing to stay in the background.  He feels like a traitor and assumes that others see him that way too.  To get through the day, alcohol and meaningless sex have now become his crutch and it’s a heartbreaking thing to see.  Owen’s carrying a heavy burden of guilt and it’s left him broken, but the moment he comes face to face with his latest assignment it felt like a jolt of electricity. Meeting Doctor Becca Walsh makes him feel alive again, talking to her has him wanting to hold her close though he knows that any relationship they form will only end badly as it’s his lies that have brought them together.  Despite all that though, he still wants her and when her life is put in danger by unforeseen adversaries he’ll do whatever it takes to keep her safe.  I adored Owen and his sexy Scottish accent!  I ached for all that was taken from him but cheered the joy, and the reason for living, that he found with Becca.  He was an intriguing dichotomy of being dominant one moment while letting Becca take control when she needed to in a connection that amped up the book’s sensuality.  He’s a decadently delightful hero who captured my attention the moment I first saw him and his story didn’t disappoint.

Becca Walsh has always been a bit of an outsider, never quite fitting in completely.  The super smart daughter of two genius parents had her always the youngest student in school with others jealous of her accomplishments.  It didn’t leave her with many friends but it did fuel her close-knit connection to her parents.  This close connection left her especially devastated as her mother’s dementia robbed her of her dignity and her life, something that fueled Becca’s need to find a cure for this heartbreaking disease.  Her discoveries captured the attention of Doctor Hope McDonald (the truly twisted woman who robbed the Lost Boys of their lives) and put her on Owen and his teammate’s radar.  From the outside Becca seems like a quiet and reserved person, someone uncomfortable in public, someone devoted to her work to the exclusion of all else.  In reality though that picture isn’t quite accurate. Yes, she’s devoted to her work as she doesn’t want others to suffer the way her mother did.  But she’s definitely not reserved as she’s come to realize that she’s letting life slip away from her and is more than ready to end her sexual sabbatical.  She’s a bit quirky, a bit irreverent at times, and I adored her love of superheroes.  She’s comfortable in her own skin, isn’t one to apologize for going after what she wants, and this is exactly what makes her and Owen such a good pairing.  While she may look guilty at first, readers and Owen’s team quickly discover the truth which lets Owen enjoy her for as long as he’s willing to let himself be happy. Becca’s an endearing heroine, smart and funny, and easy to relate to.  When danger comes calling she’ll have to do more than play at being a superhero though in this fast-paced and suspenseful story.

This was an exhilarating read from the first page to the last, one full of unexpected twists and turns as a new villain emerges, one that’s under the shadow of Hope McDonald.  New and dangerous connections are also revealed as glimpses of the other characters are continually being doled out.  Along with all the suspense comes the combustible romance between Becca and Owen, one that will have readers rooting for them from the moment they meet.  Owen’s a tarnished hero, one weighted down by a past forced upon him, one he’s desperate to make amends for and his need for redemption endeared him to me.  Meeting Becca saw a weight lifting off him and from that moment on I was fully invested in their pairing.  Becca too came alive in his arms and it made for scorching encounters teeming with sensual and playful banter that made them a formidable couple.  Surrounding this unforgettable main couple is an equally captivating cast of secondary characters whose stories I’m looking forward to reading as it’s a twisty journey that each character has had a part of.  I’m especially intrigued by Tucker and his connection to Hope McDonald, the crackling connection between Robert and Ari, the reveal of a new villain, as well as another “Lost Boy” Sasha who seems lackadaisical but is in fact all knowing. All in all this was another winner in a series that keeps you on the edge of your seat with a story arc full of unexpected twists.  Suspense and romance are perfectly balanced to keep readers wholeheartedly invested in these men and their need for justice in a series that keeps me coming back for more as I wait breathlessly for the next installment. 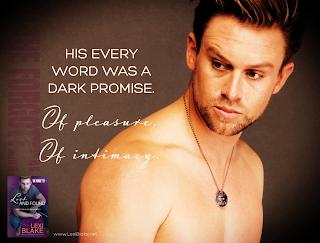