Fans of the paranormal will find themselves drawn to this suspenseful series starter featuring a jaguar shifter bodyguarding another jaguar shifter in an exhilarating journey to HEA.  Keep reading to get a tempting taste of You Had Me at Jaguar by Terry Spear, then start counting down the days until this book releases on February 26th.  In honor of this first installment in the Heart of the Shifter series make sure to fill out the form below for the chance to win 1 of 5 copies of this book too! 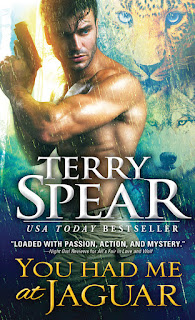 They’re not the only ones on the prowl…but they’re the most dangerous...
The United Shifter Force gives jaguar agent Howard Armstrong an impossible task—to protect fierce she-jaguar Valerie Chambers, when the last thing she wants is protecting. They’re going international to take down a killer and he can guard Valerie all day long. But guard his heart? He doesn’t stand a chance.

Drinking a beer at the San Antonio Clawed and Dangerous Kitty Cat Club, Howard Armstrong looked more relaxed than Val had ever seen him. Although she’d only seen him working vigorously in training exercises. Why was he here? She should have known she’d run into him again—they were working for the same jaguar police force, after all. He made her think of long, hot nights and impossibly sexy dreams.
She had been astonished to learn he had left the Enforcer branch to work with the JAG’s new United Shifter Force unit. And a little disappointed. She’d thought she might see him again during training. She had wondered if he’d gotten as much ribbing about her taking him down as she had.
“He let you so he could get close and personal.” A couple of the women she worked with had made that comment or something similar. “Good move to take him down as if we were in the field and not in training,” one of the guys had told her, impressed with her wiliness. “He must be getting soft,” another male Enforcer had joked.
Howard was all hard muscle, nothing soft about him.
The Enforcer branch was a specialized jaguar policing force that eliminated jaguar shifters who were guilty of committing violent, deadly crimes against humans and shifters alike. The agents of the USF worked as a combined force of wolves and jaguars. Howard had made a great Enforcer because he did things on his own, a loner. Many of the Enforcers were like that, which was why Val couldn’t understand why he changed jobs to be a team player with a mix of shifter types.
Howard still worked out of the Houston office, as far as she knew. She’d wondered if he was working on a case in San Antonio. When she’d spied his vehicle here for days with no sign of him, she’d asked her boss—and Howard’s—if he was on a mission. They’d both denied it. She didn’t think the USF agents went solo on missions. Was he really just on vacation?
Sipping a margarita at a table across the club from him, Val watched Howard snack on chips. Then he was joined by a brunette—pretty, petite, and wearing a short red dress and low red heels. Was the woman a jaguar or a wolf? Maybe a date?
When Val had seen Howard’s black pickup truck with the distinct jaguar in a jungle painted on both sides and smelled his scent around the vehicle, she’d figured he still owned it. Even so, she had run his license plate to make sure someone else hadn’t bought it. She had learned it was still his truck. She suspected Howard was after someone. But this was the first time she’d actually seen him or the woman, which meant he had to be undercover.
The jungle music made Val involuntarily tap her boot on the tile floor, and she had the greatest urge to get up and dance. The smell of sweet mixed drinks, beer, humans, jaguars, and a few wolves drifted to her. Palm trees in pots, vines stretching to the ceiling, and a skylight way above simulated a jungle scene like most jaguars loved. The summer sun was still high enough to spread sunlight through the windows filtering down through the living foliage.
Since she couldn’t get away to the jungle very often, she enjoyed going to these places to immerse herself in the jungle feel from time to time, more so when she wasn’t on a mission. Here it was air-conditioned, with a light mist spraying the plants and water droplets collecting on the leaves. Jaguar shifters wearing leopard-print fabric danced on elevated stages, and bright lights flashed across the stages and dance floor, making the scene appear otherworldly.
She glanced again at the tables that were cast more in the dark, in case Benny Canton had already arrived and she’d missed seeing him when she had walked through the place earlier searching for him. This was the kind of job she loved. Eliminating rogue jaguars, the murdering kind. She hadn’t heard of a case like this in a good long while—a jaguar who’d murdered his wife, just because she threatened to leave him. That was one of the differences between the wolf shifters and jaguars. The wolves mated for life; jaguars could divorce.
She watched the door open when someone new arrived—two single males, neither of them her perp. Benny was known to frequent this club, having left his job as a construction worker after murdering his wife. He had no family, and she hadn’t found any other place he could have holed up. So she’d staked out the club for the past three days, watching for him or some of his friends, who’d proven to be just as elusive as he was. She’d had no luck running into him or the others. But this club was the only lead she had.
She’d considered that he might have gone across the border, because the shifters often did so to play in the jungle as wild jaguars. And for a rogue, he would have extra incentive to leave the country. 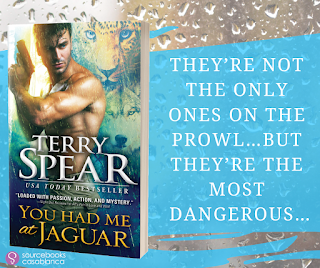 USA Today Bestseller, TERRY SPEAR writes urban fantasy and Highland medieval romance: hot wolves, jaguar shifters, medieval Highlanders and lots more. She also pens young adult paranormal romance. She has over sixty paranormal and other books to her name, earned Publisher’s Weekly Best Books of the Year, and has been featured in The International Wolf Magazine, Woman’s World and BGS Book Review Magazine. She creates award-winning teddy bears in the heart of Texas and gardens. She retired from USAR after rappelling, mountain climbing, learning water survival, qualifying with a number of firearms, survived the obstacle courses, leadership reaction courses and confidences courses – and knows if she can do it, her characters can overcome any obstacle she puts in their path.

a Rafflecopter giveaway
at February 18, 2019