Book Spotlight on The (Half) Truth by Leddy Harper (GIVEAWAY)

A female chef who cooks up a fake relationship with her friend’s cousin to save face when working with her ex-fiancée soon finds herself in hot water as the lies quickly overwhelm her and the burgeoning romance that’s becoming all too real.  Keep reading to get a tempting taste of The (Half) Truth by Leddy Harper, along with Ms. Harper’s discussion of this fictional fake relationship, then add this rom-com to your bookshelf.  In honor of this newly-released romance make sure to fill out the form below for the chance to win a $25 Amazon GC along with a digital copy of this book too! 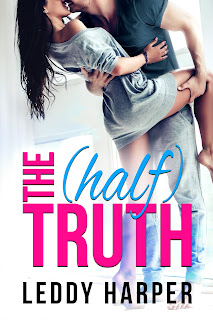 Tatum Alexander is so close to realizing her dream of becoming a sous chef she can taste it, but working at her ex-fiancé’s restaurant with his new girlfriend was never in her career plan. To save face and prove she’s moved on, Tatum cooks up a lie that she’s in a relationship with her best friend’s superhot cousin. There’s just one problem: Jason only recently moved to town, and he has no idea they’re already “dating.”
Jason’s a recovering ladies’ man who shouldn’t be on the menu, but that doesn’t mean he’s immune to Tatum’s quirky charm. Giving her lie a kernel of truth, they decide some no-strings-attached fun between the sheets can’t hurt. But as Tatum’s forced to keep making up stories to cover her original fib, she has a hard time separating what’s real and what’s fake—including her feelings for Jason.
With too many tales spun, Tatum can only watch in horror as her collection of yarns begins to unravel, leaving everyone she cares about feeling betrayed. After so many lies, will it be too late to set the record straight? And more importantly, will she be able to convince Jason there’s truth in their love?

“You do know Michael used to be engaged to Tatum, right?”
“Yeah, he told me. But that was a while ago. Does it bother you, Tatum? You’ve never said anything about it.”
I thought about pointing out that six months wasn’t really a while ago, but I decided to let that go. And the idea of admitting how it felt to see him smile at her or whisper into her ear, let alone hear about all the things I didn’t have to witness, made me want to disappear. “Oh, no. I’m so over it. So, so over it.” And since stopping while I was ahead had never been my strong suit, I added, “In fact, I’ve been dating someone.”
“You have?” Both Rebecca and Amanda asked the same question at the same time, but while Rebecca’s voice was filled with excitement—which matched her bright eyes and ridiculous hand clap—Amanda’s was more cynical.
“Yup. And he’s amazing.”
“What’s his name?” Again with the doubtful tone from Amanda. She’d been part of my postbreakup support system, so I couldn’t exactly blame her for questioning my sudden confession. After everything Michael had put me through, this was something I definitely would’ve told her … had it been true.
“Uh … Jay. His name’s Jay.”
“Where’d you meet him?” This time, it was Rebecca asking, as if we were girlfriends sharing juicy gossip over mimosas at a spa.
I had no idea why I’d even started this. I should’ve known they’d jump all over it like rabid dogs on a T-bone. Yet I couldn’t back out now.
“We met at a barbecue.” Short and sweet, not many details I’d have to remember. Perfect.
“When?” Dammit, Amanda. She was no longer on my Christmas card list—not that I’d ever sent any out, but that didn’t mean I didn’t have a list in case one year I felt ambitious. And if that year ever came, this heifer wouldn’t get one.
“Two weeks ago.”
“What’s he look like?” Rebecca’s blue eyes shimmered.
“Yeah, tell us what he looks like, Tatum.” And now she could forget getting a birthday present from me. It also helped that I had no idea when her birthday was.
“He’s tall. Hot. A man’s man.” That could’ve been anyone. I was still safe.
“How very nondescript of you.”
“Well, you know how it is, Amanda.” I glared at her, hoping she’d get the hint and go with it. “It’s still new, and I wouldn’t want anyone to get jealous of how perfect he is.”
“No need to worry about me. I’m very secure in my relationship with Michael.”
I wanted to ask Rebecca how secure she could possibly be with a man who, six months ago, had broken up with his fiancée on her birthday because he said he wasn’t sure if he was ready for something so serious. But I held back the wicked comments that longed to slip off my tongue.
The next words out of my mouth were Michael’s fault. Had he not forced me to spend the day with his new girlfriend, listening to every detail of their relationship, I never would’ve been in this position.
“He has dark hair that’s trimmed short on the sides and a little longer on top, just enough to look messy if he runs his fingers through it. His eyes are this amazing shade of green—sometimes they’re light, like blades of grass at the beginning of spring, and other times they’re darker, similar to the color of a Christmas tree. And he’s gotta be over six feet tall. When I stand next to him, I’m eye level with his chest.” I glanced at my phone in my hand, noticing that the photo still filled the screen, and realized I had described Jason to a T.
“Go on,” Rebecca prodded. “Is he fit like Michael?”
By this point, I was in it to win it.
“He makes Michael look like a wimp. And I’m not just saying that because Michael’s my ex, either. I could wash my clothes on his abs.” Well, that was taking it a little too far. I had to rein it in some if I wanted her to actually believe me. “He works out all the time, so he’s totally in shape. Not an inch of fat on him.”
“He sounds dreamy,” Rebecca said with a sigh.
“Yeah, he does. Almost too good to be true … like you made him up. You probably don’t have any pictures of him, do you?” As only a friend would, Amanda loved watching me dig my own grave.
“As a matter of fact, I do.” I thought about sticking my tongue out at Amanda in an immature “shows what you know” kind of way, but then I realized what I’d just done. In my need to prove her wrong—even though she wasn’t—I’d inadvertently dug my hole even deeper.
“Well, let’s see it.”
I had no choice but to show them the photo on my phone. I had to admit, though, the surprise on Amanda’s face when she saw it gave me a sense of victory—like winning Monopoly only because I cheated. Rebecca’s approval was simply the icing on the cake.
A cake that came crashing to the ground about thirty minutes later.
Rebecca stared at something over my shoulder and asked, “Hey, Tatum, isn’t that Jay?”
“Huh? Jay who?”
“Uh … your boyfriend,” Amanda reminded me with a quirked brow.
I craned my neck so fast it gave me a cramp. There was no way it was him. Okay, so that was wishful thinking on my part. Not only was there a chance he was here, but he was, in fact, here. At Taste of the Town. Standing a few tents away next to another guy.
My life was over.
Having Amanda believe I had lied about a boyfriend was one thing—having multiple people catch me in said lie was another. Add in the probability of Jason being one of those people, and … shoot me now. 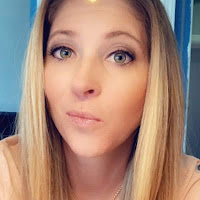 Leddy Harper had to use her imagination often as a child: she grew up the only girl in a family full of boys. At fourteen, she decided to use that imagination to write her first book, and she never stopped. She often calls writing her therapy, using it to deal with issues through the eyes of her characters.
Harper is now a mother of three girls, making her husband the only man in a house full of females. She published her first book to encourage her children to go after whatever they want, to inspire them to love what they do and do it well, and to teach them what it means to overcome their fears.

a Rafflecopter giveaway
at February 20, 2019