Time in the office just got hotter as a sexy yet klutzy woman finds herself attracted to her new boss in a slow-burn romance that will charm readers every step of the way.  Keep reading to get a tempting taste of Catastrophe Queen by Emma Hart, along with my impressions of it, then add this fun and flirty romance to your bookshelf! 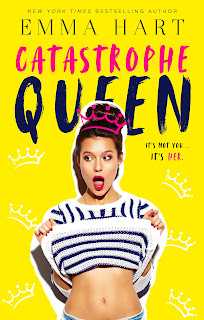 It’s not you. It’s me.
No, seriously. It is me. Not only does my name literally mean “unfortunate,” but that’s the story of my life.
Everything I touch turns to cr*p. An apartment fire—that I swear I was not responsible for—means I’m living back at home with my s*x-mad parents. Yay, me!
Which is why I need my new job as personal assistant to Cameron Reid to get back on my feet. Three months in this job and I can move back out and, hopefully, remember to turn off my flat iron once in a while.
Ahem.
On paper, my job is easy. Make coffee. Book appointments. Keep everything in order.
Until I walk in on my boss, half-naked, wearing nothing but the kind of tiny white towel that dreams are made of.
Now, nothing is easy—except our mutual attraction. But he’s my boss, and you know what they say about mixing work and pleasure: unless you do p*rn, it’s just not worth it.
Or is it?

I took my coffee from the counter and scanned the room for an empty table. There wasn’t one, which killed my chances of wasting more time before I went home.
With a sigh, I checked my phone for the time and headed for the door. I was going to end up at home earlier than I’d planned, and I needed to check with my mom to make sure there wasn’t anything kinky happening somewhere in the house.
I’d considered bleaching my eyes enough in the last few weeks, thank you.
I was fairly sure I was safe because my grandfather and great aunt were coming to stay to celebrate Grandpa’s eightieth birthday. It was still a miracle my exhibitionist mother shared DNA with either of them. Unlike her, they were reserved, polite, and didn’t flash their flesh in the hopes of getting out of a speeding ticket.
Really, it was no wonder I was a walking disaster.
I pulled up my messages and clicked on my mom’s name. My thumb was poised to type the burning question of whether or not it was safe to come home when I glanced up.
And saw the car screeching to a stop, mere inches from me.
I screamed and stepped back. My heel caught on the curb, sending me toppling backward, and both my coffee and phone went flying. My cup slammed against the sidewalk, splattering hot liquid everywhere right as I managed to save my phone from certain death by concrete.
My heart was beating so fast it should have exploded, and adrenaline raced through my veins. I gripped my phone against me so tightly that the edges pressed painfully into my skin.
Oh my God.
I’d just almost died.
Maybe slightly dramatic, but I probably wasn’t far wrong. I didn’t even know I’d stepped into the road. When had that happened? Had I really been in that deep into my own little world that I hadn’t even checked for traffic?
Dear God.
How was I still alive?
The back door to the sleek, black car that somehow hadn’t run me over swung open. From my vantage position on the sidewalk, the first thing I saw was a pair of shiny, black shoes attached to legs wearing perfectly-pressed, light gray dress pants.
I dragged my gaze up from the feet, over the door of the perfectly clean car, and stared at the most beautiful man known to humankind.
Thick, dark, wavy hair covered his head, curling over his ears. Lashes the same dark shade of brown framed impossibly bright-blue eyes that regarded me with a mixture of shock and concern, and my ovaries about exploded when he rubbed a large hand over full pink lips and a stubbled, strong jaw.
“Miss—I’m so sorry. Are you okay?”
Scrambling to my feet as he approached me, I tugged down the leg of my pants and grabbed my pursed. “Yes. I mean—it was my fault. I wasn’t paying attention. I’m sorry.”
He let go of the car door, showing broad shoulders and just how well that gray suit was tailored to him, and picked up my coffee cup. “All the same, I think we can share blame. Are you sure you’re not hurt?”
Just my dignity, and by this point, I was running low on it anyway.
I shifted, taking a step back. “I’m fine, really. Thank you.”
“Can I replace your coffee? Give you a ride anyway to apologize?” His expression was so earnest, his concern so genuine that I almost gave in.
Almost.
I had almost walked into the front of his car, then proceeded to embarrass myself in front of everyone on the street.
“No, no, it’s fine. I’m not far from home.” I clutched my phone and purse straps a little harder. “Again, thank you, but I should be going.”
He nodded as if he understood. “Uh, miss? Did you drop something there?”
My eyes followed the direction Mr. Dreamboat was pointing. On the side of the road, tucked against the curb, was a pair of white, cotton panties with flamingos on them.
My white, cotton panties with flamingos on them.
Swallowing, I met his bright eyes and shook my head. Dear God, please don’t let me blush. “No. I’ve never seen them before.” I backed up a little more. “Thank you for not running me over.”
Mr. Dreamboat grinned, his eyes brightening with his smile. “I’d never be able to forgive myself if I’d been responsible for running over someone as beautiful as you.” He glanced toward my panties, then winked at me.
There was no doubting that I was blushing this time around.
You could fry eggs on my cheeks.
So I did the only thing any self-respecting, twenty-five-year-old woman who’d just almost been run over, tripped, and dropped her dirty panties could do.
I ran.
But only like two blocks, because I was in heels, and I had the fitness levels of a hippo.
Then I grabbed a cab. 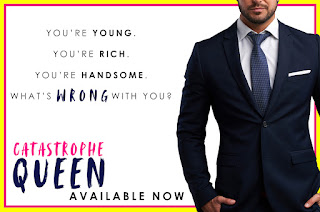 Readers will find themselves charmed by this romance the moment they start reading it as it weaves a sweet and sensual web around you through its likable characters and witty banter.  After a week of reading emotionally intense reads I appreciate this carefree romance, its lack of angst, and its Calgon promise to take me away from it all.

Mallory Harper is a walking disaster, known by all as an accident waiting to happen, and it’s just one part of her charm.  She’s also immensely likable, self-deprecating in her klutziness, and can get along with everyone.  Her personality is larger-than-life and it lights up every scene she’s in which makes her a perfect balance to the calm and collected Cameron.  The start of the story has Mallory down on her luck, homeless because of a fire and jobless because of being fired, living back home with her over-sexed parents and annoying relatives.  Things take a turn for the better though after she starts working for a premier real estate agent as she proves her worth in the office while forming a surprising friendship with the boss.  The more time they spend together the more they learn about each other in a slow-burn friends-to-lovers romance. Mallory may seem a bit flighty but she’s extremely talented when it comes to people as she easily handles the most demanding of clients.  She and Cameron may seem like opposites, especially when it comes to socioeconomic status, but they just click through fun and flirty banter and through their increasing sexual tension.  On a whole though theirs is a carefree romance that made for an enjoyable journey to HFN.

Cameron Reid’s the quintessential boss as he’s kind and courteous, especially around Mallory, and it’s clear there’s a connection between them.  From the moment his car almost hit her he’s been drawn to her.  While others laugh at her klutziness, he finds it endearing and goes out of his way to comfort her when moments of klutziness arise.  Though he knows he should keep his hands off her he can’t keep fighting the daily temptation she presents as they evolve from friends to something more in a sweet and sensual angst-free romance full of smiles.  Cameron’s a drool-worthy hero, handsome and truly nice, someone unimpressed by his own wealth.  His scenes with Mallory were full of heartwarming words that utterly charmed me and had me rooting for them to finally get together after an endless build-up.  Readers accustomed to alpha heroes will enjoy the more down-to-earth Cameron and the subtle heroic deeds he did on a daily basis to put Mallory at ease.

The romance between Mallory and Cameron is simply sweet, a slow-burn that frustrated me the closer I got to the end though as I was clamoring for a bit of steam. While their interactions were fun and flirty and entertaining to watch, I still would’ve liked a moment or two of scorch as their connection always felt like it was ready to erupt.  Not only are the interactions between the two of them entertaining, but so too are their scenes with the secondary characters. Mallory’s scenes with her family, and her friend Jade, were realistic and full of snark which made for many chuckle-worthy scenes.  Her family were brash and they jumped off the page with their tell-it-like-it-is nature.  Cameron’s interactions with his family were similar, though his family weren’t near as boisterous, and it was further proof of how perfect they are for each other. From start to finish this was a breezy read that offered a nice cleansing of the palate from all the heavy reads out there and I definitely recommend it to all those looking for a charming romance with likable characters.

Emma Hart is the New York Times and USA Today bestselling author of over thirty novels and has been translated into several different languages.
She is a mother, wife, lover of wine, Pink Goddess, and valiant rescuer of wild baby hedgehogs.
Emma prides herself on her realistic, snarky smut, with comebacks that would make a PMS-ing teenage girl proud.
Yes, really. She's that sarcastic.