Things continue to heat up in this scorching and suspenseful trilogy featuring a fake marriage and a quest for revenge.  Keep reading to get a tempting taste of Luck of the Devil by Meghan March, along with my impressions of it, then add this exhilarating read to your bookshelf.  In honor of this second installment in the Forge series make sure to fill out the form below for the chance to win 1 of 4 Amazon GCs too! 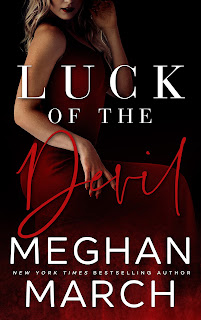 New York Times bestselling author Meghan March continues the story of ruthless, calculating billionaire Jericho Forge in Luck of the Devil.
My poker face has always been one of my greatest assets, along with my grit and determination. I was beholden to no one. Asked permission for nothing.
Then Jericho Forge took my life by storm.
I traded my freedom for something infinitely more precious, but I didn’t realize he was holding an unbeatable hand.
Now, all I have to do is survive the high-stakes game that is my life—with my heart intact.
But not falling in love with Forge? That will take the luck of the devil.
***Luck of the Devil is the second book of the Forge Trilogy, and should be read following Deal with the Devil. The Forge Trilogy concludes in Heart of the Devil. 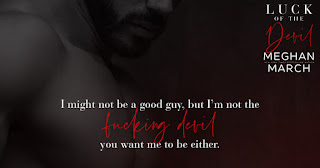 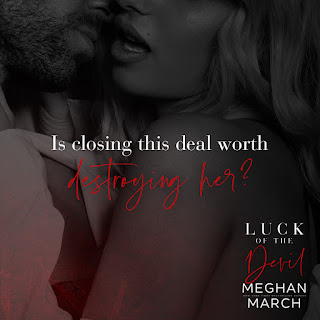 After the exhilarating conclusion to the first installment in the Forge Trilogy, things take an even more complicated turn as danger starts befalling those who the main couple have sworn to protect.  The villain behind all these dastardly deeds isn’t clear yet, but Ms. March gives readers plenty of options in a journey that kept me on the edge of my seat from the first page to the last.

Jericho Forge’s background is made much clearer in this installment after the mystery surrounding him in the previous book and it’s a heartbreaking past that left him bruised and determined to avenge the one person he saw as family. Throughout this book Jericho shows himself to be an interesting dichotomy of sweet and caring as well as commanding and determined.  It makes him a sexy and compelling temptation that puts India’s heart in chaos as the secrets and plans he has for revenge put their future in jeopardy.  I too was drawn to Jericho, drawn to his sweet words and deeds along with his surprise over his burgeoning feelings that led to many aaawwwww moments, and by the end of this book my jaw was laying on the floor wondering where life will take him next.

India Baptiste is a strong-willed woman, lacking in trust after a past where many men left her disappointed and on her own.  She’s quick to doubt Jericho, even after the antics of her former friend Bastien and his hurtful words that further confused her.  She enjoys the pampering Jericho lavishes her with but she’s determined to make her own way as she doesn’t like feeling grateful to him.  To that end readers get another in-depth look at professional poker playing and it adds to the story’s overall sensuality and suspense.  I liked India’s strength but her constant doubts regarding Jericho left me frustrated a time or two.  Numerous times he stood up for her, her family, and showed his pride in her card playing talent, so her doubts in him seemed uncalled for.

From start to finish this was a captivating read, a tale that moved at a breakneck pace, that kept me guessing as to who the real villain is.  The author has crafted a tale full of questionable characters with questionable goals and the uncertainty adds to the suspense.  When it comes to the romance of India and Jericho it’s clear that they make a formidable couple.  Both in and out of the bedroom they’re crackling, exuding sensuality along with a bit of dominance.  It makes for scorching encounters that had me blushing as well as seeing an even sexier side to Jericho.  Surrounding this appealing main couple, a couple that’s larger than life, is a small cast of secondary characters that round out the already captivating storyline.  Some are friends and family, some are foes, and some are yet to be determined.  Each one stands out though, each one has a moment where they take center stage and it has me longing to know more about each one.  The overarching mystery has been well-crafted by Ms. March, with many possible villains, and the clues that have landed like land mines have me counting down the days until all the crumbs come together to reveal “whodunnit”.  Readers will enjoy the mystery and sensuality found in this book, will be drawn to its complex hero and heroine, and on a whole I wholeheartedly recommend this trilogy to those looking for immensely satisfying action and romance.

Making the jump from corporate lawyer to romance author was a leap of faith that New York Times, #1 Wall Street Journal, and USA Today bestselling author Meghan March will never regret. With over thirty titles published, she has sold millions of books in nearly a dozen languages to fellow romance-lovers around the world. A nomad at heart, she can currently be found in the woods of the Pacific Northwest, living her happily ever after with her real-life alpha hero.

a Rafflecopter giveaway
at February 13, 2019