A hockey player being blackmailed for the discovery of a sex video he made in college has him reaching out to his friend for her legal help, since she was his co-star, in this crackling romance of a fake relationship that becomes all too real.  Keep reading to get a tempting taste of Trying to Score by Kendall Ryan, along with my impressions of this third installment in the Hot Jocks series, then be sure to add it to your bookshelf! 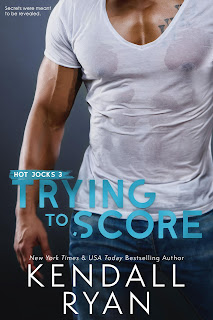 Teddy King excels at many things. Playing hockey. Check. Scoring on and off the ice. Check. Being stupidly attractive ... Double check.
Despite his demanding schedule, he still finds time to annoy me. I knew him way back when. Before he was the guy everyone wanted a piece of, he was just a rebellious college co-ed and one of my more energetic study partners.
But secrets have a way of getting out, and a steamy encounter from our college days (that we probably shouldn't have filmed) is about to cause a major scandal. Unless we can work together to stop it.
Teddy’s no stranger to hard work … but the thing he wants most?
Is me. 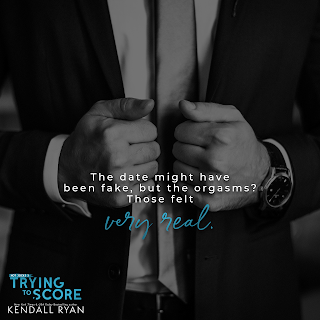 Ms. Ryan’s Hot Jocks series continues to entertain courtesy of its witty banter and crackling main couples.  In this third installment a second chance leads to a fake relationship becoming all too real when a hockey player finds himself being blackmailed over a sex tape made in college with his co-star the only one who can help him now. From the first page to the last readers will find themselves charmed by this tale while getting a few blushes along the way.

Teddy King’s at the top of his game, becoming a free agent at the start of next season, with everything seeming to go his way.  All that changes though when he gets a threatening message regarding a sex video from long ago, a video that he promised his friend he’d destroyed.  Needing her help to right this wrong means close quarters and their fake relationship becoming very real courtesy of long-hidden feelings rising to the surface.  Teddy and his friend Sara have remained friends since that long ago night but Teddy has never been able to ignore how attracted he is to her.  Their fake relationship soon gives him a reason to no longer hide the truth and through sweet words and deeds he slowly wins her over in a sensual and charming romance.  Teddy’s a drool-worthy hero with a kind heart that’s boldly on display in scenes with his ailing grandfather. When it comes to talking dirty he’s definitely tops too as his comments made me blush and smile at the same time. Throughout the story he’s supportive of his teammates but is jealous of them too for finding their own HEAs.  His fake relationship with Sara though gives him just the excuse he needs to win her over in an endearing journey to his own HEA.

Sara Dawson’s on the cusp of becoming partner of the law firm she’s been working at for years, a lone female trying to get what she’s always dreamed of. That long-ago video, a single moment amongst a semester of her and Teddy being friends with benefits, is something she hasn’t forgotten but its release would mean the end of her dreams.  She’s worked hard to be taken seriously by the men in her law firm, sacrificed time and the chance to find HEA, in pursuit of a partnership and will do whatever’s necessary to see that happen...even fake date Teddy.  Their connection is clear from the start as each interaction teems with sensuality, and each touch is electric, as movie nights at home and late night talks have them growing closer.  Sara’s an immensely likable heroine, one you can easily see yourself being friends with.  She’s strong-willed and bold in discussing her desires when it comes to sex. She gives as good as she gets too in her bantering with Teddy in a relationship that thoroughly entertained me.

On a whole this was a delightful story told from the perspective of both of the lead characters, characters that made this a quick and satisfying romance.  Sizzling interactions blended with action on and off the ice in this romance that made me smile while charming me through Teddy’s words and deeds.  Surrounding this appealing main couple was an equally entertaining cast of secondary characters, couples from previous installments along with teammates whose stories I hope will be told in the future.  Fans of sports romances will be drawn to this series, captivated by its unforgettable main couple and sizzling encounters, and for those who haven’t yet read it.....what are you waiting for? 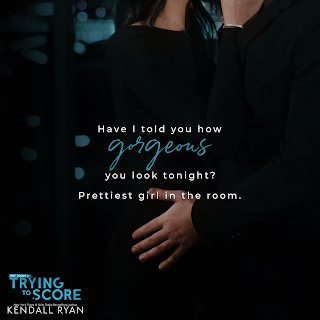