Book Spotlight on Wish Upon a Cowboy By Jennie Marts (GIVEAWAY)

A man trying desperately to keep his ranch finds himself teaming up with a strong-willed single mom on a mission of her own in this contemporary romance.  Keep reading to get a tempting taste of Wish Upon a Cowboy By Jennie Marts, then start counting down the days until this book releases on Tuesday November 26th.  In honor of this fourth installment in the Cowboys of Creedence series make sure to fill out the form below for the chance to win 1 of 3 sets of the first three books in this series too! 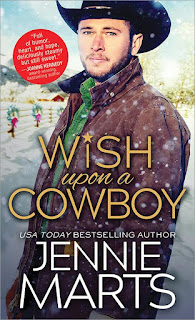 Hot on the ice and tall in the saddle...
Rancher and hockey coach Logan Rivers’ attempts to hire a housekeeper are hindered by women more interested in marriage than meal-planning. So when snarky Harper Evans arrives with zero romantic interest in him, he couldn’t be happier. But as he gets to know her, he finds himself hungering for more than her cooking.
Down-on-her-luck single mom Harper Evans came to Colorado with one goal: to find her son and bring him home. Temporary work for a local rancher seems perfect, but to keep the job she has to deny her feelings for the hot cowboy who’s heating up her kitchen.
Logan’s secret learning disability has caused a financial mistake that could cost him everything. With the holidays approaching and a storm closing in, he and Harper have to save his ranch and fight for her son. But can Harper trust the cowboy who is offering her both a home—and his heart?

Logan walked back to stand next to her, their shoulders not quite touching as they looked at the tree together.
“I love the star on top,” she told him. “Some people like to put an angel on the tree, but I’ve always preferred the star.”
“Yeah? Why’s that?”
“I don’t know. I guess I think of the star as a promise of something amazing ahead. Like the star the wise men follow in the Christmas story. They don’t question it, they don’t second-guess it, they just believe. And it led them to everything they would ever need. They didn’t have to earn it or even deserve it. They just had to follow the star, and the promise would be fulfilled.” The lights on the tree blurred and transformed to tiny twinkling stars as she blinked back the tears filling her eyes.
“Sorry. I love the Christmas star the most, but I think stars in general are amazing. They’re so far away, and we shouldn’t even be able to see them, but we can. I think each one is like a little miracle, and maybe they shine so brightly because they hold so many of our wishes.”
She shook her head. “Gosh, that sounded so dorky. I sometimes think sappy stuff like this, but I don’t often say it out loud. I didn’t mean to get all gushy.”
“It’s not gushy at all.” Logan gazed up at the star. “We always put the star on last, but I don’t know that I’ve ever really thought about what it represents. But I like what you said, that the star is a promise of something amazing ahead.”
They were standing shoulder to shoulder and not looking at each other, but she still felt as though they were seeing each other. As though here in the glow of a hundred tiny, sparkling lights, they were each giving the other a small piece of themselves, holding it out to see if the other would take it and cherish it, or refuse it with scorn.
“I guess I’ve always thought stars represented whatever it was that you wanted,” he said. “Like your deepest desire. You know, you reach for the stars like you’re going for something you really want.” The back of his hand grazed hers, and his pinkie finger twined around hers. “We’ve always used the stars to guide us. The night sky was the original GPS. If you’re ever lost or can’t find your way, you can use the stars to lead you home.”
His words were doing nothing to quell the emotion building in her throat. She’d always loved the Christmas star, loved what it represented, but she didn’t think she’d ever said her feelings about it out loud. Or maybe she had.
Her son loved everything to do with space and the stars. She’d hoped to get him a telescope for Christmas this year. He loved to learn about the stars and the planets. One morning at breakfast, he’d told her he wanted to be an astronaut, to fly into space and be among the stars.
Harper remembered smiling and asking him why—and having her heart shatter into a million pieces when he said it was so he could be with his dad.
Thinking about Michael and Floyd and all she’d lost had pain piercing her heart. She missed them both so much. So much that she couldn’t see the right path to take or the correct choices she was supposed to make. She needed a star right now—needed something to guide her, to lead her to her deepest desire. She felt more lost than she’d ever been.
She stared into the lights of the tree and prayed for guidance and wisdom and for something to give her hope to hold on to. The ache in her chest felt as if it might turn her inside out and swallow her whole.
She started to tighten her hand into a fist and realized her fingers were now completely entwined with Logan’s. A surge of warmth had flowed through her a few seconds ago when his pinkie had gently looped around hers, but when had she taken his hand? And why was she squeezing it now as if he were the lifeline she’d been looking to cling to?
A sob threatened her throat, and she let go of his hand. She didn’t want to cling to anyone. She’d been down that road before, hanging on to other people, holding to the idea that they would save her. But there was no one to save her now. Not Michael, not her grandmother, and not the tall cowboy standing next to her.
The only one who could save her, and her boy, was her. The only one she could truly count on to come through for her was herself.

JENNIE MARTS is the USA Today bestselling author of award-winning books filled with love, laughter, and always a happily ever after. She is living her own happily ever after with her husband, two dogs, and a parakeet that loves to tweet to the oldies, in the mountains of Colorado.
Find out more about this author and her books HERE.

a Rafflecopter giveaway
at November 23, 2019