Readers will find themselves drawn to this tale of a man thought long-dead who comes back from the grave, who longs for revenge, but instead finds romance with a woman who no longer believes in the emotion.  Keep reading to get a tempting taste of Angel in a Devil’s Arms by Julie Anne Long, then add this sensual historical romance to your bookshelf.  In honor of this second installment in The Palace of Rogues series make sure to fill out the form below for the chance to win a print copy of the first book in this series too! 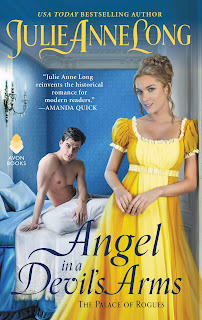 He has devil’s blood in his veins. At least, that’s always been the legend. How else could the Duke of Brexford’s notorious bastard son return from the dead? The brutal decade since Lucien Durand, Lord Bolt, allegedly drowned in the Thames forged him into a man who always gets what—and who—he wants. And what he wants is vengeance for his stolen birthright...and one wild night in Angelique Breedlove’s bed.
Angelique recognizes heartbreak when the enigmatic Lord Bolt walks into The Grand Palace on the Thames, and not even his devastating charm can tempt her to risk her own ever again. One scorching kiss drives home the danger.
But in the space between them springs a trust that feels anything but safe. And the passion—explosive, consuming—drives Lucien to his knees. Now his whole life depends on proving his love to a woman who doesn’t believe in it...because his true birthright, he now knows, is guardian of Angelique Breedlove’s heart. 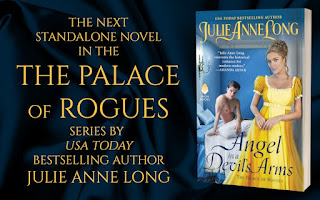 USA Today bestselling author JULIE ANNE LONG originally set out to be a rock star when she grew up (and she has the guitars and fringed clothing stuffed in the back of her closet to prove it), but writing was always her first love. Since hanging up her guitar for the computer keyboard, her books frequently top reader and critic polls and have been nominated for numerous awards, including the Rita, Romantic Times Reviewer’s Choice, and The Quills, and reviewers have been known to use words like “dazzling,” “brilliant,” and “impossible to put down” when describing them. Julie lives in Northern California.

a Rafflecopter giveaway
at November 10, 2019