The past comes back to haunt a rockstar in this tale of starting over in a sizzling story set in the rockstar world.  Keep reading to get a tempting taste of Rock Harder by MJ Roberts, along with my impressions of it, then add it to your bookshelf.  In honor of this second installment in the Chord Brothers series make sure to fill out the form below for the chance to win a $100 GC along with other goodies too! 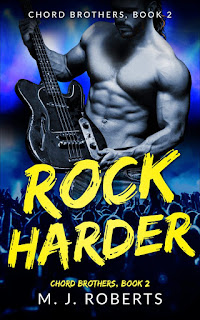 After an unthinkable tragedy shakes his world as a teen, Bassist Jase Evanovich puts part of his life on hold to take care of his best friend, look after his little sister, and push his band toward fame. His charm, humor, and rip-roaring music get him through the day (if not sleep-tossed nights). His rock solid existence is shaken when a stunning beauty shows up surprising him with white-hot attraction and the beautiful face of his dead girlfriend.
Kate Warner is captivated by Jase immediately—too much. But she’s got a past laden with secrets and a strict directive not to date anyone in the band. With everything she’s ever worked for and her entire future on the line, she can’t take a chance on the strong, alpha hero who rocks harder than any man she’s ever met.

As a fan of rock star romances I was drawn to this book.  Having read the previous book in this series also had me wanting to read this as I fell for these characters from the very start.  It’s a story of secrets and sizzle found amongst the pages of this emotionally engaging romance that will pull readers along in a captivating journey to HEA.

The band Hard Chord is becoming even more well-known in this second installment in the series which leads to the filming of a music video that has a shocking impact on best friends Ryder and Jase.  In the previous book readers discovered the sad event that binds these two men together-the death of Ryder’s sister who Jase was in love with-and it plays a role in this book too.  It causes a moment of heart wrenching pain for Ryder, who’s love for Lexi is helping him heal from the past, while making Jase question his feelings for the model who shows up for the video shoot.  With each turn of the page Jase continues to struggle with his feelings for Kate in a push/pull romance that sometimes frustrated me while making me blush at other times.  Through it all Jase is a drool-worthy hero, one who takes the time to get to know Kate.  Her face might look like his dead love, but she’s a woman trying to forge her own path who fears for her future if she gives into the temptation of Jase.  It’s an instant attraction for him who slowly flirts with her, woos her through sweet and sensual words and deeds, and who will take any bit of attention she throws his way.  He charmed me every step of the way with his fun and flirty attitude, while never rushing Kate into something more until she’s ready.  He has a kind heart and is self-sacrificing, which is especially on display when Kate’s job gets put in jeopardy for being with him.  From the first page to the last it’s clear that he’s drawn to Kate just for herself and his commitment to claiming her had me rooting him on every step of the way.

Kate’s last job as a model took her to the set of a music video which introduced her to an unforgettable band who changed her life irrevocably.  Seeing Jase is like getting hit by an electric charge, just looking at him makes her burn though she knows that being with him can lead to nothing good.  Becoming the PR person for rock band Zeet Fleet, who are mentored by Hard Chord, is the opportunity of a lifetime and is something she doesn’t want to screw up as she has something to prove to her judgmental father.  Working with Zeet Fleet though means lots of time spent with Hard Chord...and Jase...and makes it even harder to keep saying no.  If she wants to keep her job though she’ll have to keep fighting her feelings for the man who charms her at every turn.  Kate’s a likable character, a strong-willed one who loves her sister and who’s trying to do all that she can to make things better for the two of them.  Her interactions with Jase were playful early on and oozed sexual tension.  I was impressed by her resistance at times while frustrated by her at other times as he’s a decadent delight that I couldn’t say no to!

On a whole this was an enjoyable romance set against the backdrop of the rock world with scenes both on stage and off.  The bandmates of both Zeet Fleet and Hard Chord were larger than life with interactions between them both playful and familial.  Their interactions often put a smile on my face and were a definite highlight of this story.  Each character practically jumped off the page and I definitely hope we get more stories about the bandmates of both of these bands.  Jase and Kate were a crackling couple whose push/pull frustrated me while keeping me on edge in desperate anticipation.  Their issues were real and handled in a believable manner by Ms. Roberts.  There’s much to love about this book but there is one small quibble I had and that was that a lot of time was spent early on with Zeet Fleet.  I almost forgot about Hard Chord a time or two as it seemed like the story wasn’t supposed to be about them.  Thankfully Jase was there to call or text Kate and remind me of their exhilarating journey to HEA.  From start to finish I found this a delightful read that is another wonderful addition to the genre that I highly recommend to others!

THE PREVIOUS BOOK IN THE CHORD BROTHERS SERIES, ROCK HARD, IS ALSO BEING RELEASED IN AUDIO. 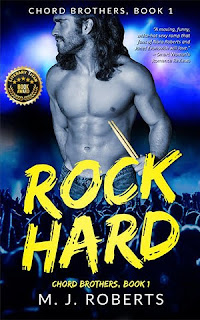 Drummer Ryder Chord has been living half a life since he was 16 when a brutal tragedy strikes his family and he and his best friend hit the road. Ryder, desperate to forget, throws himself into touring life and writing music. When Lexi joins the band, Ryder's life becomes almost tolerable. Until one day when the rest of the band isn't there and Ryder and Lexi have to share a hotel room: with only one bed.
Rule number one of band-dom: You never sleep with anyone in the band.
Rule number one of bro code: You never sleep with anyone's sister. You definitely never sleep with your best friend's little sister.
Rule number it's so obvious: It's a count even a drummer can keep: You Never. Ever. Sleep with your best friend's little sister when she's in the band...and he is, too.

Then Lexi takes off her jacket. Her white tank top plasters to her body, instantly soaking it to almost see-through. A cab screeches to a halt in front of us. Thank God it’s a van-style cab or our screw factor would have crescendoed to beyond what I want to deal with
An old black man helps us pile our gear into the back and we get in.
“Where to?”
“A hotel in a safe neighborhood,” Lexi says.
He laughs. “You know this is Detroit, right?”
“Well, safer neighborhood.”
Lexi takes out her phone and begins searching for hotels.  She starts mumbling under her breath. The streets begin to look better and her curses get creative. She makes phone calls.
“What?” Lexi says into the phone. She hangs up, again, looking dejected.
She turns and looks at me. “Yeah, there are three conferences in town this weekend, a big tech show, and a car trade show.” She stifles a sigh. “Even the Air B&Bs are booked up; it’s not looking good.”
“Try the Comfort Suites,” the driver says over his shoulder.
Lexi calls them. Bingo.
We get there, wearily load our stuff—which is whatever Lexi throws into a small duffle, and my custom-made bass drum and crazy expensive cymbals that I always take in every time we sleep somewhere, just in case someone breaks into the bus— onto a big luggage cart and roll up to the front desk. A frumpy but still cute and sweet old lady helps us.
“It’s a queen and a twin, is that okay?”
“Fine,” Lexi says.
Now it’s closer to four thirty in the morning. Usually not a problem, but we’d played twelve gigs in nine days without a break. Hit Man’s hitting it the last straw. Lexi is swaying on her feet.
Of course our room is at the end of the hall.
We get in there and both stare.
One bed.
“I’ll sleep on the floor,” I say.
“Don’t be ridiculous. I can fix this.” She calls the front desk.  “Well, can you bring up a trundle bed?” There’s a pause. “No, no, I understand.”
She hangs up just as I whisper, “Extra blankets,” thinking I’ll be crashing on the floor.
“Thick as manure and half as useful,” Lexi says.
“Listen I can sleep on the—“
“I’m too fruck-er-nuttering tired to argue.” She peels off her tank top, revealing a skintight pink push-up bra. Holy shit.
“I’m going to take a hot shower. That bed is plenty big; pick a side. If I were any more wiped, I’d be a dish rag.”
She turns away from me, and not a moment too soon because I’ve been keeping my facial expression blank, but as soon as she turns away my jaw hinges open, because holy hell, her beautiful, perfect, full, pink-covered breasts are now forever burned in my brain.
F………fffffffuck.
Rule number one of band-dom: You never sleep with anyone in the band.
Rule number one of bro code: You never sleep with anyone’s little sister.
Rule number two of bro code: You definitely never sleep with your best friend’s little sister.
Rule number it’s so obvious it’s a one-two-three count even a deadbeat drummer can keep: You never. Ever. Sleep with your best friend’s little sister when she’s in the band… and he is too.
She is the hottest thing ever in a hot pink—no, now naked and hot and wet—and less than fifteen feet away from—I rub a hand over my face. I am so screwed. 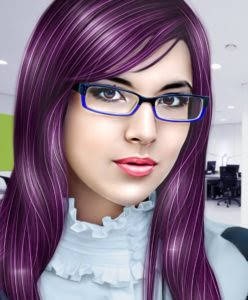 Fan favorite M. J. Roberts is known for lovable characters, witty dialogue, exciting plot twists, fast-paced action that keeps you on the edge of your seat, and romance scenes that sizzle.
With more than two million copies of stories in circulation worldwide, Roberts is well loved for creating characters who feel as real as your most cherished friends.
M.J. Roberts is the author of seventeen novels, including the popular Rock Hard: Chord Brothers series, and over twenty short stories; she’s won six literary awards including the Literotica Summer Lovin’ Contest 2015 for Risk Your Heart and the April 2019 gold medal from Literary Titans for Rock Hard: Chord Brothers, Book 1.
Roberts is also an editor, songwriter, audiobook narrator, and professor of creative writing. A modestly humble egomaniac with a penchant for superheroes, she’s married to an awesome professional musician (a.k.a. The Rock and Roll God).  Her ‘I’m with the band’ status and access to a bunch of real-life alpha bad boys means she’s always saying ‘Anything you say can and will appear in print. Names will be changed to protect the guilty.’

a Rafflecopter giveaway
at November 08, 2019