Book Tour for The Beast of Beswick by Amalie Howard (REVIEW)

A strong-willed young woman desperately wants to save her sister from an unhappy marriage in this historical romance that has her making a deal with an angry and scarred duke.  Keep reading to get a tempting taste of The Beast of Beswick by Amalie Howard, along with my impressions of it, then add this exhilarating romance to your bookshelf! 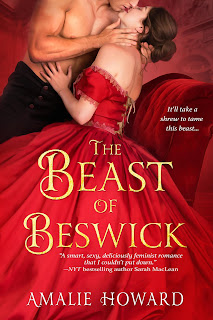 Beauty and the Beast meets Taming of the Shrew in this laugh-out-loud and heartfelt Regency romance.
Lord Nathaniel Harte, the disagreeable Duke of Beswick, spends his days smashing porcelain, antagonizing his servants, and snarling at anyone who gets too close. With a ruined face like his, it's hard to like much about the world. Especially smart-mouthed harpies—with lips better suited to kissing than speaking—who brave his castle with indecent proposals.
But Lady Astrid Everleigh will stop at nothing to see her younger sister safe from a notorious scoundrel, even if it means offering herself up on a silver platter to the forbidding Beast of Beswick himself. And by offer, she means what no highborn lady of sound and sensible mind would ever dream of—a tender of marriage with her as his bride.

As a fan of historical romances I found much to like about this story of two strong-willed people fighting an attraction that practically jumps off the pages.  Both have been hurt in their pasts which leads to them being cautious about their futures.  Add in some fast-paced and witty banter and you end up with an unforgettable romance, and couple, who I rooted for every step of the way.

Lady Astrid Everleigh once thought her future secure after being proposed to by a rich member of the Ton.  Unfortunately he wasn’t a gentleman and ruined her reputation after she refused to give in to his desires weeks before they were to marry.  With her sister now catching his attention Astrid’s determined to keep her safe by making a deal with the devil...scarred returning war hero, Lord Nathaniel Harte.  It’s a deal that has her offering her assistance with selling some of his father’s figurines as well as offering up herself in marriage.  It’s an offer made out of desperation at first, but the more time they spend together the more drawn to him she becomes in a rocky journey of push/pull on the way to HEA.  Astrid’s a wonderful heroine, a bit modern in some of her actions, but a delight nonetheless in her interactions with her sister and Thane.  From the moment she met Thane there was a spark between them, a crackling connection that had each of them giving as good as they got.  Astrid’s an appealing heroine with a kind heart who would sacrifice all to make her sister safe and happy and her self-sacrifice endeared her to me even more.  Watching her and Thane dance their merry dance made for a sweet yet sensual journey to HEA that kept me glued to the pages from the first page to the last.

Lord Nathaniel Harte grew up angry and bitter as the spare to his brother being the heir.  He felt that he was lacking a purpose while his brother was being groomed to take charge of the family’s estate.  Like most other spares Thane chose to join the military where a single event changed his life irrevocably.  Coming home a bitter and scarred man has him cutting himself off from others, believing that no woman would ever want him, all while he fights his attraction to the outspoken young woman asking for his help.  Thane’s scars run deep though.  Not only do they mar his face but they also weigh on his heart and soul as he constantly brings them up when in Astrid’s presence.  I can certainly understand his negative feelings though as many of those living in their community see him as someone to fear...while I just think he needs a hug instead.  I enjoyed his interactions with Astrid, enjoyed her getting the better of him while pushing back on his preconceived notions of what a real lady does.  Being with Astrid dragged him out of his self-imposed darkness and it made for a crackling romance that made me blush and laugh a time or two.


From the first page to the last this story kept me fully invested in its outcome courtesy of its decadently delightful main couple.  Their banter sizzles and teems with sexual tension in a push/pull connection that sometimes frustrated me but always had me cheering them on to their richly rewarding HEA.  Astrid’s a bit modern in her thinking, so readers who are sticklers for historical realism might be bothered by her, but it just added to her likability for me.  When readers first meet Thane he’s clearly angry, but spending time with Astrid brings out another facet to him too.  He becomes protective of her and her sister, a bit jealous when it comes to Astrid’s attentions to those loyal to her, and I thoroughly enjoyed the man he’s become because of Astrid and his scars.  On a whole they’re an immensely appealing duo with a romance that’s sweet and sizzling, a connection that jumped off the pages to keep me rooting for them.  Surrounding this entertaining main couple were a cast of equally entertaining secondary characters, a nice hodgepodge of characters good and bad.  The most memorable off all were those I saw as villains.  Beaumont, the man who ruined Astrid’s reputation with his lie, was especially unlikable as he gave off a dangerous vibe when around Astrid as well as his surprising connection to Thane’s injury in the war.  Astrid’s aunt and uncle were also memorable as all they cared about was money and using their nieces to get it in a realistic depiction of the vulnerability of young women historically.  From the first page to the last I found much to recommend this book, from its witty banter to its sensual tug of war, and I look forward to what Ms. Howard brings us next.

Amalie Howard is the co-author of the #1 bestseller in Regency Romance, My Rogue, My Ruin, in the Lords of Essex historical romance series.  She is also an award-winning author of several young adult novels, critically acclaimed by Kirkus, Publishers Weekly, VOYA, School Library Journal, and Booklist, including Waterfell, The Almost Girl, and Alpha Goddess, a Kid's INDIE NEXT selection.
She currently resides in Colorado with her husband and three children.