Book Spotlight on Room To Breathe by Liz Talley (GIVEAWAY)

Readers will be drawn to this tale of starting over as a mother/daughter duo find themselves dealing with life changes that will pull readers into this heartfelt story from the first page to the last.  Keep reading to get a tempting taste of Room To Breathe by Liz Talley, along with getting greater insight into the characters courtesy of Ms. Talley, then add this story to your bookshelf.  In honor of this emotional story make sure to fill out the form below for the chance to win a $25 Amazon GC along with a digital copy of this book too! 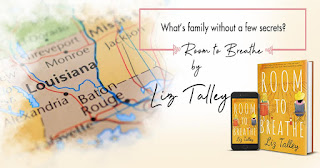 Starting and Starting Over in Room To Breathe by Liz Talley...
Room to Breathe is a story of two southern women at very different stages in their lives who are experiencing the same sense of "starting over.” Daphne Witt is weeks from turning forty, in a career that she never expected, and ready to start dating after a divorce. Her daughter Ellery is essentially untested in the world. Young, beautiful, accustomed to everything going her way, Ellery finds herself with a less than dazzling job, a distracted fiancé and, for the first time ever, doubts about who she is and where she’s going. When the novel begins, we find Daphne dealing with an awakened libido she thought long dead, and Ellery struggling to accept working for her mother and living with a fiancé who has little time for her. Both women redirect their dissatisfaction toward secret desires - Daphne for a much younger contractor, and Ellery for a secret email pal who thinks she’s her mother. Like the vines of a vineyard, things get tangled quickly by decisions that not only threaten the fragile mother-daughter relationship, but each woman's future.
One thing I really like about Daphne is her self-awareness. She’s been content to stand in the wings while everyone else in her life commandeered the spotlight, but now she’s ready to take her turn on the stage. She’s bumbled into a dream she never knew existed as a children’s author, and she’s really good at what she does and becomes an overnight success. But her family, even her ex-husband, can’t seem to let go of the woman she once was. They want the old Daphne, the one who put everyone else before herself. I intentionally gave Daphne a secret crush on a younger man and had her pay attention to her sexuality. Women of a certain age are often set aside, as if their “ sexiness” has a shelf life. I wanted Daphne awakened to the fact that as a woman entering her forties, she still needed intimacy and affection. I wanted her to struggle with the guilt, be tempted, and have a little fun with someone…young enough to date her daughter.
Ellery is the girl I once was. I remember being invincible, tossing my curls over my shoulder as a flounced around in my cheerleading skirt. The world was about me and what I wanted, what I thought I deserved. I wasn’t a bad person, but I do remember my brother once bringing my requested shoes on a throw pillow, bowing, and saying “your slippers, my lady.” I led a charmed life…until life punched me in the face. It has a tendency to do that in your mid-twenties when you find out (gasp!) the world doesn’t revolve around you. So I wanted to take a princess, toss her in the mud, and see what happened. Ellery isn’t always likable, but she’s authentic. And by the end of the book, she sees her mother as a person and not just her mother. Both Ellery and Daphne have a big growth arc in this book.
Room to Breathe has secrets, twists, bad decisions, surprises, and angst, yet it also has humor, heat, and heart tugs. I love the guys in the book - Clay (the hot contractor), Gage (Ellery’s surprise crush) and Evan (the vineyard owner) and I really like the interactions between Ellery and Daphne. I think readers will recognize themselves most in Daphne, but they’ll also remember how hard it is standing on one’s own two feet as Ellery must do. I’m proud of this book about letting go and taking the lemons that life hands you, tossing them, and pouring a glass of wine. Cheers to all the women who aren’t afraid to start over and create their own new paths! 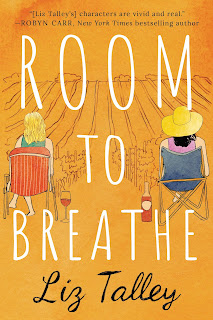 For a good part of Daphne Witt’s life, she was a supportive wife and dutiful mother. Now that she’s divorced and her daughter, Ellery, is all grown up, Daphne’s celebrating the best part of her life, a successful career, and a flirtation with an attentive hunk fifteen years her junior...who happens to be her daughter’s ex-boyfriend.
Ellery is starting over, too. She’s fresh out of college. Her job prospects are dim. And to support her fiancé in med school, she’s returned home as her mother’s new assistant. Ellery never expected her own life plan to take such a detour. With no outlet for her frustration, she lets an online flirtation go a little too far, especially considering her pen pal thinks he’s corresponding with her mother.
As love lives tangle, secrets spill, and indiscretions are betrayed, mother and daughter will have a lot to learn—not only about the mistakes they’ve made but also about the men in their lives and the women they are each hoping to become.

“What are you trying to say?” Daphne asked. Ellery always tried to get her to go to exercise classes, but Daphne preferred running most days. Organized classes had never appealed to her. Exercise was her escape, a time she could jab in her earbuds and listen to podcasts or a book that didn’t feature poodles and tea parties.
“That you isolate yourself out here. Hanging out with Pop Pop and Tippy Lou isn’t exactly being social. You can make friends in these classes, plus use muscles you never knew you had.” Ellery rose and smoothed the T-shirt swing top she wore over a pair of ripped boyfriend jeans. Several strands of delicate gold chain were layered around her neck. Her daughter somehow managed to look stylish and trendy in sloppy clothes. Daphne always looked...well, sloppy in sloppy clothes.
“Maybe,” she conceded, only because her daughter was unfortunately correct. She enjoyed visiting her father and playing dominoes with his friends, even if they were out of her age range. And her neighbor Tippy Lou Carmichael, while delightfully droll and enigmatic to the point of oddness, wasn’t going to go shopping with her or out to drinks. Tippy Lou preferred herbal tea on her front porch while she watched the feral cats she fed every morning chase lizards and laze about in her garden.
Daphne had always been the type of person to have only a few close friends. Though she’d cultivated friendships with many of the other teachers at Saint Peter’s Day School, where she’d worked as a teacher’s aide for fifteen years before staying home to write, she’d never been good at being social. She had church friends, a book club, and knew a few local writers who wrote professionally, but her best friend, Karyn Little, had moved to Idaho with her new husband over a year ago.
In a few short years, she’d lost her husband to self-centeredness and her BFF to the land of potatoes.
“Not maybe. Definitely,” Ellery said, looking over at her.
“Maybe I’ll try it.” Going to the class with Ellery might help their relationship, something that Daphne couldn’t seem to get back on track. She didn’t know what was wrong, how she should act, whether she should have given Ellery a job or not. Daphne had only wanted to make things better for Ellery. That’s what every mother did, right?
But Ellery had grown more and more distant over the past few months. Daphne suspected that it had something to do with something Rex had said, but Ellery wouldn’t open up. Any time Daphne asked her what was bothering her or if she wanted to talk, her daughter would tell her everything was “fine.” She’d begun to hate that word.
“I’m pretty much done for the day. I have to mail these packages. These are a few of the winners from your online party.” Ellery picked up a bag full of colorful pink envelopes, walked out the door and right into Clay.
“Whoa, hey, Elle,” he said, grabbing her elbow and steadying her. “I haven’t seen you in forever.”
“I saw you last week at Elmo’s,” Ellery said, shrugging off Clay’s hand. “But I guess you were too trashed to remember?”
“Hey, I was celebrating a new contract, but, yeah, I guess I had a few too many.”
“Honestly, Clay, it’s time you grew up,” Ellery said, pushing past him before spinning back. The Tom Ford scent she wore tickled Daphne’s nose.
“Guys never grow up, do we?” Clay joked.
“Some don’t.” Ellery gave him a flat look.
Her daughter had dated several guys in high school but had been tight-lipped when it came to information on what had happened between her and Clay. Daphne vaguely remembered a dustup with the head cheerleader for a rival school. Ellery had been only a sophomore, and Daphne remembered Clay being her daughter’s first heartbreak. Ellery had rebounded quickly with the quarterback for the Riverton Falcons. She had an uncanny ability to hook a new, even cuter guy after each successive breakup through high school and college.
Point in case—Josh was so pretty angels sang when he walked by.
Daphne still didn’t know her soon-to-be son-in-law very well because he was always studying, but he seemed to truly care about her daughter. And that was what mattered most.
“I’m out, y’all.” Ellery disappeared.
Clay turned his pretty blue eyes on Daphne. “Sorry to interrupt. I wanted to get your opinion on the marble. They sent two different samples in your color range. One has a lot of movement, the other is pretty simple.”
“Sure, I’ll take a look,” Daphne said, following him outside her office and into the heat of late morning.
Ellery tossed the bag of packages into the narrow back seat of her sleek new Lexus and gave them an absentminded wave.
“She’s a firecracker,” Clay said with a smile before jogging down the front porch steps. Today he wore a T-shirt. Thank God. The jeans fit him like a second skin, though. So now she had to contend with the butt thing.
Not only had she practically drooled over a shirtless Clay yesterday, but she’d actually rated the bag boy’s backside that morning at the grocery store. Thankfully Steve the bag boy was older than Clay, but she was now convinced her libido had written a memo titled “Take Care of Your Sexuality before You Mount the Bag Boy.” She wondered if something was wrong with her hormones. Or maybe she was ovulating. Something other than going middle-aged crazy.
Wait, was turning forty years old hitting middle age?
Nah. And technically she was still thirty-nine for the next two months. 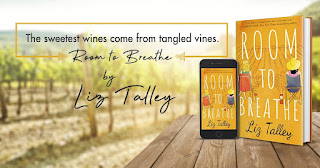 A finalist for both the Romance Writers of America’s prestigious Golden Heart and RITA Awards, Liz Talley has found a home writing heartwarming contemporary romance. Her stories are set in the South, where the tea is sweet, the summers are hot, and the porches are welcoming. She lives in North Louisiana with her childhood sweetheart, two handsome children, three dogs, and a naughty kitty.

a Rafflecopter giveaway
at November 04, 2019