Book Spotlight on The Fall of Legend by Meghan March (REVIEW)

It’s a sizzling tale of opposites attracting in this series starter that will have readers on the edge of their seats from the first page to the last.  Keep reading to get a tempting taste of The Fall of Legend by Meghan March, along with my impressions of this book, then add this first installment in the Legend Trilogy to your bookshelf! 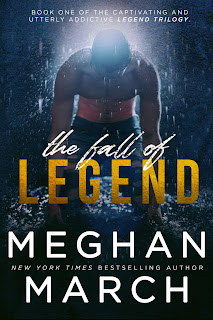 We come from two different worlds.
I’m from the streets. She might as well live in an ivory tower.
I made my living with my fists. I doubt she could even throw a punch.
Our paths never should have crossed.
We never should have met.
That doesn’t change the facts.
I would sell my soul to taste those red lips.
Fight the devil himself to hear her laugh.
Burn in hell to have a single night.
Scarlett Priest shouldn’t even know men like me exist, but sometimes temptation is stronger than will.
If this is how I go down, it’ll be worth every second of the fall. 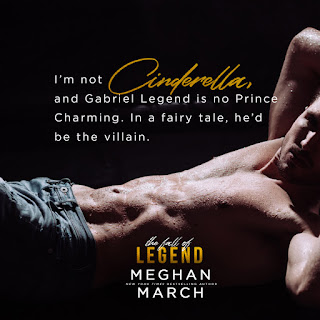 Ms. March has become my go-to author for duets and trilogies, having previously written many sizzling and thoroughly entertaining series, with this latest trilogy just as captivating.  With an unforgettable opening scene between the main couple, along with combustible banter and a slow and steady pace, this series starter gets off to a satisfying start that kept me glued to the pages and now counting down until the next installment hits bookshelves.

Gabriel Legend is larger-than-life when it comes to how others see him.  To himself though he’s someone who came from rough beginnings, struggling to make something of himself while fighting to make money in order to finally leave his questionable past behind.  With the opening of a club bearing his name he hoped to become respectable, but an opening night shoot-out leaves his business on the cusp of closing and him desperate to save it.  Saving it means negotiating with a woman very different from himself whose popularity will bring crowds and money rolling in.  It also brings unexpected attraction which will change both of them irrevocably.  Gabe’s a drool-worthy hero with a background that weighs heavily on him and has him wanting to prove himself.  He doesn’t want to count on others to help him, especially a woman after being betrayed by one before, but an impulsive act by his “brother” leaves him no choice.  There’s an air of vulnerability to him too that endeared him to me and made him a unique kind of hero that left me protective of him.

Scarlett Priest is a woman who can make or break a business just by showing up.  From magazine articles to the internet her face is everywhere as every move she makes is charted.  As the daughter of a supermodel mother and a master businessman father, Scarlett appears to have it all.  Behind the facade though is a woman who misses her mother, after losing her to cancer, and longing to make her father proud in a fruitless endeavor.  When Scarlett first meets Gabe she’s sure she’s going to be killed but as their meeting progresses a strong and assertive side emerges from her that made for some very combustible negotiations that will put them in close quarters.  It’s clear that she and Gabe are complete opposites but their attraction to one another is palpable with this book laying a sizzling foundation to their pairing.  With each turn of the page you could see Scarlett start to evolve, no longer a pampered princess.  She’s strong-willed from the start, self-assured and now ready to live her life to the fullest.  Meeting Gabe definitely gives her the chance to live a life she’s never lived before and it had me cheering her on every step of the way in this entertaining series starter.


On a whole this was a well-crafted tale of opposites attracting set amidst a dangerous world that brings together a man from the wrong side of the tracks and a woman who has everything.  The main couple is larger than life, crackling from the moment she ended up on the floor of his office, with a connection that  slowly builds.  It’s a slow burn pace that greets readers here, a pace that digs into the main couple’s pasts that leaves you rooting for them every step of the way.  Morsels of mystery were scattered throughout this first installment too to keep readers intrigued and hoping for answers in future installments. Alongside this compelling main couple were a few equally unforgettable secondary characters.  The two characters I was most drawn to were Q and Bump, men who work for Gabe but who were more like family.  Q was quiet and commanding while Bump was impulsive and clearly had some sort of mental disability.  I found his words and deeds funny, I found a kind heart that drives him to be protective of Gabe, and I look forward to more interactions between him, Scarlett, and Gabe.  By the turn of the final page readers will find this a captivating series starter with plenty of secrets and lies that need to be dealt with courtesy of Ms. March’s talented storytelling. 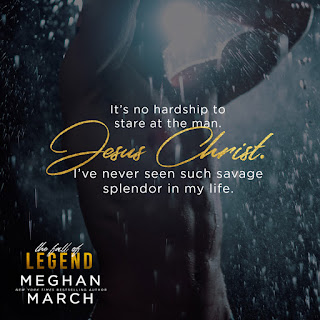 THE NEXT INSTALLMENTS IN THE LEGEND TRILOGY.... 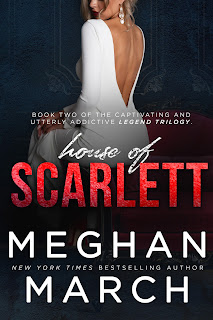 THE HOUSE OF SCARLETT
Releasing on December 10th
Gabriel Legend is unlike any other man I’ve ever met.
He came into my life like a hurricane, shattering all my assumptions and preconceived notions.
I wasn’t prepared for him. I wasn’t prepared for any of it.
But life doesn’t wait until you’re ready.
Whatever happens next, I know one thing for certain.
I will never be the same Scarlett I was before I met him. 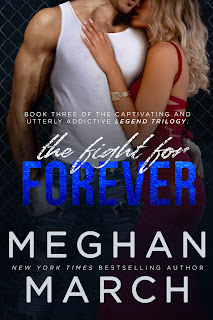 THE FIGHT FOR FOREVER
Releasing on January 14th, 2020
You can only keep what you can protect.
That’s all I’ve ever known. It’s the way I’ve lived my life.
Now, everything I never knew I needed is at risk, and I’m not letting anyone take it from me.
I won’t let anyone take her from me.
They say love is a battlefield, so I’m ready for war.
This time, it’s the fight for forever.

Making the jump from corporate lawyer to romance author was a leap of faith that New York Times, #1 Wall Street Journal, and USA Today bestselling author Meghan March will never regret. With over thirty titles published, she has sold millions of books in nearly a dozen languages to fellow romance-lovers around the world. A nomad at heart, she can currently be found in the woods of the Pacific Northwest, living her happily ever after with her real-life alpha hero.
Sign up for Meghan's newsletter and receive exclusive content that she saves for her subscribers.
To get the inside scoop on a daily basis, search Meghan March's Runaway Readers on Facebook and join the fun.